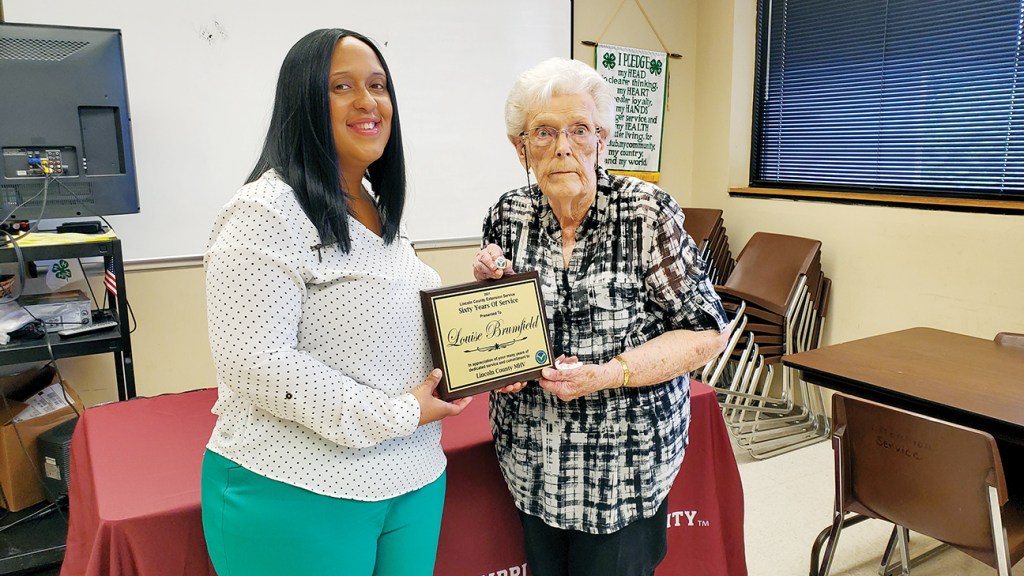 Photo by Brett Campbell / Extension Agent LaToya Evans presents Louise Brumfield with a lapel pin and plaque in honor of her more than 60 years of volunteer service.

Louise Brumfield has volunteered with the Lincoln County Extension Office for more than 60 years.

A member of the Auburn community in southwest Lincoln County, she first got involved with the Extension in 1957, because she wanted to learn life skills from the home economics department of the state-run educational system.

“I would say it was in 1957,” Brumfield said. “I joined to learn — specifically in sewing, crafts and things.”

She will be 94 years old on her birthday next week, and is a member and regular attendee of Adams United Methodist Church.

Brumfield has taken the skills she learned through the Extension and invested in the lives of hundreds of other people over the past six decades by teaching what she has learned.

“I have had classes in quilt making, and crochet classes. I have been a judge at our county fairs in several counties — Jefferson, Franklin, Adams, Pike. I have judged housewares and materials, arts and crafts, all handmade,” she said.

She has also been president of the Lincoln County Homemakers Club “many, many times,” she said.

Most of her involvement is performed from her home these days.

“I crochet. I do my daily Bible reading, watch television, do puzzles and I crochet a lot to stay busy,” she said.

Brumfield said she’s proud of the work she has done and the work done by both those who came before and alongside her. Her favorite times have been teaching others and helping them learn skills.

Extension Agent LaToya Evans presented Brumfield with a lapel pin and plaque to commemorate her more than 60 years of volunteer service.

“I want to thank Mrs. Brumfield for her dedicated time, being willing to help learn and teach others the things she has learned, whether it was crocheting, sewing … just her ability and wanting to teach others. It’s so important to learn those life skills,” Evans said. “We’re just so thankful for her.”

Brumfield said she would love to see more young people get involved in what the Extension has to offer.

“Join — with the idea of learning,” she said. “When you do join, plan to learn as much as you can, because what you learn can’t be taken away from you.”