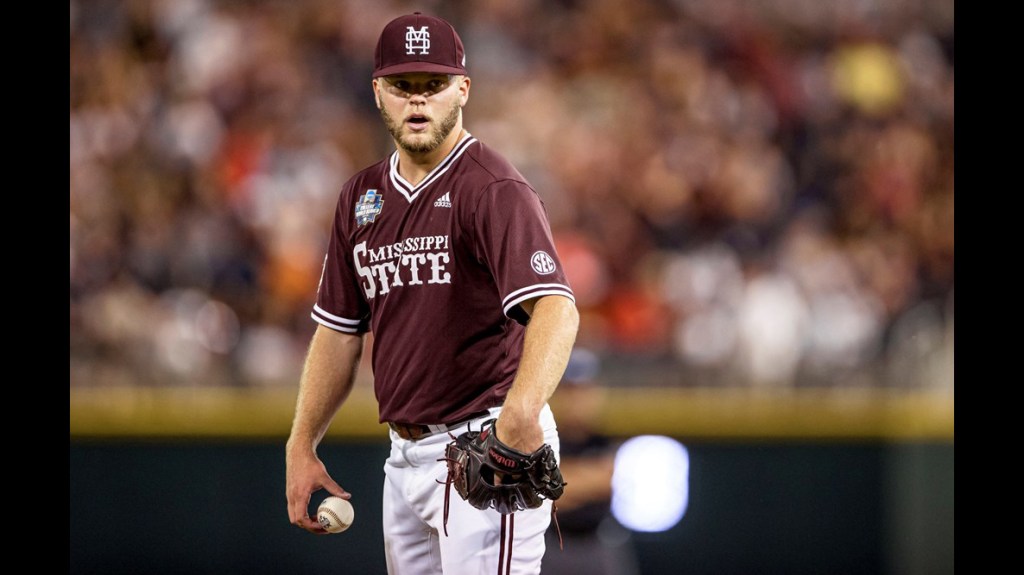 Photo by MSU Athletics / MSU closer Landon Sims looks to the plate Tuesday in the College World Series against the University of Virginia.

For seven innings Tuesday, Mississippi State had few baserunners and fading hope as the University of Virginia played strong defense behind hot pitching to hold them hitless in the NCAA College World Series.

UVA led 4-0 and MSU fans, whether watching at home or live in Omaha, were doing all they could — praying, moving seats or using other superstitious ideas — to wake up the Bulldog bats.

The win means State is the only remaining unbeaten in their bracket of the CWS. They’ll play the winner between Texas and Virginia Friday at 6 p.m. A win in that one puts MSU into the CWS championship series.

The biggest hero of the Tuesday win might have been the MSU bullpen which gave up just a single run in 7 2/3 innings of action.

Bulldog starter Christian MacLeod gave up one run in the first and three more in the second before forcing head coach Chris Lemonis to use his pen.

Preston Johnson, a product of Copiah Academy and Hinds CC transfer, was the first reliever up and struck out three batters of the 10 he faced. Johnson scattered three hits and set the tone as MSU settled in and cooled UVA down.

Johnson got back-to-back strikeouts with the bases loaded after taking over from MacLeod.

Virginia starter Griff McGarry struck out eight in 7 1/3 innings. McGarry started the game with an ERA of 6.06 and didn’t have a win on the season but had been huge for UVA in their Super Regional prior to Omaha.

The ace of the UVA staff during the COVID-19 shortened 2020 season, McGarry was demoted to the bullpen during the year, but appeared to find his mojo in the postseason.

Waiting for a spark, MSU got one in the top of the eighth off the bat of true freshman Kellum Clark. A product of Brandon High, Clark hit a two-run home run to right field that broke the spell McGarry had been weaving.

Pinch hitter Josh Hatcher then singled and moved to third via a Rowdy Jordan double as UVA reliever Zach Messinger didn’t record an out after taking over for McGarry.

Virginia head coach Brian O’Connor went to his sixth-year senior reliever Stephen Schoch with one away and runners on second and third.

Schoch has been a media darling of the NCAA tournament after giving a hilarious post-game interview in the regional round.

His arm had been giving him issues since then though and he’d not yet made an appearance for the Cavaliers in either the Super Regional or CWS.

With first base open and Allen having the best batting average on the team, surely Schoch wouldn’t give the senior from Mobile something to hit — plot twist, he did.

On the second pitch of the at-bat, Allen waited on a breaking ball that he cranked into the MSU bullpen for a 5-4 lead.

TD Ameritrade Park in Omaha doesn’t allow cowbells, but the Mississippi State contingent made plenty of noise without them as Allen’s huge hit came down.

Jordan and Allen are roommates and have been part of three CWS trips during their time wearing Maroon — Tuesday was the 27th game in Omaha for Allen to play in.

An important insurance run came later in the inning as Dubrule came up to bat for a second time in the frame and drove in a run with a single to make the score 6-4.

UVA had a solo home run in the eight, but Sims went 1-2-3 in the bottom of the ninth to preserve the win.

MSU is trying to get back to the CWS finals after reaching the three-game series in 2013 against UCLA.