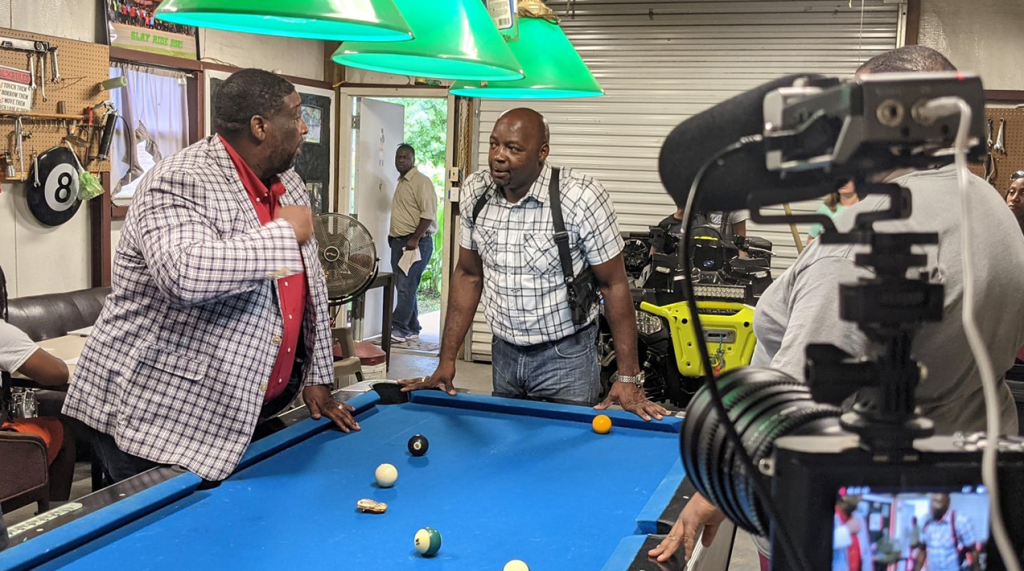 Photo submitted / Photo submitted From left, Kendrick Barnes and Melvin Pittman portray police officers in a new movie filming in Brookhaven and surrounding areas. Pittman, who is also writer and director of the film, hopes the faith-based “Where’s God?” will make a difference in the lives of viewers.

A Brookhaven actor-director-producer is working on his second film from behind the camera — “Where’s God?” currently filming in his hometown, as well as nearby locations.

Melvin Pittman is no stranger to the film camera on either side. His directorial debut was “Christmas Arrest,” filmed in Mississippi and produced by Saint Studio Films in Pelahatchie as a segment of the four-part 2020 movie “Christmas.”

He’s had extra and acting roles in 13 films, all within the past two years, with seven acting credits on the Internet Movie DataBase (IMDB.com). Earlier this year, he played a police officer in the yet-to-be-released “A Day to Die,” starring Bruce Willis and Frank Grillo.

The experiences have stirred a creative fire in Pittman, an ordained minister, who says he wants to use this new platform as a way to share truth about God.

The new film’s title “Where’s God?” asks a question Pittman says everyone has at some point, and also hopes to answer it.

“We all question where God is at different points in our lives, but we never come to the conclusion that God is always nearby,” he said. “Along the way, He gives us signals to let us know He is there.”

The film centers on a detective and his partner — the detective’s wife is murdered and the officer loses his trust in God.

“He starts saying, ‘If God were present, none of this would have happened,’” Pittman said.

The detective begins searching for revenge in looking for the killer, and ultimately discovers God was never absent. Meanwhile, his partner is going through a rocky marriage, struggling with his own faith even as he tries to help the detective keep from abandoning his.

“It brings in different Bible stories and scenarios,” Pittman said, to use familiar situations to help people understand the point of faith.

When the detective finally discovers the identity of the killer, he is forced to choose between killing to satisfy his desire for revenge, or forgiving and leaving judgment to the law and to God.

“We want revenge so bad. We want to hurt the person who hurt us or hurt our loved ones, but God loves them,” Pittman said. “So we ask where is God through this whole thing? We complain to God, ‘I don’t see You working,’ but He says, ‘I’m right here beside you. You just have to see Me.’”

The script combines action, comedy and drama to convey “the impact of God being there,” the writer and director said.

Pittman’s desire is to get the film into theaters, especially here in Brookhaven.

He will be filming in Monticello, Wesson and Brookhaven. Some of the Brookhaven shoots are coming up on weekends in July, and the director said he’s still looking for people of all ages, races and looks to play unpaid background characters or extras. Notices will be on his personal Facebook page.

The production has depended completely on God, he said, moving on faith. “And He’s providing,” Pittman said.

He’s filming in Lincoln, Lawrence and Copiah counties because he hopes other filmmakers will see the area and want to bring their projects to the area.

“Brookhaven, Wesson and Lawrence County all have good landmarks, and I want people to see them,” Pittman said. “Brookhaven stands up to its name of a Home Seekers Paradise.”

Team 3C’s Productions is Pittman’s production company, completely focused on faith-based films. He hopes to complete two movies filmed in the area before the end of 2021, and four in 2022.

“We hope Brookhaven will get something out of it, that somebody’s life will get better,” he said. “If God is in the mix, people get their lives changed.”

“Hopefully we can make Brookhaven, Lawrence County and Wesson proud.”