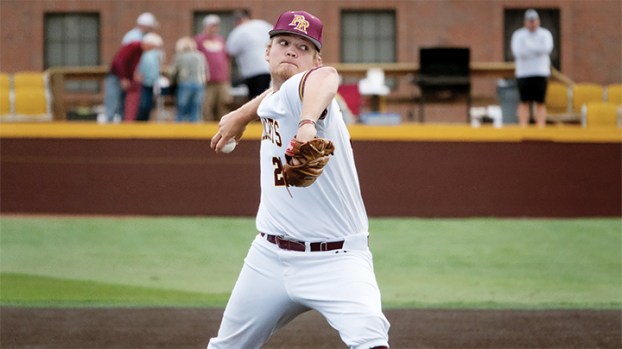 Photo by PRCC Athletics / Enterprise product Landon Gartman was masterful this season for Pearl River Community College. Gartman recently added to his long list of awards by being named NJCAA Pitcher of the Year. 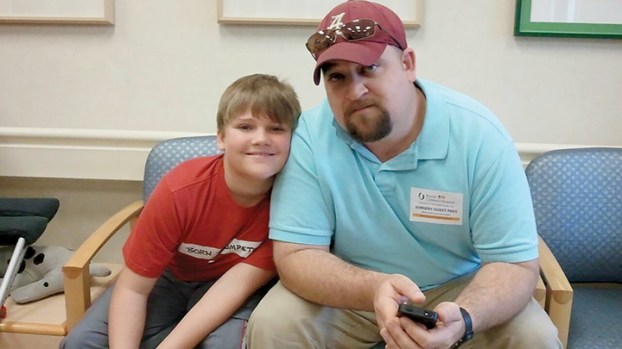 Photos submitted Above, Landon and Brady Gartman do their best to smile before Landon’s hip surgery that would leave him in a wheelchair and on crutches for the next 18 months. 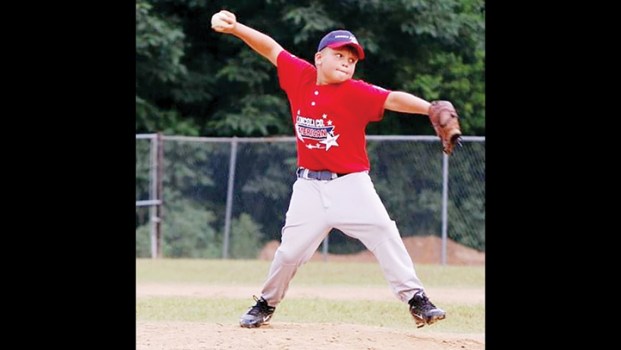 Photo submitted / Inset, Gartman rears back to throw as an All-Star prior to suffering from a hip condition that would take him away temporarily from the game he loved.

The big right-hander knows where he’s going next to throw the ball, that’s to pitch at the University of Memphis.

What can’t be overlooked are the obstacles Gartman overcame in his journey to becoming a future Division I pitcher.

Sitting in a fifth-grade science class at Enterprise, Gartman went to stand up out of his desk and found himself lying on the ground, unable to move his right leg.

The diagnosis of Perthes disease was one that Gartman’s parents Brady and Shannon already knew about.

The rare condition affects children and occurs when the blood supply to the rounded head of the femur is temporarily disrupted.

The condition can cause the weakened bone of the head of the femur — think the ball in your hip — to collapse.

That’s what happened to Landon when he went to stand up in science class. The ball in his hip collapsed and sent him to the floor.

Surgery followed and in one of those pre-surgery meetings with a doctor, Landon heard the worst part of his diagnosis.

“I’ll never forget the doctor asking me if I played any sports and I told him I played baseball,” said Gartman. “He told me that my baseball playing days were over and that I should take up a different sport, like swimming.”

As parents, Brady and Shannon were both most worried about Landon’s current and future health. But they knew how important baseball was to their 11-year-old son.

“Baseball takes a backseat when you’re talking about being in a wheelchair for an extended time,” said Shannon. “At the same time, you know it wasn’t taking a backseat in his head.”

The drive home from that memorable doctor’s consultation is one that Brady will never forget.

The damaged hip was repaired in surgery as Landon was first confined to a wheelchair and then ended up on crutches. He had to learn how to walk again and build up his strength through countless therapy sessions.

He’d go outside in his wheelchair and throw the baseball with Brady — never giving up on his goal of getting back on the diamond.

“I honestly feel like that time where I couldn’t throw using my legs made my arm stronger,’ said Landon. “Once I was out of the wheelchair and on crutches, I’d still have to sit in a chair and throw to keep my weight off my leg and hip.”

As an 11-year-old, Landon was dealing with the worst of Perthes at a later age than most children who see the condition usually worsen in ages 7-8.

“He’d been diagnosed with it when he was 10 and had come home unable to move his leg once before it collapsed in class,” said Shannon. “His case was considered atypical because of his age, but his recovery was pretty atypical as well.”

During his confinement to a wheelchair and then crutches, Gartman didn’t grow — which was a good thing.

He finally hit his biggest growth spurt as a 14-year-old, long after his hip had completely healed. Approximately 18 months after Gartman was told to take up swimming, he got another bold command from a doctor checking him out — go buy a lottery ticket.

“We went in for a checkup to see if my hip was strong enough to resume sports,” said Landon. “I’ll never forget the doctor looking at me and saying, ‘Young man, your father needs to either go to the casino or buy a lottery ticket because the chances of your hip recovering this well are one in a million.’”

Already a Dixie Youth All-Star prior to his injury, Gartman was able to come back to the game he loved as he returned to playing in the local baseball league and then playing travel ball.

One of the travel ball teams he played on practiced at Pearl River Community College. PRCC offered him early and Gartman signed with the school as a senior.

He was dominant in his final year pitching for Enterprise, winning Daily Leader All-Area Most Valuable Player. Two years pitching on the college level have made him even better.

“My coaches at Pearl River cleaned up my mechanics,” said Gartman. “I’ve got more control now and can put the ball where I want it with way more consistency.”

Gartman feels like pitching for Memphis is another chance for him to further grow his game.

“I really loved the coaching staff there throughout the recruiting process — they’re just down-to-earth, good, Christian men,” said Gartman. “They’ve got good facilities and I’m going to be majoring in Engineering Technology. They recruited me to be a weekend starter and that’s what I plan on going there to do.”

The path from being a scared 11-year-old, listening to a doctor tell him his athletic dreams might be over, to the University of Memphis is one that Shannon knows her son has not traveled alone.

Those tough times when he was younger have made him more thankful for his current season of success. His father says it also made his determination stronger.

“He won’t give up on anything,” said Brady. “No matter what happens in the future, he’s already won.”

Gartman is soaking up the last bit of his summer vacation with his friends, family and girlfriend Brooke Foster. His time at Memphis and the work that comes along with being a college pitcher is fast approaching.

A decade after almost losing baseball, he feels like he’s just getting started.

“I plan on playing baseball as long as I can,” said Gartman with a laugh. “And I mean as long as I can. If I can still be on a field playing when I’m 40 or 50 years old, that sounds great to me.”