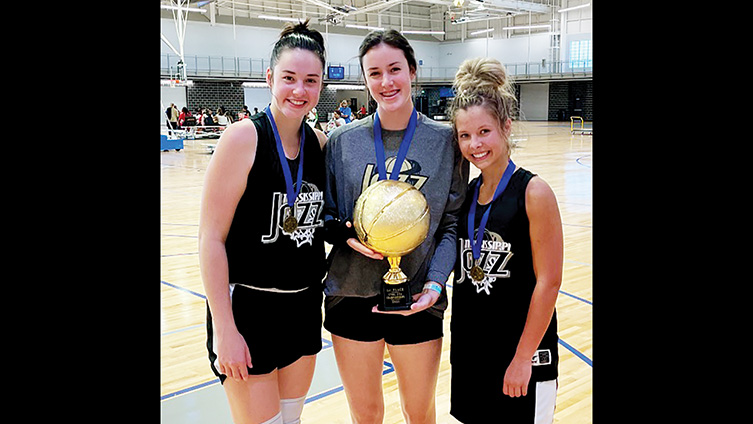 Thousands of hoopers are converging this week in Orlando for the WBB National Championship at the Orange County Convention Center.

The tournament is put on yearly by National Basketball Exposure and is one of the biggest AAU tournaments on the summer circuit.

The Mississippi Jazz Elite are a Hinds County based AAU program that has teams competing throughout the week in Orlando.

The Jazz are led by Henry Gantz, whos’ familiar with the BA trio as he’s the girls’ basketball coach at Central Hinds Academy in Raymond.

Gantz started the team at the request of a couple of his Central Hinds players and their parents. He has previously coached at Central Private and Copiah Academy and is well versed in the ins-and-outs of MAIS (Midsouth Association of Independent Schools) basketball.

AAU basketball wasn’t completely foreign to Gantz, but the success that’s come since starting the program in 2017 has been greater than even he could imagine.

“Most of our team is from Mississippi with the majority coming from Hinds County and the surrounding areas,” said Gantz. “There are 62 girls spread out amongst the different age groups and some of them come from as far away as Memphis and Hammond. Our tryouts are open to everyone, but all of kids are actually from MAIS teams this year.”

The summer has been one of wins for Gantz and the Jazz. The Gates sisters and Warren were part of a team that won the CYBL USA Championship in Hoover, Alabama last month.

Earlier this month the 17U team also made the finals of the Battle in the Boro, a huge tournament held every year in Louisville, Kentucky.

A last second layup by Lillie Gates on an assist from Warren put the Jazz into the quarterfinals in Louisville.

Gantz says he’s seen all three of the current Lady Cougars grow throughout the spring and summer slate of games.

“We’ve really stayed on Anne Brantley to be more aggressive and she’s done that,” said Gantz. “In AAU you’ve got so many teams that are going to trap and pressure you in order to speed the game up. You’ve got to go at them and that’s something that AB has done well for us.”

Warren has started at point guard for BA since her eighth-grade season when the Lady Cougars won a state championship with her directing the offense. She’ll be a senior next season for coach Ron Kessler.

“Emma Gates has been our most improved player, hands down,” said Gantz. “She really took to the style of play in AAU very quickly and has gotten better and better with every tournament.”

Emma and her twin sister Lillie will both be juniors next season for BA. Lillie has seen her recruitment pick up this summer after getting her first collegiate offer from Mississippi College.

“Lillie is the real deal,” said Gantz. “Both her and Emma are used to being the tallest player on the court at around 6-foot and I don’t’ think they’ve had a game this summer where that was the case. Going against bigger, stronger competition is just going to make them better.”

The Jazz also have two younger BA players in Anne Rylea Thurman and Ella Smith that both play with the program.

Gantz gets great enjoyment in seeing his players showcase their skills in front of college recruiters and other talent scouts. Even when he knows he’ll see them again in a much different situation once regular season basketball kicks back off in the fall.

“Our girls can already play when they get to us,” said Gantz. “We’re just trying to mold them into a team while showing everyone’s different abilities.”

“My girlfriend and I were talking the other day about how well the Gates twins and AB were playing, and she reminded me that we’ll likely face Brookhaven Academy in the South State Tournament next year,” said Gantz with a laugh. “I’m OK with being someone that tries to help them be better players though, even if they are going to be our opponents when the season starts. This group that Lillie, Emma and AB play with is filled with kids that play against each other all year long, but in the summer, they’re playing together and supporting each other like family.”

Friday the Jazz will open bracket play with a matchup against Wisconsin Playground Elite and then will play Saturday morning against Kentucky Premier.