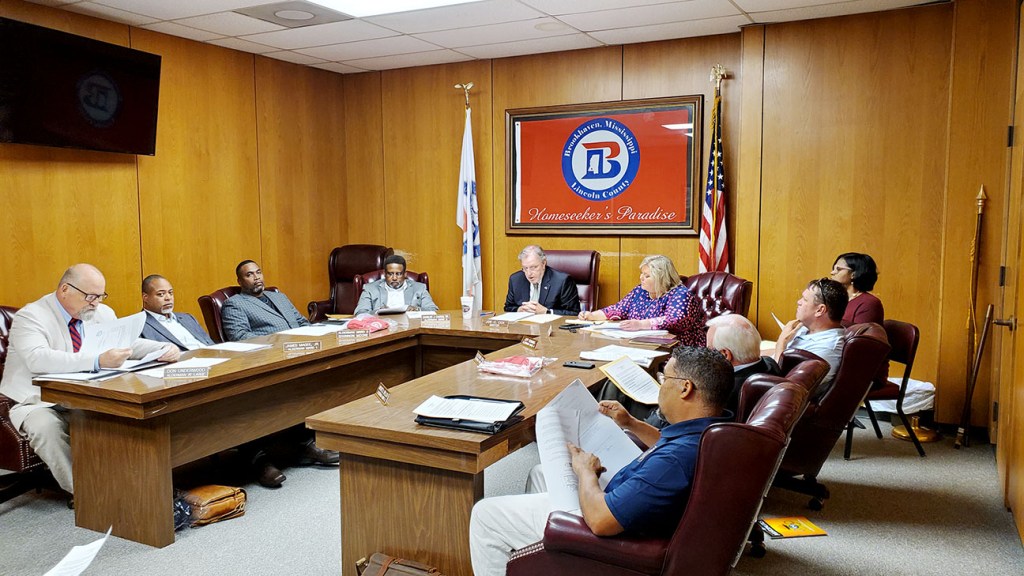 A city attorney has been hired by the Brookhaven Board of Aldermen and appointments for city judge and city prosecutor were postponed once again.

At the board’s previous meeting — the first for this newly-elected and re-elected board — all three appointments were tabled and candidates were asked to attend the July 20 meeting. Mayor Joe Cox’s suggested appointments were Shelley Harrigill for city prosecutor, Greg Malta for city judge and Brad Boerner for city attorney.

Eight candidates were expected to present and seven attended the meeting. Candidates were presented alphabetically by last name in consideration for each office.

Vicksburg attorney Ikeecia Colenberg was the first candidate for Brookhaven Municipal Court prosecutor, but she was not present.

Brookhaven attorney Harrigill, who recently completed her four-year term as Ward 6 alderwoman, took the podium and made her introductions. Ward 2 Alderman Shannon Moore asked acting city attorney Brady Kellem if there was a statute that would require Harrigill to wait one year after serving on the board before seeking a city appointment. Kellem said he did not know but would research the issue.

Following a closed-door executive session discussing personnel at the end of the night’s meeting, the board voted to table to appointment and keep attorney Cheli Durr in the temporary assignment.

Brookhaven attorney Greg Malta, who just ended a term as city prosecutor, was the first candidate for Municipal Court judge. Malta said if appointed he would focus on more rehabilitation over punishment for offenders in the all-misdemeanor court. There were no questions for Malta.

“Rather than pay one person to do the job, you can appoint both of us and split that same pay between us,” Martin suggested.

“Two for the price of one,” Moore said.

Martin and Smith said they could take on the city court’s workload and set bonds immediately for individuals arrested on misdemeanors, just as they do in Justice Court, without the waits that are currently taking place. A person must have bond set within 48 hours of arrest.

The duo also discussed a focus on rehabilitation over jail time and fines, and referenced successes they had seen through Justice Court.

Smith presented a copy to each board member of a Mississippi statute allowing non-attorneys to be appointed to the city court seat if the person is currently a sitting judge elsewhere. Neither Martin nor Smith are attorneys.

Kellems verified for the board that it would be legal to appoint Martin and Smith, should the aldermen decide to do so.

The final candidate for the judge position was Jackson attorney Louwlynn “Van” Williams. Like the other candidates, Williams said she would focus on rehabilitation for offenders brought before her, if appointed.

“A lot of adults with problems now started out with lower level misdemeanors,” Williams said. “They’re having difficulties now because of a criminal record in their past.”

The attorney, who is also a Mississippi College adjunct professor as needed, said rehabilitation would help prevent those types of problems later in life for many people.

Following executive session, the board voted to table the appointment until an question of concern could be addressed by the office of Attorney General Lynn Fitch. Moore and Smith were appointed to the city bench for the interim.

Three candidates appeared for the appointment of attorney to the board of aldermen.

Brookhaven attorney Nathaniel Armistad was the first candidate. He gave a brief presentation on his background in and ties to the area. Armistad serves as board attorney for several school districts within the state, and has served as assistant writing instructor at the University of Mississippi and adjunct professor at Alcorn State University.

Boerner, who just completed his term as city judge, was the second candidate. He focused on his experience of handling more than 2,100 cases as an attorney and his ties to the city, which make him “a vested candidate,” he said.

When Moore questioned what Boerner meant by the statement, the attorney clarified that he did not believe he was entitled to the position, but that his roots in the community made him an ideal candidate.

The final candidate for board attorney was Bogue Chitto lawyer Bobby Moak. The former long-time state representative and Democratic Party chairman stressed that his political affiliation would not influence anything he did for the board, and that his track record in the Legislature would confirm his ability to be impartial and provide only legal advice to the board.

Underwood stated in the previous meeting that — although he was a long-time friend of Moak’s — he would be “hard pressed” to vote for any candidate who did not live in Brookhaven. Grice also stated his reason for voted against Moak was due to residency.