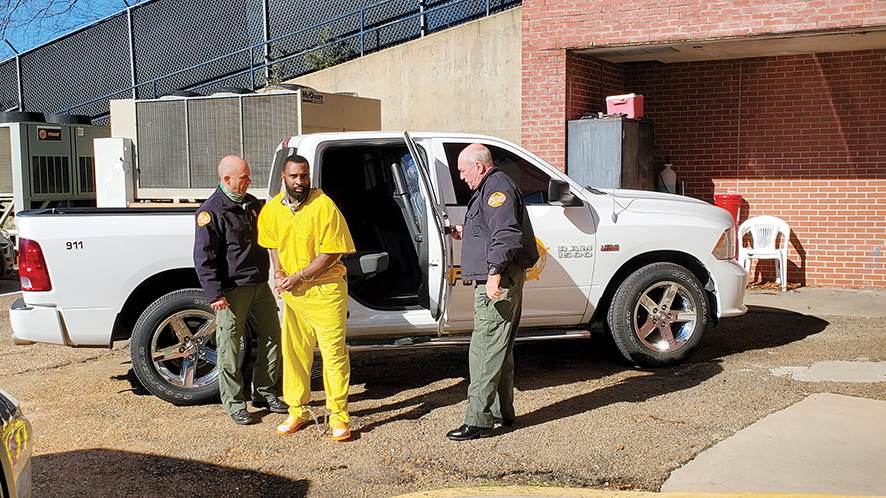 Photo by Brett Campbell / Marquis A. Flowers — accused of the 2018 shooting deaths of Brookhaven police officers Zach Moak and James White — is escorted from Rankin County Jail to the Lincoln County Jail for a court appearance Feb. 23, 2021.

A man accused of capital murder in the deaths of two Brookhaven police officers made a status appearance in Lincoln County Circuit Court Monday.

Defense attorney Kelsey Rushing — representing Marquis A. Flowers, accused of the shooting deaths of Officer James White and Cpl. Zach Moak in 2018 — told Special Judge Richard W. “Dickey” McKenzie his team was awaiting reports from experts on several matters and therefore had not yet responded to a pretrial questionnaire from the office of District Attorney Dee Bates.

Bates said the questionnaire was the only thing he had submitted to the defense. Bates requested the court set a September date to hear from the defense and any reciprocal motions from the State.

After reviewing the calendar, Judge McKenzie and the attorneys agreed to a final motions hearing on Tuesday, Sept. 14, with a possible carry over to Thursday, Sept. 16, if necessary.

During Flowers’ May appearance before McKenzie, the judge set the trial venue for the Pike County Circuit Court courtroom in Magnolia. The change of venue was granted in December 2020. Jury selection for the trial is scheduled to begin Nov. 8. A jury will be selected from Lafayette County.

Flowers was charged in December 2018 with two counts of capital murder in the shooting deaths of Cpl. Moak and patrolman White at a residence on North Sixth Street in Brookhaven, during the early morning hours of Sept. 29, 2018.