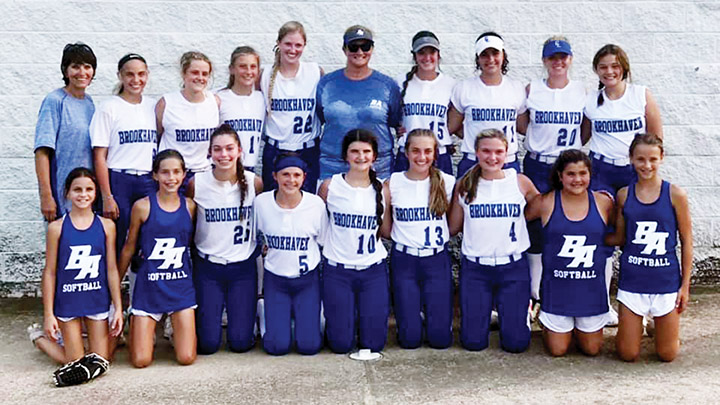 Photo submitted Brookhaven Academy is now 8-1-1 for the softball season after picking up two wins at home. They'll be back at home Monday when they host Bowling Green School at the BA softball field.

Coach Becky Flowers and her Brookhaven Academy softball team got the home portion of their 2021 schedule started with two wins this week over Copiah Academy and Hartfield Academy.

The wins move the Lady Cougar’s record to 8-1-1 on the season.

Copiah jumped out to a 2-0 lead Monday before BA responded with one run in the bottom of the first and one more in the bottom the third to tie the game at 2-2.

Both Copiah runs were unearned as senior pitcher Emily Claire Felder struck out nine and walked zero in the win. Felder was brutally efficient as she only needed 71 pitches — 60 of which went for strikes — to get the complete game victory.

The Lady Cougars committed three errors on the night.

A Bailee Goodson double in the first scored Madison Moak to get BA on the board and a solo home run from senior Abby Grace Richardson tied things up later.

Moak then put her team up for good with a solo home run in the bottom of the fifth inning.

Moak, Richardson and Goodson are all committed to play softball next season at Co-Lin while Felder is pledged to sign with Union University in Jackson, Tennessee.

A Felder groundout in the sixth added an insurance run when Maddie Bullock scored.

The win over Hartfield on Tuesday avenged the lone loss of the season for BA.

Brookhaven committed three errors while Hartfield had a pair of errors as well. The visitors from Flowood also outhit BA 9-5, but the home team held a 6-3 lead heading into the final Hartfield at bat.

With two away in the top of the seventh, Hartfield pulled within one via a two-run home run. Felder then walked the next batter before getting a groundout to end the game.

The big inning for BA Tuesday was the fifth as Moak reached via a two-out bunt to give her team its first base runner of the frame.

Richardson reached via a walk and Moak scored when Goodson singled to make the game 3-2 for the Lady Cougars.

Freshman Bailey Parks singled to load the bases and then eighth grader Miriam Wallace cleared them with a 3-RBI single. The inning ended with Wallace caught trying to advance to second.

Felder threw 98 pitches against Hartfield and struck out three while walking two. Three of the runs she surrendered were earned — all coming via the long ball.

Wallace had two hits for the Lady Cougars. Moak tripled in the third and then scored via a HA error.

BA will be in action Saturday in Clinton at the Tri-County Tournament. They’ll play Marshall Academy, Simpson Academy and Magnolia Heights Academy at Traceway Park.

Monday the Lady Cougars are back at home hosting Bowling Green School for a 6:30 p.m. first pitch.