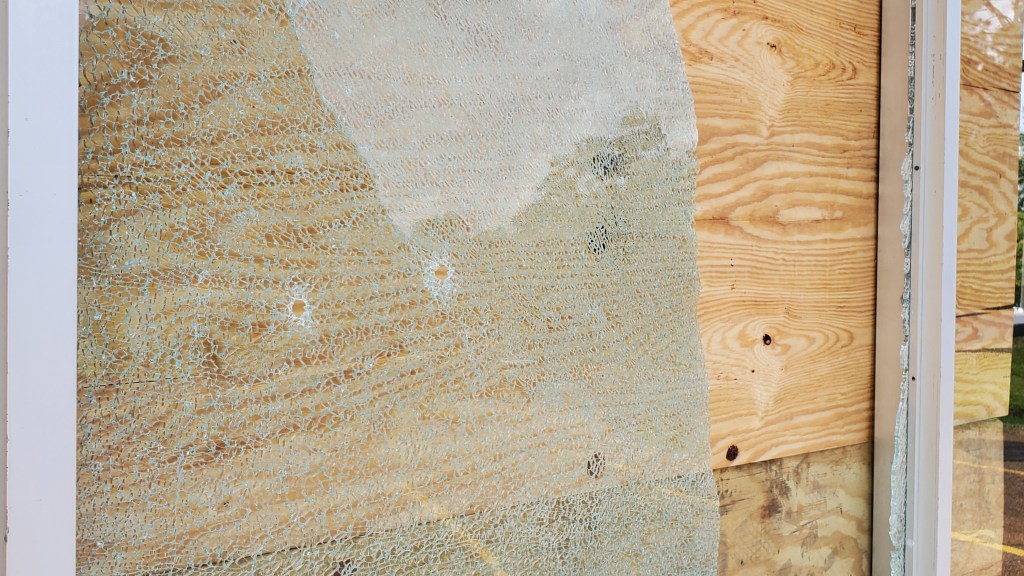 Photo by Brett Campbell/ Several windows in Brookhaven such as this business' have been shattered by vandals recently.

The culprits police believe are responsible for a string of recent vandalism in Brookhaven have been apprehended.

Over a few days, windows have been broken in businesses, homes and vehicles with small ball bearings or marbles, the type fired from slingshots.

Sunday, the police chief said his officers were working behind the scenes to put an end to the mischief. Collins said the vandals do not realize how serious what they are doing is — a person could be struck by a bearing or could use a weapon to fire at the person with a slingshot.

“We ask people to be vigilant and help us catch them before somebody gets hurt,” he said.

Monday as officers tracked down leads, Collins said the vandal or vandals would be caught and held accountable — “It’s just a matter of time.”

After the Monday night arrests, Collins expressed his thanks to the Civil Defense department and volunteers who took action and were the department’s eyes to help fight this crime.

“I would also like to thank all the hard-working police officers and staff who put in long hours and the community for all the help, and most of all I would like to thank God,” he said.

BeClean Cleaners was one of the businesses that suffered damage.

“They hit both our locations — on Monticello Street and Court Street,” owner Rockie Netherland said.

“One window was just cracked, the bearing didn’t go through it,” Netherland said. “One was pierced with a smaller bearing, but we haven’t been able to find it.”

“It’s not good for a small business when I’m having to spend all this money on repairs,” she said.

Brookhaven Barber Shop on West Cherokee Street is another business that lost its plate glass window to vandalism. Owner Jill Case is no stranger to losing storefront windows. Three deer crashed through her large window and glass door in July 2018, not long after she relocated her shop from Whitworth Avenue to that location.

Case said she found out about the damage Sunday morning. The damage is costly and frustrating, she said, but she’s going to take advantage of the situation for the good of her business.

“I’m taking the opportunity to rework the front of my business,” she said, “to make the window smaller, put in a new door frame — things like that.”

Netherland said although she is frustrated, she knows police are doing what they can.

“I know the police come and drive around our building and check on things because we see them sometimes at 4 a.m.,” she said. “I have cameras but I can’t cover everything and city property. And people who do this know how to avoid cameras to some extent.”

“I don’t have any answers yet on how to prevent this,” Netherland said. “It’s just sad to have to stop and spend the time and money. I hate to see it.”

At least one community plans to meet to discuss what home and property owners can do to help address crime.

Members of the Vernondale Neighborhood Watch has scheduled a meeting later this week “to discuss a path forward after the recent spike in crime in our area. It’s time to put some feet on some of the solutions suggested … We are a smart group of people, and together I know we can continue to have a safe and welcoming community.”

Collins believes the community working together with law enforcement is the only way to effectively catch criminals. He also had a message for individuals who have misdirected their anger over crime toward law enforcement officers, “blaming the very people that God chose to protect them.”

“You have no idea of the hours and the sacrifices these women and men make to solve just one case, or to protect our schools, children, our churches and our town,” the chief said. “Turn your anger to actions by installing good cameras, locking the doors on vehicles, not leaving valuable items in plain sight and if you see something, say something. Be our eyes. Call the police.”