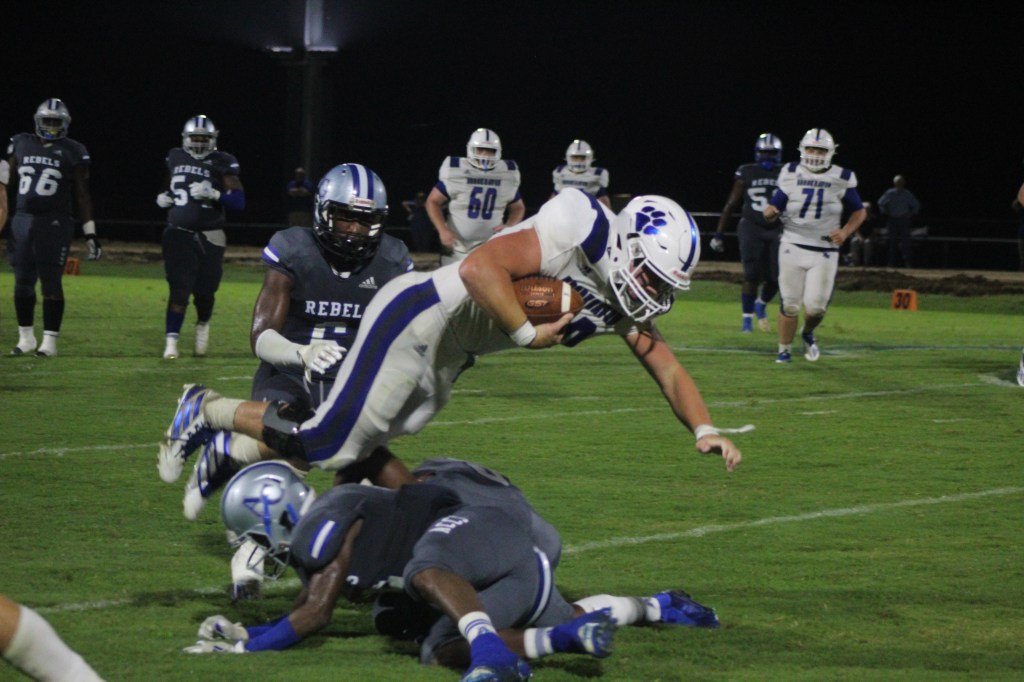 Photo by Hunter Cloud Brookhaven Academy senior Trenton Tarver gets taken down by a pair of ACCS defenders Friday in Natchez. BA will make their home debut Friday when they host Central Holmes Academy at 7 p.m.

The Adams County Christian School Rebels were able to run and pass the ball with equal success Friday against Brookhaven Academy in Natchez.

228 passing yards and three scores from freshman quarterback Coleman Carter and 107 rushing yards from sophomore running back JJ Claiborne helped push ACCS to a 46-21 win in the MAIS opener for both schools.

The offensive line of ACCS is the strength of the team and Friday they helped their unit gain 638 yards of combined total offense.

ACCS led 7-0 after one quarter and 26-0 at halftime.
That same big group of linemen that makes way for the Rebels on the offensive side of the ball turn around and also made a big impact defensively for ACCS head coach David King as well.

Fortenberry got BA on the board with 8:54 remaining in the third quarter when he scored on a 13-yard run.
Later in the quarter the Cougars got another TD when Trevor Fortenberry returned a kickoff 70-yards for a score.
The final BA touchdown of the night was a 5-yard touchdown pass from Rayce Stewart to Logan Alexander.

Tyler Fortenberry was the leader on the ground for the Cougars as he carried the ball nine times for 67 yards. Senior John Rivers Brown carried the ball eight times for 26 yards. Stewart picked up 17 yards on one carry while Braden Revere rushed four times for 17 yards.

Tarver led the BA offense with six tackles. Stewart made 5.5 tackles and recovered a pair of fumbles. Trevor Fortenberry made five tackles and Easton Boyte had 3.5 stops for the Cougars.

Brookhaven Academy will be on R.M. “Red” Stuart Field for their home opener this week against Central Holmes Academy. Central Holmes is 0-1 after losing 18-0 to Clinton Christian Academy Friday night.