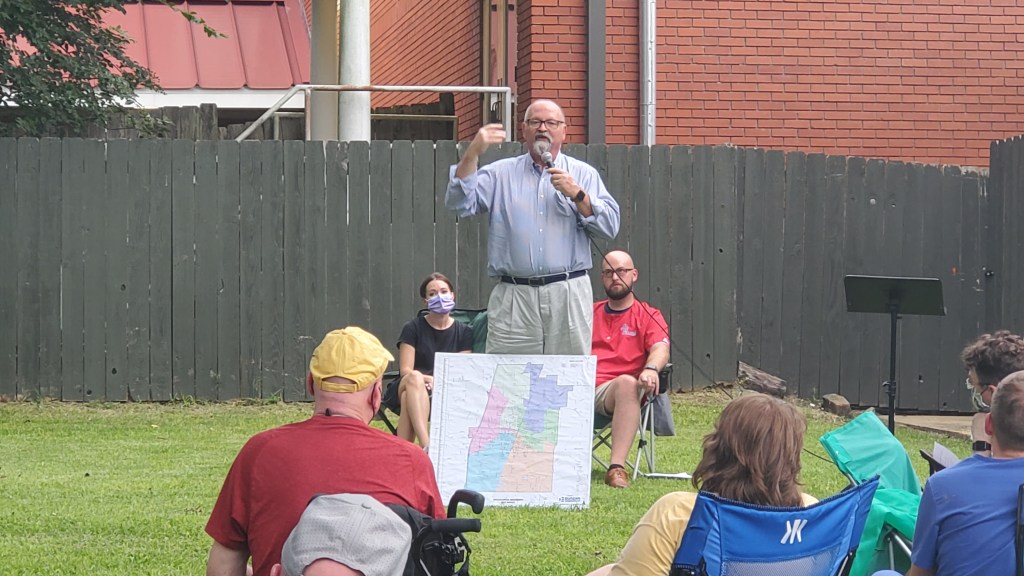 Brookhaven citizens concerned about the safety of their neighborhood met Thursday night to discuss ideas on how to be proactive against crime.

The crowd of nearly 60 that met in the courtyard of Ole Towne Church was made up of home and business owners, law enforcement, politicians and other interested parties.

The meeting came about after members of the Vernondale Neighborhood Watch Facebook page and residents of that area and Ole Towne voiced concerns over recent acts of vandalism and thefts within the neighborhoods. Attendees said they wanted more patrols from and higher pay for police officers, stricter accountability for juvenile and adult criminal offenders, and workable plans put in place to safeguard against crime and malicious mischief.

City Alderman-at-large Don Underwood, Justice Court Judge and interim City Judge Roger Martin and Youth Court Judge Brad Boerner repeatedly assured the crowd that the local legal system was doing what it could to address the issues, but that there were limits as to what could be done in various situations.

Anyone age 17 and under who breaks the law is sent to Youth Court as a minor and, if found guilty, are said to be guilty of “delinquent acts” rather than “crimes,” Boerner said. All information on minors is strictly confidential and cannot be released to the public by the courts or media, he said.

A minor who has gone to Youth Court and is then considered a “delinquent child” are then put into certain rehabilitative services with the goal of keeping that minor from persisting in delinquent acts and becoming a criminal as an adult.

The majority of young people who get involved in illegal activity are age 12 to 15, Boerner said. If they can be rehabilitated during that age, they can become productive, respected adults in the community.

The most common themes the judge said he has seen in Youth Court have been that more than 90% of offenders have no father in the home and more than 50% are either not attending school or have greater than 30 absences in an academic year. The majority of offenses are also committed during the late afternoon and evening hours, he said.

“Is there a curfew law for minors and, if so, is it enforced?” one attendee asked.

“To my knowledge there is not,” Boerner replied. “Youth Court kids always get a curfew, however. The problem is enforcing it.”

Penalties increase for delinquent children who are caught out after curfew, especially if they are involved in more illegal activity, but the reality is there is a limited ability to govern the curfew, he said.

Again and again, resolving issues presented by attendees were answered by Boerner and others as matters of inadequate resources, human and monetary.

The group addressed making voluntary patrols throughout their neighborhoods, taking a more active role in observing and reporting illegal or suspicious activity; installing quality, monitored camera systems; using text alerts to keep others informed; and possibly forming a 501(c)3 non-profit in order to help fund whatever the group decides to do.

Judge Martin proposed lobbying the state Legislature and U.S. Congress to provide backing for a juvenile detention facility to be built and staffed locally. The facility could then be used as a greater incentive against committing delinquent acts as a minor, as well as create jobs and boost the local economy, he said.

“Crime doesn’t have a color,” he said. “There are no consequences (for offenders). We have been looking at the problem for years. There have been seven or eight negroes killed over there on the east side of town, and these crimes are just now affecting you. You’re seeing it. I’m grateful you all are doing something to make a difference. I wish we would do something.”

“This is for the city, not just Ward 4 or Vernondale, said local businessman Will Thibodeaux. “If one ‘side’ is bad, it’s all bad. What can we do and who do we need to sit down with to do something?”

“I know aldermen Don Underwood and Jeff Henning are here, but I think we need to pile up in (City) Board meetings and pressure them to make changes,” Cain said.

“We need to take hold of our town now,” Thibodeaux said. “Because in 20 to 25 years, when I-14 comes, we’re going to see mass, quick growth, and what will our city look like then? We need to do something now.”

Underwood reiterated that the city, county and state would not be able to fund a detention center or anything else the residents wanted to get done — they would need to make their voices heard at the national level.

“Do you realize the advantage you have? You have a U. S. Senator who lives here,” Underwood said. “Out of 100, you have one. You’ve got to be ready to do it.”