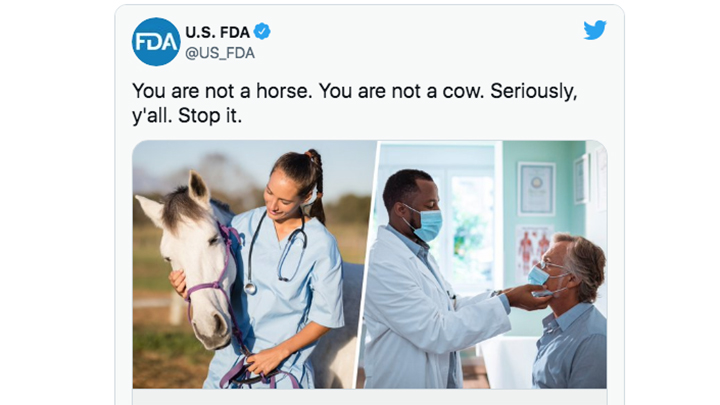 As the delta variant of COVID-19 has turned Mississippi into the global hotspot for new cases — the most cases per capita in the world and the lowest vaccination rate — some people have turned to taking livestock de-wormer to try to prevent or treat COVID-19.

Over the weekend, the Food and Drug Administration tweeted, “You are not a horse. You are not a cow. Seriously, y’all. Stop it.” The FDA also posted links to two articles — “Why you should not use ivermectin to treat or prevent COVID-19” and “FAQ: COVID-19 and ivermectin intended for animals.”

MSDH stressed Monday that no medication intended for animals should be taken by humans. Livestock ivermectin is highly concentrated, is toxic to humans and can cause serious harm.

Safe and effective medications to prevent or treat COVID-19 are available through vaccines or monoclonal antibody infusions.

Full approval was given by the FDA to Pfizer’s vaccine Monday morning. More than 200 million Pfizer doses have been administered in the United States and hundreds of millions more worldwide. Moderna has applied for full approval. Johnson & Johnson said it hopes to do so later this year.

“Vaccines are one of our greatest weapons against the virus,” said acting FDA Commissioner Janet Woodcock. “We hope this approval will bolster confidence in those who’ve been wavering.”

MSDH also reported 7,249 new positive COVID-19 test results over the weekend, an average of 2,416 per day, and 56 deaths. Lincoln County now has reported 121 deaths and 4,613 cases of the virus — 42 more positive results over the previous three days.

The FDA has approved some forms of ivermectin for human use. It is used to treat intestinal strongyloidiasis and onchocerciasis, both caused by parasitic worms. Topical ivermectin has also been approved to treat external parasites such as head lice and skin conditions like rosacea. These medicines are different from livestock ivermectin.

Ivermectin approved for human use is not without its own risks. It can interfere with blood thinners and other medications, according to the FDA. Taking too much ivermectin can cause nausea, vomiting, diarrhea, low blood pressure, itching, hives, dizziness, balance problems, seizures, coma and death.

Misinformation on social media is driving people to purchase Ivermectin from their local feed stores or livestock supply businesses.

“When these things become viral, a lot of people will jump on them,” said Dr. David Vearrier, a toxicologist and professor of emergency medicine at the University of Mississippi Medical Center, who works with the Mississippi Poison Control Center.

“Folks are believing that it’s somehow possible that this medication will either reduce transmission, or reduce the degree of symptoms of COVID-19, none of which is correct,” he said.

The FDA confirmed that initial research is being conducted on the efficacy of ivermectin as a treatment for COVID-19, but nothing has been reviewed or approved at this time.

“Taking a drug for unapproved use can be very dangerous. This is true of ivermectin, too,” the FDA said in a consumer update. “There’s a lot of misinformation around, and you may have heard that it’s okay to take large doses of ivermectin. That is wrong.”