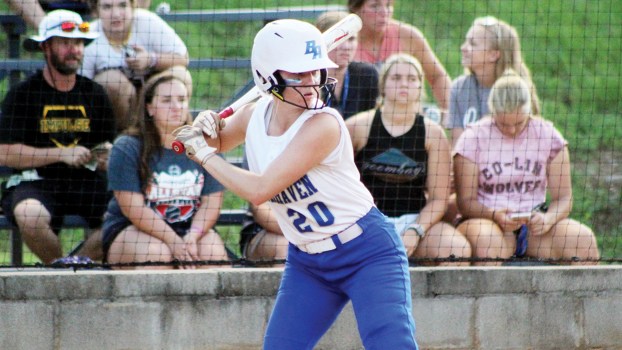 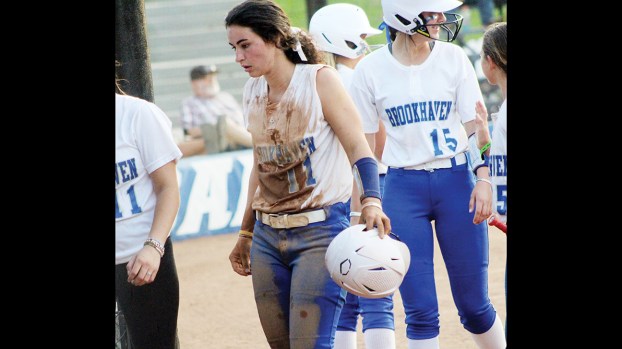 Photo by Cliff Furr Senior Abby Grace Richardson heads to the Brookhaven Academy dugout after sliding headfirst into home plate. Richardson hit her seventh home run of the year in the BA win over Wayne Academy.

Her reputation has preceded her as she’s drawn a team high 20 walks this season for the Lady Cougars.

“I probably see one really good pitch most games,” said Richardson. “If I don’t make the most of it then I’ll get so mad at myself.”

Monday Richardson turned on a ball across the plate and smashed it down the left field line for her seventh home run of the season in a 9-4 BA win over the visitors from Wayne Academy.

“I’d just let a fast ball come right down the middle and I wasn’t sure if I’d see another pitch like that again,” said Richardson.

Over 50% of her hits this season have been long balls as she has 13 hits through 16 games for coach Becky Flowers.

Her home run Monday was a two-run shot that put BA up 9-0 in the bottom of fifth.

Wayne Academy came back to score their four runs in the top of the sixth.

With one on and one away, Richardson caught a liner at short stop and then doubled off a WA runner on first to end the inning and any threat of the Wayne comeback progressing.

Only two of the runs given up by freshman pitcher Kensy Covington were earned. She threw 80 pitches and gave up seven hits. She struck out 11 and walked none.

“I’m so proud of Kensy and the way she pitched tonight,” said Flowers. “When we scheduled this game with a big district matchup against Silliman on Tuesday, I knew that this was going to be one that we’d try to get Kensy a complete game in. She delivered all night and when things tightened up, she calmed down and trusted herself and her defense.”

Emme Barrett led BA with two hits while Madison Moak, Bailey Parks and Emily Claire Felder had one hit each. Felder and Parks both hit a double apiece.

BA led 1-0 after the first when Moak scored on a sac fly by Bailee Goodson.

Goodson was the next batter and hit a ball to left that was handled for an error by Wayne Academy. Lambert scored from third, Moak from second and Richardson never checked up as she scored from first.

Her headfirst slide into home left no doubt that she was safe as her home white jersey quickly went brown with dirt from her efforts. BA led 6-0 and the game was basically over from there.

Goodson scored later in the frame on Parks’ double.

The Lady Cougars pack a ton of games into the month of August as they usually play a tournament every weekend that has them playing three games on most Saturdays.

They still have their traditional tournament that they’ll host on Sept. 11 and a tournament put on by Jackson Prep on Sept. 18. The postseason begins on Sept. 25 with the MAIS 5A South State Tournament.

Co-Lin is hosting an MAIS Round Robin Tournament on Saturday that the Lady Cougars will participate in.

Flowers and her crew will play the final two games of the day beginning at 2:30 p.m. with a matchup against Oak Forest and then at 4 p.m. when they take on Clinton Christian.

Richardson says the key to getting through a two or three game Saturday is having very little short-term memory.

“You can’t beat yourself up over a bad at-bat early on, because if you do it’ll affect the rest of your day,” said Richardson.

After a talk from Flowers and assistant coach Lisa Covington, the team gathered in a circle for a prayer after the win against Wayne Academy.

Richardson credits the closeness of the team this season with a renewed focus on maintaining strong faith.

“I think that us keeping Jesus Christ in the forefront of everything we do, that’s the reason we’re having the season we are so far,” said Richardson. “We just want to give Him the glory and keep playing together through the rest of this year.”

Aside from their tournament next month at the Hansel King Sports Complex, fans won’t have many more chances to see the senior group of Richardson, Moak, Goodson, Felder and Riley Ruffin play at home over the coming weeks.