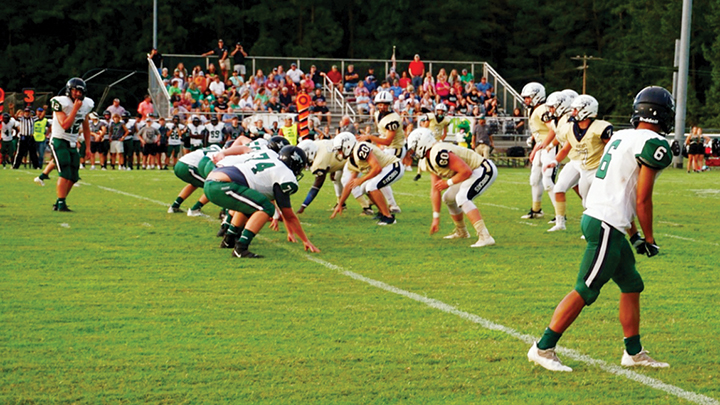 Photo by Zachary Ard The Bogue Chitto defense gets set Friday night to stop a Pisgah running play on Troy Smith Field. The Bobcats whipped the visiting Dragons from Rankin County 42-20 in the season opener for both teams.

It was never close Friday night on Troy Smith Field at Bogue Chitto.

Visiting Pisgah went up 7-0 in the first quarter but would then see the homestanding Bobcats score four times in the first half to take a win going away by a 42-20 final score.

Junior Cameron Williams scored twice on the ground for head coach Gareth Sartin. His 41-yard TD run in the first quarter tied the game and in the fourth he added a 53-yard TD run.

Junior QB Colton Frith added three rushing touchdowns of his own as Pisgah failed to do much defensively with the Bobcat ground game.

In the second quarter Frith had a 56-yard run that made it a 21-7 lead for his team.

Senior running back Hunter Goebel also got in on the big plays as he scored from 32-yards out late in the second quarter.

Bogue Chitto is back at home Friday as they’ll host the Mt. Olive Pirates at 7 p.m.