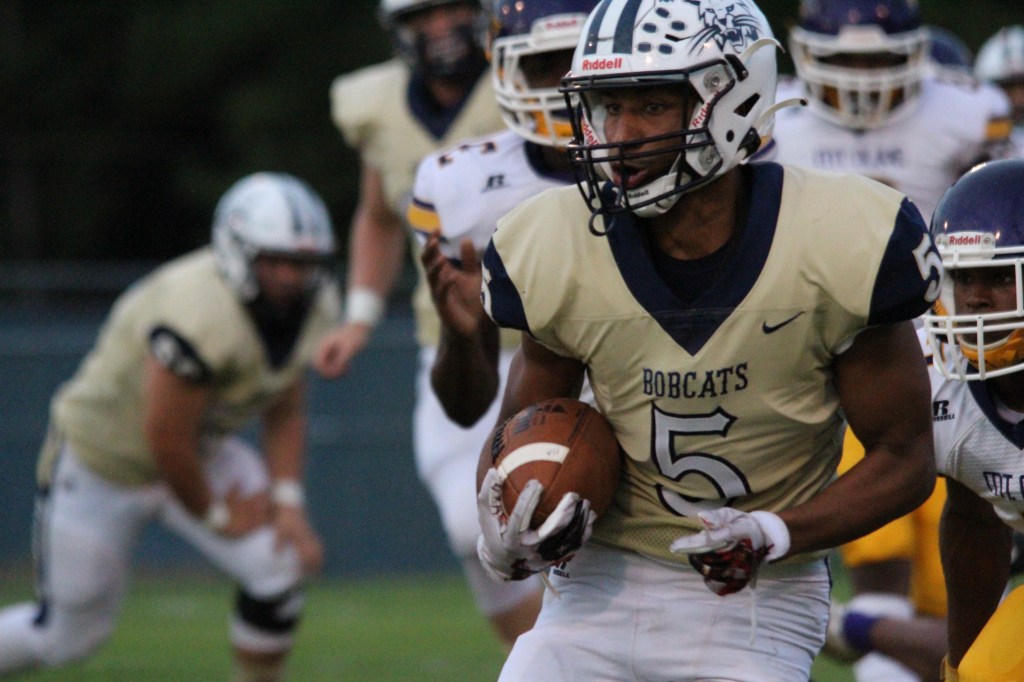 When Bogue Chitto met at the ballcarrier like a pack of Bobcats Friday night on Troy Smith Field, good things happened.

However, when that didn’t happen, it often ended with a Mount Olive Pirate breaking free for a big play. The latter occurred too many time Friday as visiting Mount Olive rode explosive plays to a 34-23 win over the BC Bobcats and coach Gareth Sartin.

Before ever running on the field, you could see a bigger, better looking group of Pirates on the Mount Olive sideline. Bogue Chitto owned a 2-game winning streak in the series and both teams were coming off large wins last week.

Seniors Quandarius Hubbard, Austin Haynes and Marcus Baggett along with junior John Stephens gave Mount Olive plenty of options at their skill positions in the run-game.

Hubbard got in from 3-yards out and then Haynes added a 2-point conversion dive to put Mount Olive up 7-0 early in the first quarter.

On the ensuing kickoff junior Cameron Williams returned the kick 65-yards for a score. Carson Price booted the PAT-kick and Mount O led 8-7.

The Pirates were big up front, often running behind 6-foot-6, 354-pound offensive lineman Zyrus Craft. Craft is a senior who holds offers from Mississippi State and South Alabama among others.

A 7-yard scoring run by junior Turner Thompson put BC ahead 14-8 with 1:17 remaining in the first quarter.

A big catch by Hunter Goebel earlier on the drive set up the score as a long tackle for a loss by Deacon Wallace on the preceding defensive stand helped force the Mount Olive punt.

On the very next play after the go-ahead touchdown for Bogue Chitto, the Pirates responded with a 75-yard run by Haynes. The 2-point try failed and the game remained 14-14 all the way through halftime.

Linebacker Ken May went out with an injury in the first half that affected the BC defensive depth. Williams would also miss time in the first half icing an arm as both teams had large jugs of pickle juice being consumed on the humid sidelines in order to battle cramps.

A 22-yard field goal by Price made it 17-14 early in the third quarter, but you could tell Bogue Chitto had missed an opportunity to go ahead a full score after taking over deep in Mount Olive territory on a fumble recovery inside the 10-yard line.

A 72-yard touchdown run by Hubbard put Mount Olive back on top with 2:56 remaining in the third quarter.

The run was a good example of how hard it was for a lone Bobcat to take him down. Two Bogue Chitto players ran in to grab Hubbard’s jersey and ended up colliding. Hubbard kept his feet and was pushed ahead by their momentum as no one from the home team could run him down from behind.

The Bobcats finally got the big play they’d been looking for with 7:10 remaining in the game. Junior quarterback Colton Frith rolled right, ducked a defender and found a wide-open Williams streaking across the backside of the Mount Olive defense.

Williams outran everyone for an 80-yard score. The 2-point try failed and Bogue Chitto led 23-22.

The celebration didn’t last long though as Hubbard and Mount Olive returned the kickoff for a score that put them ahead for good. The Pirates tacked on another TD late to pad their lead.

Price had been kicking the ball to where Mount Olive wasn’t on kickoffs all night — high and short — and Bogue Chitto nearly recovered the ball twice.

The kick to Hubbard was one of the longest of the night, but Hubbard quickly broke through the first line of the coverage team and went untouched to the endzone.

Bogue Chitto (1-1) makes the short drive to Enterprise next week to take on the Yellow Jackets (1-0).