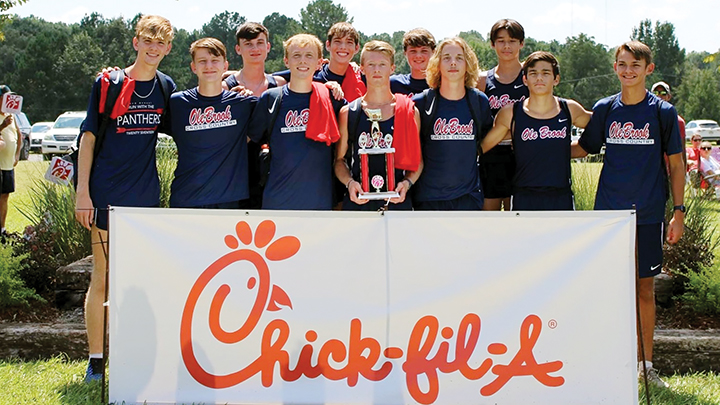 Photo submitted Members of the Brookhaven High boys cross-country team pose with their trophy featuring a cow atop it after winning The Opening sponsored by Chick-fil-A and hosted by Mississippi College on Choctaw Trails.

The Opener hosted by Mississippi College at Choctaw Trails is one of the biggest cross-country events of the season as over 1,000 runners from public and private schools across the state and from out of state schools competed in 5K varsity, 4K junior varsity and 3K junior high races Saturday.

Thirty teams competed in the Boys 5K Red Race and none were faster than the Brookhaven High Panthers.

The senior duo of Grayson Childress and Sam Arnold took first and second overall respectively in a field that was made up of 257 runners. Pearl High finished second and Parkway High out of Shreveport was the third-place team.

Childress ran the 3.1-mile course in 16 minutes and two seconds while Arnold finished at 16:06.