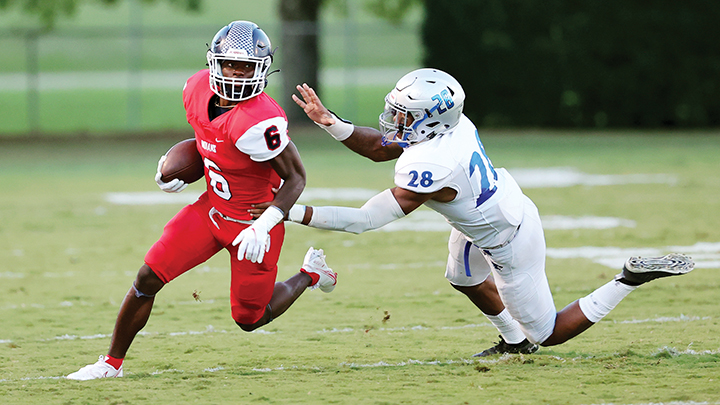 The hope is that the Copiah-Lincoln Wolves can put what turned out to be a brutal two-game opening stretch of the season behind them and put their focus on next week’s MACC division opener against their rivals from Southwest Mississippi CC.

Thursday in Fulton against Itawamba, the Wolves moved to 0-2 on the season after a 30-3 loss to the Indians. Last week Co-Lin lost 31-12 in their opener at Northwest.

Offense was hard to come by for CLCC Thursday as they passed for just 95 yards on the night and rushed for 128 more on the ground. Itawamba posted 372 yards of total offense to pull their record to 1-1 after an opening week defeat at Southwest Mississippi CC.

ICC led 7-0 at halftime and the opening Co-Lin drive of the third quarter netted the only points of the night for the Wolves, a 24-yard field goal by sophomore kicker Bryce Lofton (Pisgah HS).

Co-Lin had a fumble that gave Itawamba a short drive and resulted in a field goal. They also gave up a touchdown on an interception return in the fourth quarter.

One bright spot was the running of sophomore Drexlan Allen (Hattiesburg High) for Co-Lin. He picked up 107 yards on 11 carries.

Freshman receiver Chris Freeman of West Lincoln made his first career reception in the game and finished with two catches for 18 yards.

ICC had two drives in the game that went over 80-yards each and resulted in touchdowns. They won the time of possession battle 33:56-26:04.

Thursday in Summit, the Southwest Bears hosted East Mississippi. EMCC is back playing football after taking last season off due to COVID-19. It was the second straight home game for SMCC as they beat Itawamba last week in Summit.

A 7-7 game early on, EMCC (2-0) was too much for Southwest (1-1) to handle in a 49-7 loss. First year SMCC head coach Cliff Collins is a former, long-time East Mississippi assistant coach.

Kickoff between Southwest and Co-Lin is scheduled for 6:30 p.m. in H.L. “Hook” Stone Stadium Thursday.