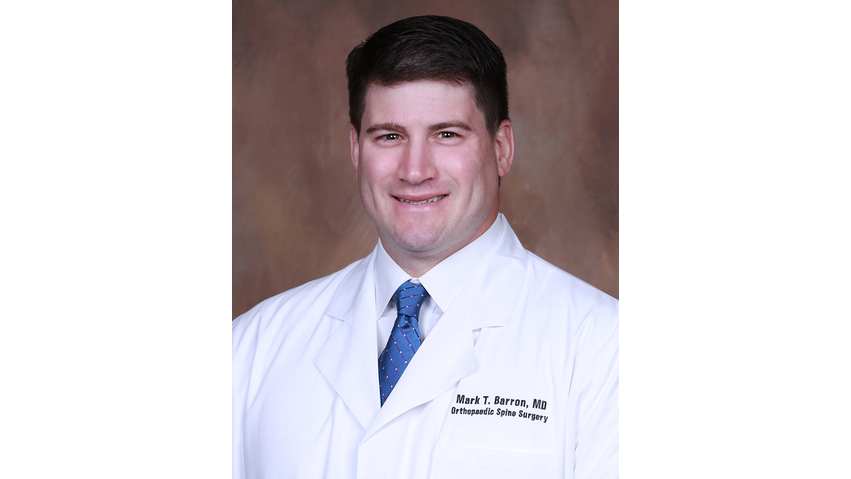 Dr. Mark Barron of Brookhaven has been inducted into the Jones College Sports Hall of Fame.

Barron and former tennis and soccer coach Mark Easley were inducted in a ceremony Thursday during halftime at the Jones vs. Northwest Mississippi football game.

Barron played football and baseball and was a member of the 2001 MACJC championship football team.

There are now 54 members in the Jones College Sports Hall of Fame.

Barron is a 1999 graduate of West Jones High School.

While at West Jones, he was a letterman in three sports – basketball, baseball and football. He was a member of numerous academic clubs, earning All-District honors in football and was voted “Most Athletic” his senior year. He helped lead his team to the playoffs twice in football, twice in baseball and once in basketball during his high school career. He graduated fifth in his class at West Jones

While at Jones, he absorbed a knee injury which caused him to miss his freshman year of football. In the spring of 2000, he would pitch for the Jones baseball team.

He would later play two additional years on the football team as an offensive tackle helping lead the Bobcats to the MACJC championship in 2001. He also participated in the MACJC North-South All-Star game in 2001. He received the Bobcat Award for football after the 2001 season.

Upon leaving Jones, he went to Delta State University to continue his football career. During his senior season at Delta State, he helped lead the team to a 9-2 record as well as earning All-American honors.

He graduated from orthopedic residency in 2013 and then went on to complete a spine surgery fellowship at the University of Missouri in 2014. Upon completion of his training he returned to Mississippi where he started a practice in orthopedic/spinal surgery in Brookhaven.

Barron is now a board-certified orthopedic surgeon in his seventh year of practice. He is affiliated with King’s Daughters Medical Center in Brookhaven.

Helping him along the way are his parents, Fred and Neita Barron, his fiancé Laura Ashley Logan, sister Terri Furr, and brother Christopher Barron.