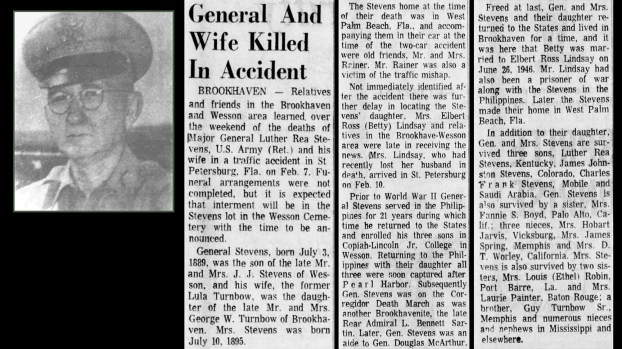 Photos submitted / U.S. Army Brigadier General Luther R. Stevens, and a newspaper article about the 1973 wreck that claimed both his life and that of his wife. 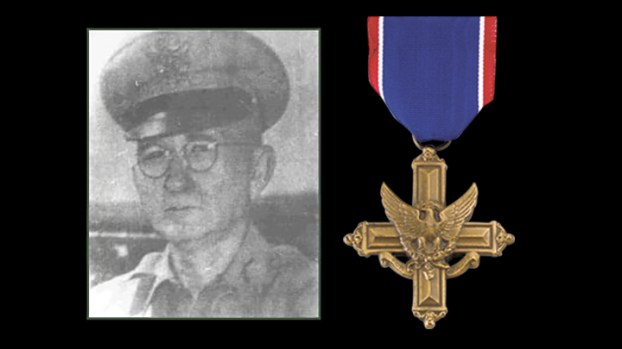 A ceremony to honor a pair of prisoners of war will take place Friday in Wesson.

The 10 a.m. ceremony at the American Legion Post 79 — 1014 Main St., Wesson — will be conducted by Veterans of Foreign Wars Post 2618 of Brookhaven, and will honor Army Brigadier Gen. Luther Rae Stevens and his wife Lula Turnbow Stevens.

As a colonel, Stevens was part of the Bataan Death March, the Japanese Army’s forcible transfer of 60,000-80,000 American and Filipino prisoners of war from Bataan to Camp O’Donnell, a distance of 85 miles in six days of April 1942, with only a single meal of rice during the journey. Approximately 1,000 Americans and 9,000 Filipinos died during the march.

In 1947, Gen. Stevens was awarded the Distinguished Service Cross “for extraordinary heroism in connection with military operations against an armed enemy while commanding the 91st Division (Philippine Scouts), in action against enemy forces on 29 December 1941 at Gapan, Luzon, Philippine Islands. In a strong surprise move against the town, the enemy sent a heavy concentration of fire at close range against the defenders. Realizing the grave situation, and in the face of heavy enemy small-arms fire, Colonel Stevens moved calmly along the newly established line, encouraged the men to hold, to take careful aim, and to fire with greater effort. Colonel Steven’s vigorous leadership and courage were a source of inspiration to the men and served to stabilize the vital defense line. Colonel Stevens’ intrepid actions, personal bravery and zealous devotion to duty exemplify the highest traditions of the military forces of the United States and reflect great credit upon himself, his unit, and the United States Army” (valor.militarytimes.com).

A reception will follow the ceremony at the American Legion.