Upset over vaccine mandate, Gov. Reeves says he will sue 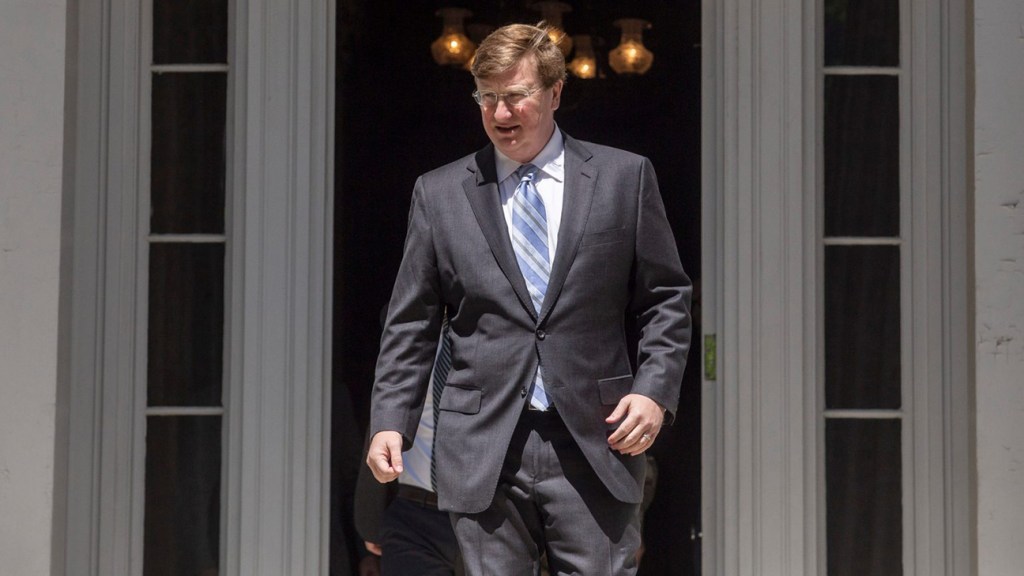 Gov. Tate Reeves walks out of the Governor's Mansion in Jackson, Miss., Thursday, March 26, 2020, as he prepares to speak to media about the coronavirus during a press conference. Credit: Eric J. Shelton/Mississippi Today, Report For America

Gov. Tate Reeves said he intends to be among a group of Republican governors suing President Joe Biden to block the president’s effort to require certain businesses to mandate their employees be vaccinated for COVID-19 or tested weekly.

“We are going to use every tool at our disposal, litigation, which I am not a big fan of ordinarily, but litigation, et cetera,” Reeves said late Friday during a hastily called news briefing on the lawn of the Governor’s Mansion.

Biden announced on Thursday a plan to try to increase the rate of COVID-19 vaccinations in the nation that included:

The governor, who in the past has said he opposes vaccination mandates even though Mississippi has multiple such requirements for school children and college students, refined his answer Friday afternoon. He said those state requirements were approved by the Mississippi Legislature, not just by one person.

Reeves said Biden’s actions were those of a “tyrant.”

“Every tyrant in history has said what they are trying to do is in the best interest of the people,” Reeves, the first-term governor, said. “Where does it stop? What does the president of the United States not have the ability to do? What else can he unilaterally force you to do? … This is not called a representative form of government, that’s not called a true democracy. That is tyranny.”

Reeves, a constant defender of former President Donald Trump, would not answer when asked if it was more tyrannical to try to mandate someone take a vaccine or try to overthrow an election as Trump tried to do.

“That seems to be a false choice,” Reeves said. “I haven’t tried to do either one of them so I really can’t comment on it.”

Reeves said Biden had in the past said he would not try to impose a vaccination mandate and accused the president of breaking his promise. He also said the president announced the plan to divert attention from the United States’ withdrawal from Afghanistan, which Reeves called an “absolute disaster.”

The governor said a lawsuit could not be filed until the president actually issues the executive order.

“I anticipate we will see a large number of states, and quite frankly all states should be involved in this litigation,” Reeves said. He added, “We can’t sue until there is actually an order. At this point we don’t know even what the order will say … We don’t know when it will be enacted, or when it is going to end if ever.”

The Biden administration has said OSHA will use emergency powers it has been granted by Congress to initiate work force safety changes to ensure the protection of workers.

Some Republican governors have tried to block school districts or other entities from imposing mask mandates or in some instances vaccination mandates.

In Mississippi, Reeves has refused to impose any mandates during the recent coronavirus surge, but has not tried to block school and local governments from doing so.