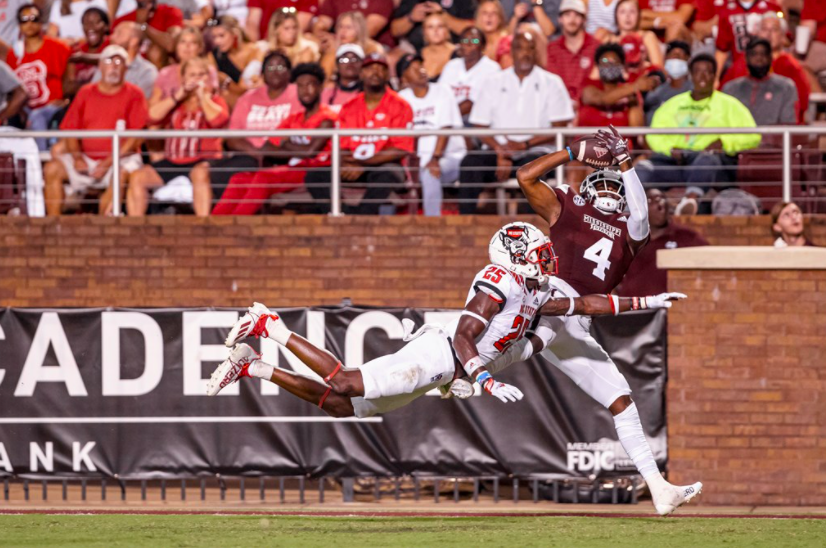 Photo by Austin Perryman/MSU Athletics Former Co-Lin wide receiver Malik Heath pulls in a touchdown pass last week against North Carolina State. The Bulldogs are on the road Saturday at the University of Memphis.

Here’s a look at upcoming college football games for teams throughout the state.

The No. 17 Ole Miss Rebels will look to move their record to 3-0 when they take on Tulane Saturday in Oxford. The game will be televised on ESPN2.

Last week the team routed Austin Peay 54-17 behind five touchdown passes from quarterback Matt Corral. The Ole Miss defense was strong again after a great showing in the opener against Louisville.

The level of competition gets cranked up this week though as the Tulane Green Wave come to town. Tulane gave Oklahoma all they could handle in their opener — a 40-35 win for the Sooners.

The Rebels have won 11 in a row over Tulane in a series that dates back to 1893. Ole Miss will be off next week before traveling to Alabama on Oct. 2.

Mississippi State at University of Memphis

Lideatrick Griffin returned the opening kickoff 100-yards for a score Saturday in Starkville and Mississippi State kept that momentum rolling all day in a 24-10 win over North Carolina State.

The MSU defense was a problem all afternoon for the Wolfpack as Emmanuel Forbes finished with 11 tackles for the Bulldogs. Offensively, coach Mike Leach’s Air Raid offense featured a 21-yard TD catch from former Co-Lin standout Malik Heath as nine different Bulldogs caught a pass in the game.

The game will be televised on ESPN2.

Memphis is 2-0 after outlasting Arkansas State 55-50 last week. The Tigers and Bulldogs have not played since 2011 and MSU has won 12 in a row in the series. Mississippi State will host LSU next week.

First year Southern Miss football coach Will Hall said before the Grambling State game last week that his “life was on the line” and that he felt like the “biggest fraud” to come through Hattiesburg in the last 50 years.

Hall was obviously upset with how his team played in an opening loss at South Alabama, but he lives to coach another day after Frank Gore Jr. rushed for a career high 162 yards in a 37-0 win over the Tigers from the SWAC.

Troy also has a win over a SWAC opponent as they blew out Southern University in their opener before losing a close game last week to Liberty. The Trojans are coached by former USM offensive coordinator Chip Lindsey.

The game will be televised on ESPN+.

Southern Miss beat Troy 47-42 in Alabama when the teams last played in 2019. The Golden Eagles will play at the University of Alabama next week.

Alcorn dropped their opener against North Carolina Central in Atlanta 23-14, but bounced back nicely last week to beat Northwestern State 13-10 in Lorman.

Game prep for this week’s trip to face South Alabama has drawn national attention, though for the wrong type of reasons. Coach Fred McNair cancelled practices Monday and Tuesday for the team due to a lack of available athletic trainers.

Staffing issues and the unavailability of certified trainers was one of the reasons the Braves chose not to play in the SWAC Spring Season earlier this year.

The South Alabama game will be broadcast on ESPN3 and next week Alcorn plays on ESPNU in a Thursday night SWAC opener at Arkansas-Pine Bluff.

The JSU faithful are riding high after beating Florida A&M 7-6 in the season opener and Tennessee State 38-16 last week in the Southern Heritage Classic.

Deion Sanders played for the legendary Bobby Bowden during his college career at Florida State. Louisiana-Monroe is coached by Bowden’s son Terry and there are plans to honor Bobby Bowden — who passed away on Aug. 8 at the age of 91 — prior to the game.

Jackson State will make their home debut next week when they host Delta State.

Stephen F. Austin will be a tough opponent as the Lumberjacks lost 28-22 last week at Texas Tech University.

Delta State is 2-0 on the season after two blowouts wins at home. The Statesmen opened the year with a 48-14 win over Bethel University — an NAIA program out of McKenzie, Tennessee.

Competition steps up this week with the start of Gulf South Conference play. West Georgia is also 2-0 with big wins over Carson-Newman and Morehouse College.

The Choctaws don’t start Gulf South Conference play until next week. MC lost 24-0 to Albany State in Clinton back on Sept. 2.

The University of Fort Lauderdale is a small commuter school — enrollment in the hundreds — that’s playing their first year of college football after previously having a club-team at the school.

The Blazers are making the long trek to Abilene to take on a no. 6 ranked Hardin-Simmons team. Belhaven beat Millsaps College 56-28 in their opener before losing 34-27 last week to Southwestern University.

The Blazers play in the NCAA Division III classification and are members of the American Southwest Conference. Belhaven is the only school in the conference this season that isn’t located in Texas.

Millsaps is back on the field after being off since their loss to Belhaven on Sept. 2. Millsaps will be back at home next week when they host Olivet College.