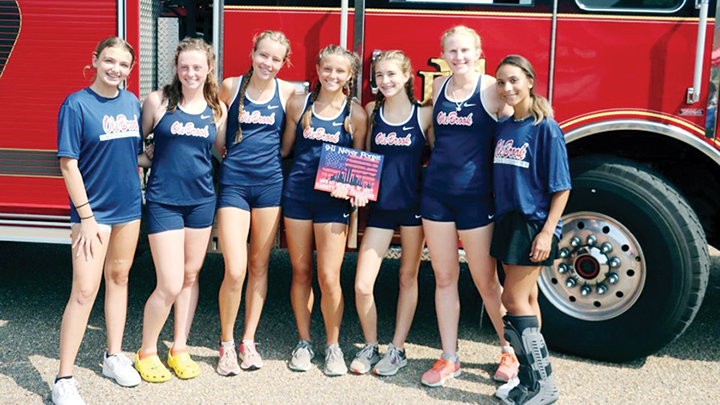 Photo by Terri Mabile The Brookhaven High girls’ varsity cross-country team pose with their trophy after winning the Northwest Rankin 9/11 Memorial Meet on Saturday. Both BHS varsity teams will run this weekend at the Saltillo High Invitational outside of Tupelo.

The course was lined with waving American flags Saturday in Flowood as Northwest Rankin High School hosted a 9/11 Memorial Cross-Country Meet on their campus.

The Brookhaven High boys team made it three for three in first place finishes this season with another win and the Ole Brook girls’ team also claimed the top spot in their team competition as well.

The junior varsity will run again this upcoming Saturday at Northwest Rankin while coach Shannon Knott will take the BHS varsity team to Lee County for the Saltillo High Invitational.

Saltillo High is the primary 5A competition year in and year out for the Panthers and last year 19 teams competed in the 4A-6A 5K race at the meet.

In the varsity girls’ race, Brookhaven edged out Brandon for first place. The Ole Brook freshmen duo of Annabelle Summers and Ella Thompson were seventh and eighth place overall, respectively.

Loyd Star senior Aubrey Britt was the fifth overall finisher in the race.