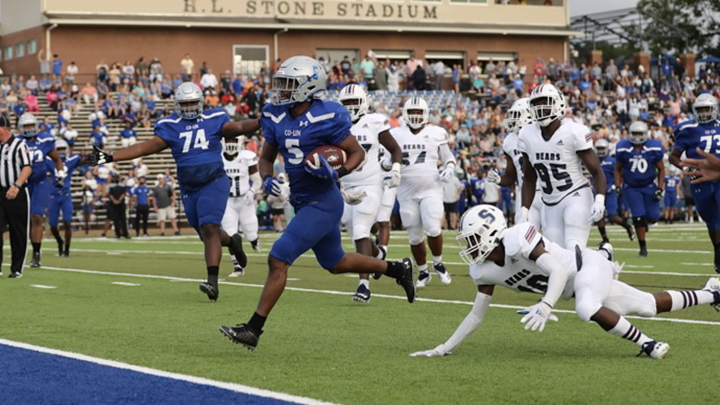 Photo by Chuck Box/CLCC Sports Info Co-Lin sophomore running back Drexlan Allen walks into the end zone Thursday in Stone Stadium. Allen rushed for a game high 89 yards on 11 caries to help put the Wolves past Southwest Mississippi CC by a 39-21 final.

Copiah-Lincoln CC made the most of opportunities all game long and in doing so, cruised to a 39-21 win over the Southwest Mississippi Community College Bears Thursday in a MACCC south division meeting.

It was the first win of the season for Co-Lin (1-2) and came in front of a large, energetic crowd inside H.L. Stone Stadium. The Wolves had played their first two games of the season on the road.

Five of Co-Lin’s scoring drives went for 50-yards or shorter as the Bears gave the Wolves a short field all night. Southwest (1-2) had five turnovers in the game.

“Generating turnovers isn’t something we did well in our first two games,” said CLCC coach Glenn Davis. “Our defense did a great job of that against Southwest and having a short field changes a lot of how you’ll call plays on a drive and how aggressive you can be.”

The opening drive of the contest saw Southwest cough the ball up via a fumble that was recovered by CLCC defensive end Demario Martin (Columbus HS).

It took just four plays for the Wolves to turn that giveaway into points as sophomore running back Drexlan Allen (Hattiesburg HS) rushed in from 17-yards to put CLCC up 6-0.

Later in the first quarter Davis saw his team put together one of their best drives of the night. It covered 84 yards and ended when running back Bobby Shanklin Jr. (Noxubee County) scored from 2-yards out.

Another 2-yard score by Shanklin Jr. and a Bryce Lofton PAT kick put Co-Lin up 19-0 with 14:18 remaining until halftime.

That TD was preceded by an interception from Co-Lin defensive back Malik Jones (Crystal Springs).

The ensuing drive had things looking like Southwest might make it a game before halftime. The Bears went 75 yards on nine plays in getting on the board.

With Southwest driving later in the quarter, Jones came up big again with his second interception of the night that set up the Wolves on their own 16-yard line.

A steady dose of Allen helped move the ball downfield for Co-Lin after the interception. With just two seconds left in the half, sophomore quarterback Paul Hargrave (Natchez HS) hooked up with receiver Tyquan Henderson (Canton HS) on a 25-yard touchdown pass.

Lofton booted the PAT to give Co-Lin a 26-7 lead at the break.

The Wolves used their ground game to salt away the win over the final 30 minutes of game action. Hargrave found Dontavious Turner (South Pike HS) for a 21-yard touchdown pass early in the third quarter that gave Co-Lin its biggest lead of the night at 33-7.

Co-Lin doubled up Southwest in time of possession as the Wolves possessed the ball for 39 minutes and 37 seconds of the game, compared to 20:23 by Southwest.

“Coming in we thought we’d have success running the ball,” said Davis. “They’re trying to build their program and when you’re doing that, finding defensive linemen can be one of the toughest spots to fill. Southwest played a lot of young guys up front and our offensive line is an experienced group.”

Allen finished with 89 yards on 11 carries for the Wolves. West Lincoln alum Chris Freeman caught two passes for 37 yards and rushed once for 14 yards in his best night as a member of the Wolf Pack.

Southwest is led by first year head coach Cliff Collins. The Wolves are 9-1 against the Bears from Summit over the last decade.

CLCC will be back on the road next week, traveling to Poplarville to face the Pearl River Wildcats while Southwest will host East Central.