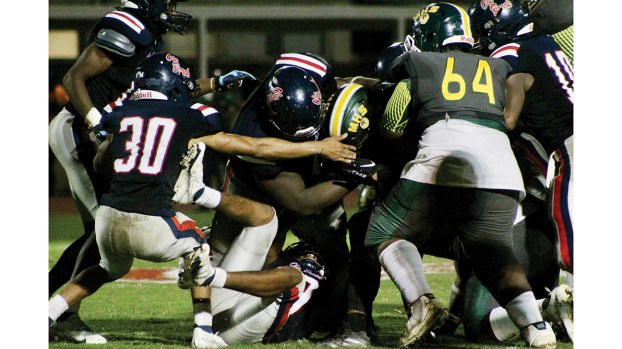 Photos by Cliff Furr Above, a crowd of Brookhaven High defenders converge on a McComb High ball carrier in the second half Friday night on King Field. 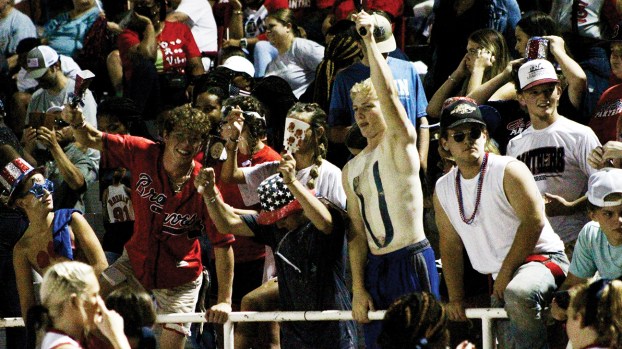 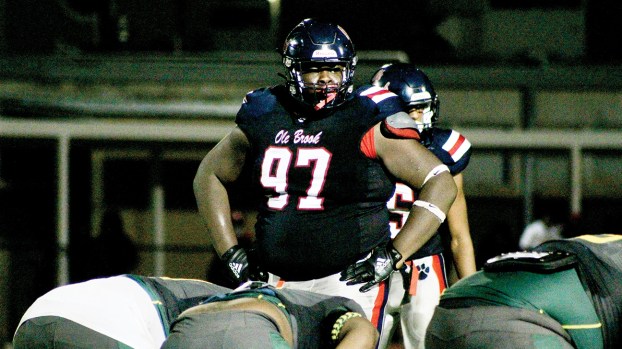 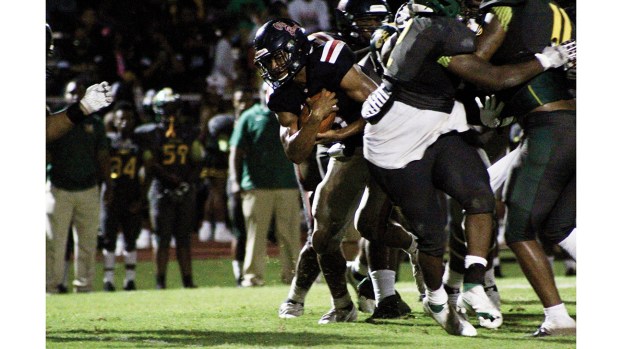 Photo by Cliff Furr Sophomore BHS running back Xavier Gayten leans forward during a run in the first half against McComb.

It was special teams and defense that kept the Brookhaven High Panthers in control of their matchup against McComb Friday for much of the night.

In the fourth quarter both teams got rolling offensively though.

Two great throws from BHS senior quarterback Dre Ross to senior wide receiver Javonta  Stewart provided the spark that Ole Brook coach Tucker Peavey was looking for as the Panthers held off the Tigers for an 18-8 win on King Field in one of the oldest rivalries in the state.

A 39-yard Bryce Smith field goal on the second play of the second quarter was the only socre of the first half as Brookhaven led 3-0 at halftime behind that kick.

The Brookhaven High defense provided a spark from the outset as they forced a turnover on the opening McComb possession.

Senior Travion Byrd came flying in and put his hat on the ball to send it flying as a fumble. Junior Malachi Williams recovered the ball, but the ensuing BHS drive was doomed by a bad snap on third down.

Later in the first quarter Byrd intercepted a pass that set up Smith’s field goal.

The play by both teams wasn’t the cleanest you’ve ever seen in the early going. It was the second game of the season for Brookhaven High after a loss last week at Tylertown and the first for McComb who had their first three weeks cancelled by various COVID-19 issues.

There were false-starts, offsides and a lack of rhythm early on. McComb also had a number of players cramping late in the game.

“We played great on defense in the first half to keep us in it when we were shooting ourselves in the foot offensively,” said Peavey. “We showed some fight at the end and that’s what you want out of your team.”

The Tigers looked like a typical McComb team though with size along both lines, linebackers that were physical in the middle and a rotation of different shifty runners to get the ball to.

“Just like always they are a big ole physical, fast team,” said Peavey. “I thought we matched up with them well though and I thought we won up front tonight.”

With 2:07 remaining in the third quarter the Tigers finally got the big play they’d been looking for.

A peak inside at the ball by a BHS corner ended with McComb scoring on a 47-yard passing play. The converted 2-point conversion made the Tigers lead 8-3.

The play of the game may have been the way BHS flipped the field on the following drive. Following a 3-and-out boy the Ole Brook offense, Smith unleashed a punt that netted 70-yards.

It took the perfect Ole Brook roll and ended up on the 5-yard line of McComb.

Coach Willie Brown’s MHS team then went 3-and-out and punted from their own endzone.

Junior Caleb Smith returned the punt to the 25-yard line for Brookhaven and momentum felt like it was shifting quickly to favor the Panthers.

Ross lofted a pass down the visitor sidelines that Stewart ran under for a 20-yard touchdown connection. On the conversion try it was the same two linking up as Ross rolled and appeared ready to run before firing a strike to Stewart.

Both of the senior leaders spent time playing both ways in the second half as defensive backs as well.

Seniors AJ Robinson and Marvis McDaniel and junior Za Marion Diggs crowded the McComb offense at the line all night as Brookhaven was strong against the run for nearly the entire game.

A big part of that was the play of senior defensive tackle Caleb Harris. The 6-foot-3, 350-pound Harris was requiring double teams from the McComb front five, leaving more Panthers to flow to the ball for defensive coordinator Corey McLaurin.

McComb came alive after the first BHS touchdown of the night though. The Tigers used a mix of passes and runs to drive the length of the field, getting down to the Ole Brook 3-yard line.

The clock rarely stopped during the drive as it looked like McComb would get a go-ahead score while leaving Ole Brook little time for a comeback.

It was hard to tell who stripped the ball and who recovered it for BHS, but with 4:06 remaining in the game and a McComb running back trying to back into the endzone, the Panther-D forced a game saving turnover.

Sophomore Jimmy Johns Jr. was one of the Panthers around the ball when it was pulled free.

Ole Brook needed just a couple first downs to ice the game, but a false start on a 3rd-and-1 moved the ball back five yards and had the green clad Tigers thinking they’d get one more chance on offense.

Ross and Stewart made sure that didn’t happen.

Ross took the snap and looked to be handing off to sophomore tailback Xavier Gayten who’d been a warrior all-night carrying the ball for Brookhaven.

Stewart never checked up as he outran a McComb defender down the middle of the field and ran under a perfectly placed pass from Ross. The play went for 82-yards and put the game away with two minutes remaining.

“I held the defender outside and I went back inside, and Dre threw the ball right into my hands,” said Stewart of the second score. “We were playing faster in practice all week and it translated to the game.”

Brookhaven High (1-1) makes the trip to Soso next week to take on the West Jones Mustangs in the opening game of Region 3-5A play. McComb is scheduled to host Moss Point next week.