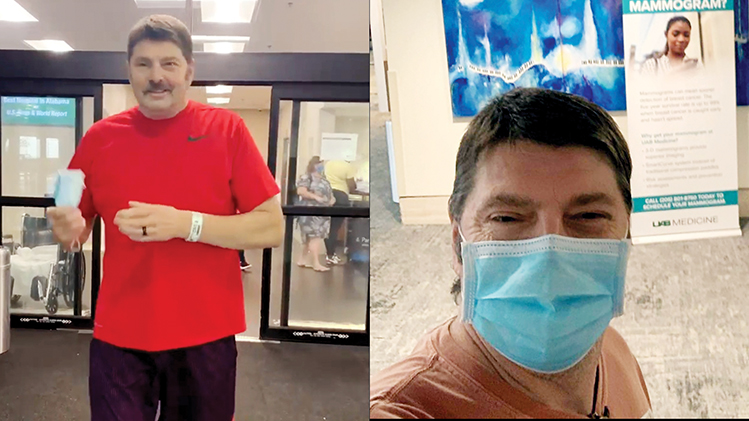 Photos submitted Above left, Barry Huff walked out of the hospital unassisted 15 days after having a double lung transplant. Above right, Huff took a selfie at his bi-weekly checkup Monday.

In 2017, Huff suffered from an esophageal hiatal hernia, where three-fourths of his stomach was in his chest cavity. One of his lungs was damaged from the hernia and the scar tissue spread to the other lung by a disease called idiopathic pulmonary fibrosis.

Huff walked into the University of Alabama Birmingham hospital with less than 20% lung function in only one lung, and on 24-hour oxygen. He had surgery on Sept. 2.

“I walked into this hospital and I’m walking back out,” he said.

He left without an IV, oxygen or any other outward indicator of what he’d been through.

Huff still has a long road to complete recovery, however. He will use a feeding tube until his body is strong enough to undergo further surgery. He will remain in Birmingham near the hospital for three months, continuing to have regular physical therapy and doctor appointments.

“There is always a risk that his body can reject the new lungs, but he is determined to do all he can to keep that from happening,” said Jessica Crowsey, Huff’s niece. “Loss of income, medical bills, plus living expenses have been bearable due to the kindness and generosity of the community. Fund raising is currently underway to help pay for his medical deductible that will restart in January, as well as all of the other expenses associated with his care.”

Huff is eager to return to the sheriff’s department as an investigator once doctors give him the “OK.” He is looking forward to being home in Lincoln County, surrounded by those who have assisted him and prayed for him during his ordeal.