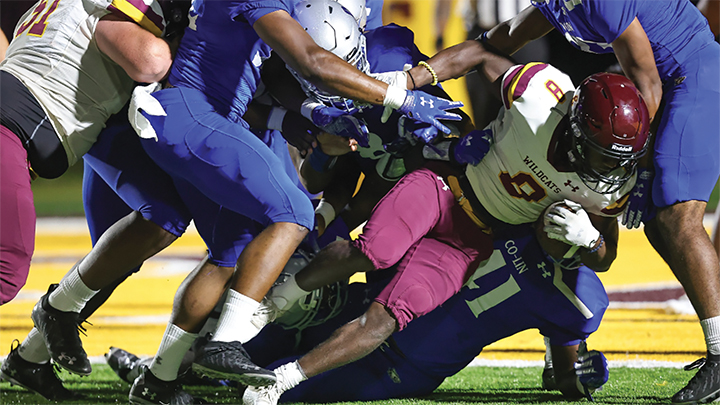 Photo by Pearl River Sports Info The Copiah-Lincoln defense swallows up a Pearl River ball-carrier Thursday in Poplarville. The Wolves will be back in Wesson on Sept. 30 hosting Mississippi Gulf Coast CC.

A close game at halftime turned into a blowout victory for the Copiah-Lincoln Wolves Thursday in Poplarville. Co-Lin (2-2, 2-0) led Pearl River (1-3, 0-2) 14-13 at halftime and dominated the final two quarters to get a 48-15 win in a MACCC South Division matchup played in Dobie Holden Stadium.

The big plays started early when CLCC sophomore running back Drexlan Allen ripped off a 75-yard touchdown run on the second play of the game.

Allen wasn’t done though, later in the first quarter the Hattiesburg High product took it to the house again, this time from 63-yards out.

Allen finished his night with five carries for 161 yards and two scores.

Pearl River is in their second season under head coach Seth Smith, who was hired by his alma mater after a successful run as the head coach at East Central High School. The Wildcats keep the ball primarily on the ground and CLCC defensive coordinator William Jones had his unit ready for it.

Jones had previously been head coach at PRCC earlier in his career.

Co-Lin averaged 7.5 yards per play through the game while Pearl River averaged just 3.8 yards per play on the night. The Wildcats only netted 31 passing yards in the game.

That TD was preceded by a turnover generated by the CLCC defense — an interception by freshman Ques McNeal defensive back (Choctaw County).

A special teams miscue by PRCC led to Co-Lin taking over on the Pearl River 9-yard line later in the quarter and running back Bobby Shanklin Jr. scored from 1-yard out to put Co-Lin up 27-13.

Like they did in their win last week against Southwest, the Wolves played on a short field for much of the night thanks to turnovers forced by the defense.

Sophomore linebacker Jalen Campbell (Winona HS) is one of the leaders of the unit and he forced a fumble in the third quarter that was recovered by his teammate Malik Jones (Crystal Springs).

That set up the next Co-Lin score, a 29-yard touchdown pass from Colton Gardner (Germantown HS) to Tyquan Henderson (Canton HS). It was the first career scoring pass for the freshman signal caller Gardner.
The final scoring play of the night for the Wolves was a 7-yard pass from Gardner to big 6-4-foot tight end Liqouri Young (Callaway HS) in the fourth quarter.

Bryce Wallace was intercepted twice on the night, both by McNeal. In the third quarter McNeal returned an interception 22-yards for a score that put the Wolves up 41-13.

Co-Lin is back in Wesson on Thursday, Sept. 30 for a 6:30 p.m. kickoff in H.L. “Hook” Stone Stadium against the Mississippi Gulf Coast Bulldogs.

Gulf Coast had a 16-game MACCC South Division win streak snapped Thursday in Raymond. The Bulldogs led Hinds CC 31-3 at one point before the Eagles came storming back to take a 42-37 win.

In other MACCC games played around the state, Jones stayed unbeaten with a 35-23 win over Itawamba, East Central held off Southwest 21-13 in Summit, East Mississippi blew out Holmes 49-7 and Northwest claimed the crown as king of the northernly directional schools with a big 45-13 win over Northeast. Coahoma will host their fiercest rival, Mississippi Delta, Saturday in Clarksdale.