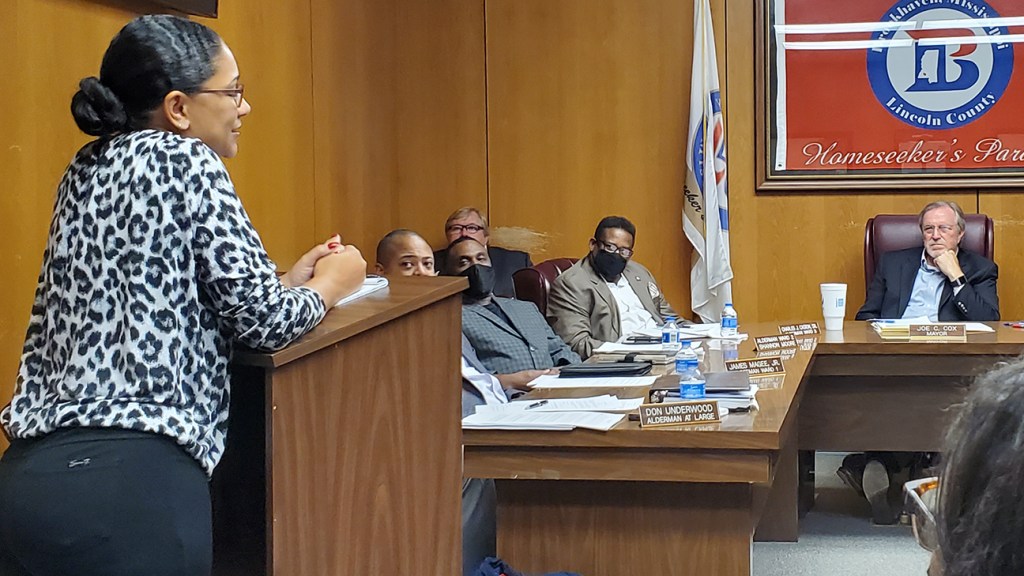 Photo by Brett Campbell Javonda Stanton of Mississippi United to End Homelessness address the Brookhaven Board of Aldermen this week.

An advocacy group is working to end homelessness in Mississippi.

Southwest Mississippi has the lowest population of homeless people in the entire state, according to Javonda Stanton of Mississippi United to End Homelessness (MUTEH). Nevertheless, the homeless are in many cities and communities, including Brookhaven.

For close to three decades, MUTEH has utilized federal grants to house the homeless, and funding is based upon homeless population size. Stanton said during her first visit to Brookhaven this week she did not see a lot of homeless people.

“We did encounter a number of transients, crossing through this community to get somewhere else,” she said. “This is just a place where they pause, not where they’re trying to stay.”

“We found one active encampment, it could have been the time of day we arrived, but they were out trying to do the same kind of things we want to do — they want to socialize; they want to find something to eat,” Stanton said. “They don’t want to sit and stare at the trees all day, so they come out … and go to the washateria, the library, the community centers … until they need to go back to what they call home.”

Because MUTEH utilizes federal funding, it operates according to the U.S. Department of Housing and Urban Development’s definition of homelessness. The definition includes people who are living in abandoned areas, under bridges, dilapidated structures, etc.; persons actively fleeing domestic violence; or victims of human trafficking.

A person who is staying at the home of a friend or family member is not homeless — they are housed, sheltered — but may have other needs, Stanton said. While MUTEH cannot use funds to help these people, they can have conversations that help them direct the person to helpful resources.

“If you think you’ve got a problem let’s offer a little bit of perspective,” Stanton told the Board of Aldermen at its regular meeting this week. “There are tent cities by the droves in some other communities.”

“There’s help – MUTEH.org. If you encounter a person who is homeless, living in a car — that’s not fit for human habitation, there’s no plumbing, no running water, no place for you to cook to feed your family in a car — they have no place to go — if you would be kind enough, a lot of them have phones, they might have a phone when they don’t have anything else (because) it binds them to the relationships they have. Direct them to MUTEH.org,” she said.

The website has boxes on its home page the person can choose from — “I am homeless and need housing;” “I am at risk of losing housing;” or “I am a homeless veteran.”

If they complete the short registration, someone will call them within 48 hours and ask, “Where did you spend the night last night?” Their answer will determine the next step a MUTEH agent takes to provide them assistance.

Sometimes they need other help first — it’s a mental health issue or an addiction issue that needs immediate attention, Stanton said, because providing housing without addressing those issues contributes to the high recidivism rate for homeless people.

“Once you’ve been there, once you’ve learned to survive, it’s easy to go back,” she said.

Though Stanton and helpers did not locate a large number of homeless people in her first visit, city leaders have given her permission to come back and perform outreach at least monthly.

“If they’re out there, we will (find them). We can’t get all that information in one day,” she said.

Housing the homeless is important because having shelter is not a privilege, Stanton said.

Homeless individuals must be sheltered first and services brought to them in order for them to succeed.

“It’s not a reward — it’s their right,” Stanton said. “But we want to connect you to services so you can be happy and housed.”

“What do you do if they don’t want to be housed?” Ward 4 Alderman Jeff Henning asked.

“That is sometimes the case,” Stanton said. “We cannot save them all.”