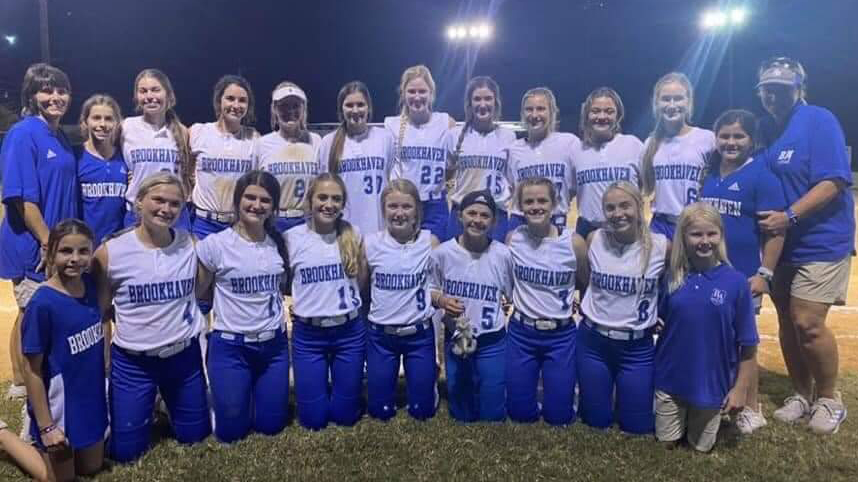 The goal Monday for the Brookhaven Academy softball team was to be a perfect 4-0 in a day of games that would stretch late into the night.

The Lady Cougars fell just short of that target, losing 14-6 to Silliman Institute in the deciding game of the MAIS 5A South State Tournament played at the Hansel King Sports Complex.

The tournament began Saturday morning with a blowout 10-0 win over Adams County Christian School for the host school.

The next game, a winner’s bracket matchup with Copiah Academy, would be the first adversity of the tournament for BA.

CA jumped up 7-0 after 2.5 innings before coach Becky Flower’s team fought back in an 8-7 loss.

“We clawed and scrapped back to make it a game,” said Flowers. “We got knocked back on our heels and were down 7-1 quickly. That type of adversity isn’t what we’ve been used to this year and I was proud of the way the girls kept battling.”

The loss put BA in the loser’s bracket of the double elimination tournament, and they kept their season alive with an 8-1 win over Columbia Academy Saturday afternoon.

When action picked back up on Monday the Lady Cougars knocked off Cathedral School 12-1, which set up a rematch with Copiah Academy.

Eight hits helped power the Lady Cougars to an 8-3 win over CA as Alayna Daigle hit a double for Flowers and Abby Grace Richardson blasted a home run as well for BA.

Senior pitcher Emily Claire Felder threw 111 pitches over seven innings to get the win. She struck out six and didn’t give up an earned run while allowing eight hits.

The win over Copiah set up a matchup in the title game with Silliman as BA needed to win twice over SI to capture the championship.

Silliman, located in Clinton, Louisiana, and Brookhaven Academy play in the same district and split their regular season matchups. BA took the district title though due to Silliman losing a game to fellow district competitor Bowling Green School.

Felder pitched the district-clinching win earlier in the week at Silliman, throwing 150 pitches over seven innings on Wednesday.

She made the start in the win over ACCS and threw 61 pitches before giving way to freshman Kensy Covington. In the first Copiah matchup, Felder threw 100 pitches over six innings while Covington tossed the final frame.

In the win over Columbia, it was 98 more pitches from Felder that earned the win for BA.

With that large volume of pitches thrown between Wednesday and Saturday, one could imagine Felder wouldn’t throw every inning for BA on Monday.

She tossed 77 pitches in the win over Cathedral then the 111 against Copiah.

With the MAIS 5A State Tournament beginning Saturday in Magee, Flowers chose to give Felder rest rather than throwing her again against Silliman.

Covington went all seven innings in 8-4 win that set up a second game between Brookhaven and Silliman, this time a winner-take-all situation.

“Kensy really went at them in our first game,” said Flowers. “She built confidence all season long and she gave us what we needed to win.”

Over seven innings in the win, Covington threw 95 pitches and gave up eight hits. She surrendered four unearned runs and walked two.

The excitement of beating Silliman gave way to the fatigue of a day spent on the field though. The game between BA and Cathedral had begun at noon and fourth and final game of the day for the Lady Cougars started around 7 p.m.

“We just ran out of gas,” said Flowers. “I could see the girls starting to really feel how tired they were as soon as we beat Silliman. I’d made up my mind that I wanted to try and save Emily Claire if possible because we’ve still got a lot to play for later this week.”

Flowers started seventh grader Madelynn Lambert in the circle in the deciding game and replaced her with Felder after Silliman scored four early runs. Felder came on but was pulled after 11 pitches as Covington finished the game in the circle for BA.

Silliman stuck with their ace Camryn Sibley throughout the night. Sibley threw 135 pitches in the loss and 131 in the game that clinched the title for the Lady Wildcats.

A temporary fence shortened the outfield dimensions to around 215-feet and balls were flying out throughout the weekend and especially late in the tournament.

Silliman hit three home runs in the finale and BA also got bombs from Madison Moak and Bailee Goodson in that game. Richardson homered for the Lady Cougars in their win over Silliman, it was her team leading 18th home run of the season.

Winning an MAIS softball state tournament is a week-long grind as the format is unlike any in the state. The eight-team tournament is a traditional double elimination affair that starts on Saturday and continues on Monday.

The championship series is held later in the week and is a best of three format with the team advancing from the loser’s bracket hosting game one at their school. Game two — and game three if necessary — is played by the team that went unbeaten over the weekend.

Brookhaven Academy (27-5-1) will begin that grind towards gold with a matchup against Magnolia Heights Academy in Magee at the Jimmy Clyde Sportsplex. First pitch on Saturday is set for noon. Win or lose, the Lady Cougars will play again at 4 p.m. on Saturday.