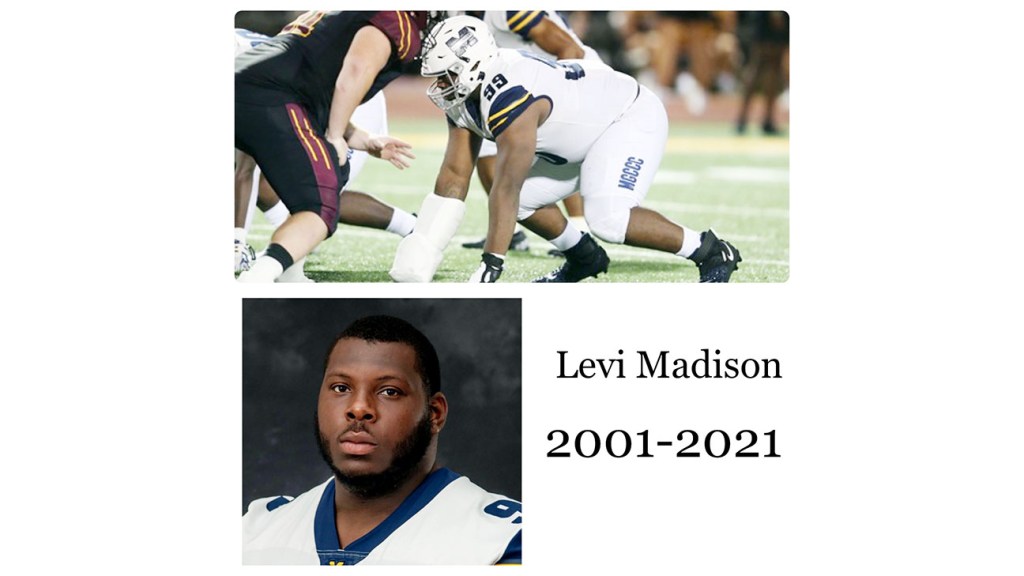 It hurt if you were a Co-Lin fan sitting in the stands or a cheerleader down on the track or a player on the field and sideline.

It hurt if you were a student cheering up front or an alum standing in the back or if you were a member of the Blue Wave band holding a horn while hollering.

It hurt so bad that you could look to your right or left and see in the eyes of everyone around you just how miserable you collectively felt even if they were a perfect stranger.

The PAT kick was the final line of a story that read Gulf Coast 14, Co-Lin 13.

13-7 has to be one of the worst leads in all of sports though — it’s a score that puts dread into the team that sits just shy of 14 points.

That rarely ever happens, no matter how bad the fans want it or how hard the players try to make it happen.

Sophomore quarterback Paul Hargrave perfectly placed a ball over the head of a MGCCC defensive back from 33-yards out and Johnson went down low to pull the ball in as he hit on his knees and then rolled through the back of the endzone.

Johnson popped up to show the official he’d maintained possession on a play that put Co-Lin up 10-0.

Gulf Coast started the second half with a look of renewed purpose. Short hooked up with receiver Jalen Bracey on a 60-yard touchdown pass that saw Bracey get loose behind the CLCC defensive backfield and have time to wait for a slightly underthrown ball.

When the Wolf Pack defense turned away a 4th-and-goal play from the 1-yard line in the third quarter, it felt like this was Co-Lin’s night.

The teams traded punts back and forth throughout the fourth quarter as neither offense could piece together a string of positive plays without a penalty or busted assignment or bad snap moving them in the wrong direction.

Gulf Coast punter George Caratan is from Pacific Palisades, California while Lofton, the kicker and punter for the Wolves, hails from Sand Hill, Mississippi.

Thursday the pair earned their scholarships and meal money in the second half as they combined for six punts in the fourth quarter.

CLCC sophomore running back Drexlan Allen was another Wolf that left all he had on the turf of Stone Stadium Thursday. Allen carried the ball 28 times for 93 yards to keep the ball moving late as Co-Lin nursed that ugly 13-7 lead.

The Wolves defense flew to the ball throughout the night. Defensive coordinator William Jones group laid big hits, grabbed an interception in the first quarter and made the Bulldogs earn every yard.

Yet even a 19- or 20-year-old in the best shape of his life will eventually tire. The last drive for Gulf Coast was when the Bulldogs finally broke free from what had been sure fire tackles earlier in the game.

The ball ended up on the CLCC 10-yard line for the final score after a pass interference call moved it up 15-yards on the previous play.

For Allen and the offensive line and for coach Glenn Davis and his staff and for the defense that had played so hard all night as a group — it hurt.

That pain will fade though, and Co-Lin still has plenty to play for as they’re 2-1 in the South Division of the MACCC. This team has already shown a knack for staying together through hard times.

The season started for Co-Lin with two losses on the road before they began division play with wins against Southwest and Pearl River. South Division games remain to be played against East Central, Jones and Hinds — win those and you’re in the playoffs regardless of how much Thursday night stunk for the Wolves.

It’s not life or death after all. Have you ever said that phrase to someone or maybe heard it? Feels like something you’d either say or have said to you in an argument with your 13-year-old child.

It’s true though. Football isn’t life — nor is it death.

The pain that Gulf Coast had been dealing with all week is Mt. Everest compared to the little anthill of hurt that comes with losing a football game.

Last Thursday Hinds beat Gulf Coast in Raymond on a last second play of their own as the Eagles went ahead with 14 seconds left.

The bus trip back to Perkinston was surely a sour one. After the team arrived back on campus an even greater loss struck the MGCCC family.

Visitation for Madison is being held Friday in his native Meridian with burial taking place Saturday.

The go-ahead score for Gulf Coast came just after 9 p.m. Thursday night. Only 168 hours earlier, Madison had been on the field in Raymond, trying to get one more tackle to help his team hold off a Hinds comeback.

We all share the common trait of invincibility, at least that’s what we think until something bad happens. It’s easy to assume you’re going to live forever though when you’re 19 or 20-years old — especially when you’re a 6-foot-3, 350-pound tackling machine like Madison.

After the game the Gulf Coast players held his no. 99 jersey in the air as they celebrated.

Officials from Co-Lin are keen to share that their two-year old scoreboard video screen is the third largest in the state. The picture quality is crystal clear and its height and width is impressive from any seat in the house.

Prior to kickoff Thursday the screen shone brightly with an image of Madison during a moment of silence. He shoulders wide, his beard finely trimmed and the words 2001-2021 sitting towards the bottom of the screen.

Looking as he’ll forever be now, a 20-year-old who was bold and strong.

Didn’t matter who you were rooting for in the game, looking at Madison as his picture gazed over the field where he should have been playing caused a pit to come up in your stomach.

And boy, did that really hurt.