School board names board room for longtime attorney 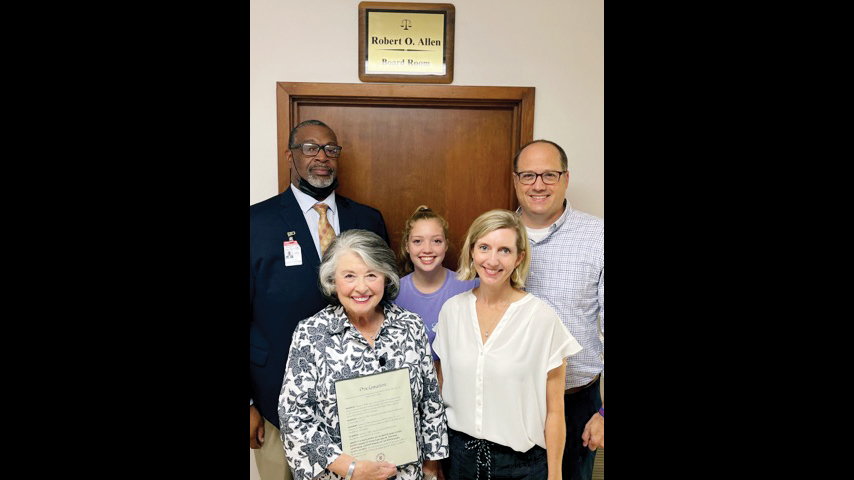 The Brookhaven School District’s boardroom has been named for a former board attorney.

At its regular meeting Tuesday night, the Board and Superintendent Dr. Roderick Henderson named the central office board room the Robert O. Allen Board Room in memory of its longtime attorney.

Robert “Bob” Allen served as the board’s attorney for 43 years until his death in 2020.

The board presented a proclamation to Allen’s widow, Pat Allen, and family, along with a plaque that now hangs over the board room door. The proclamation reads, in part:

Allen’s son, Will, now serves as the board attorney, following in the “big shoes” of his father and grandfather before him. Bob’s father Emmette Allen served as a board member, and was its attorney until the 1970s, when Bob Allen was hired.

“There’s been an Allen there for about 70 years,” Will Allen said.

When superintendent Henderson announced he was about to make a proclamation, Will said he thought it must be concerning some Boy Scouts who were present for the meeting. Instead, he saw his daughter walk into the room, followed by his wife and mother.

“He made the proclamation, then he walked us out into the hallway and I saw they had already hung the plaque over the door,” Will said. “It was a lot to take in, and such a sweet, sweet honor.”

The timing could not have been better for the honor, he said.

Bob Allen would have been moved by the dedication, his son said.

Going to work at the board meetings will be a little different in a good way for the current attorney, seeing his father’s name above the door as he enters, Will said.

“I love knowing that every time I walk into that board room it’s dedicated to him.”