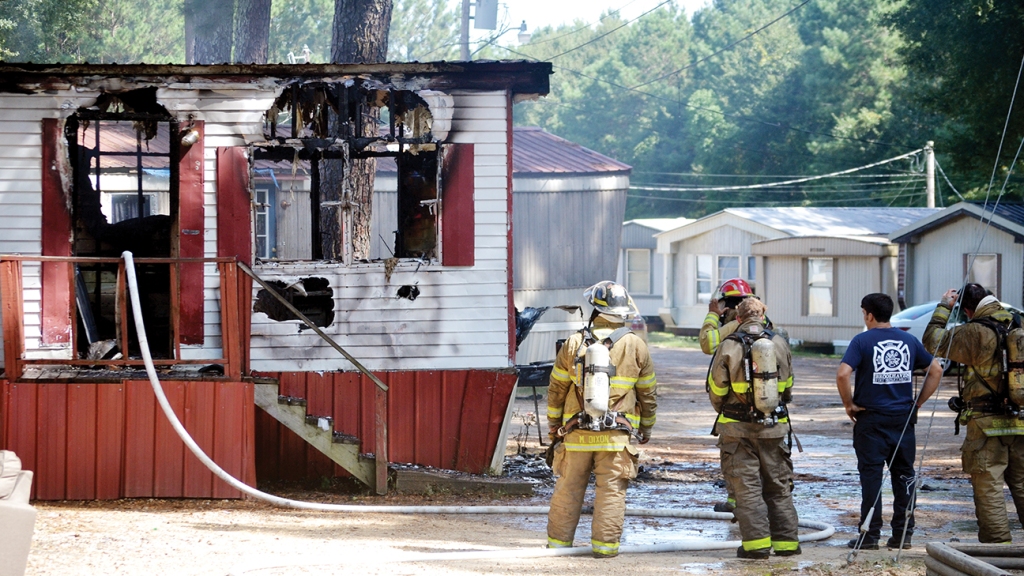 File photo Brookhaven fire fighters observe a home in a trailer park after it caught on fire. City leaders say safety standards are needed in such parks to make sure emergency personnel can provide needed assistance.

Mobile home parks within the city need a set of standards to improve safety and accessibility, according to City of Brookhaven aldermen and safety leaders.

During the Board of Aldermen’s regular meeting Tuesday, Ward 6 Alderman Andre’ Spiller said he had talked with Mayor Joe Cox, police Chief Kenneth Collins and fire Chief Jeff Ainsworth about problems in the city’s trailer parks when it came to fire, police or other emergency response.

“We have police officers, firemen and EMTs going in and there are, to me, some life safety issues,” Spiller said.

“It’s getting to the point where there are big ol’ potholes up in there. I know it’s private property but there are too many trailer parks making too much money off these people not to want to fix these places up,” Spiller said. “And it does something to me to know they’re getting this money and not doing nothing with it, you know, to be fixing up these properties.”

Spiller asked Collins to address how he felt about the safety issues with lack of lighting and other problems.

“It’s a dangerous situation for us, because we deal with them all the time,” Collins said. “You can’t see. They’re hiding behind dumpsters or trailers, and they’re shooting and fighting all the time. A lot of the roads are just impassable. It’s a mess.”

Referring to one trailer park off Industrial Park Road, Collins asked Ainsworth if he was able to get a fire truck into that park.

“It’s a mess. I’ve asked these guys for lighting. I’ve asked them to fix the roads. I’ve asked for getting a good surveillance system — that would help us a lot,” Collins said. “But when you go down in there, you don’t know what you’re going to get. This is something that we deal with almost all the time. They’re shooting and fighting all the time. That’s almost every day.”

“Yeah, it’s just bad,” Ainsworth said. “I know it’s a private drive, but — I mean, we’re not four-wheel drive. You pull in and … there’s so many (trailers) in there you’ve got to back all the way out and there are people everywhere.”

“So if you have a fire back on that back side up in there now back off Industrial Park, you couldn’t get your truck back in there,” Spiller said.

“There’s some of them, it’s impassable. You get in there and you get a truck stuck and you get another call and you’re stuck,” Ainsworth said.

“Have you passed through there recently?” Spiller asked Building Inspector David Fearn.

“Oh, yes. I go in all of them and I do electrical inspections,” Fearn said.

“What kind of condition are those old trailers in?” Spiller asked.

“A lot of them are in very poor condition. I wouldn’t let anybody live in them,” Fearn said.

“Maybe we need to go ahead and get this committee together and look at these ordinances,” Spiller said.

The mayor agreed, saying a recently formed committee of Spiller, Ward 1 Alderman James Magee Jr. and Ward 4 Alderman Jeff Henning would schedule its first meeting and “jump in with both feet.”

The committee will address safety hazards of access and lighting, among other issues. Cox said no one wanted the fire department “to be trying to get to that fire and put it out and somebody die in a house fire.”

“We’re going regardless,” Ainsworth said. “It’s all ‘this is private’ until they need us and private property doesn’t matter then.”

Cox said the first step would be to talk with property owners and move from there. He said he talked earlier in the day with the owner of one park who said he had plans to make several improvements on his lots.

Both chiefs and Spiller said numbering lots within parks is vital for responding to calls in an accurate and timely manner.

Aldermen and others present expressed their agreement to Collins’ final statement — “We need a set of standards.”