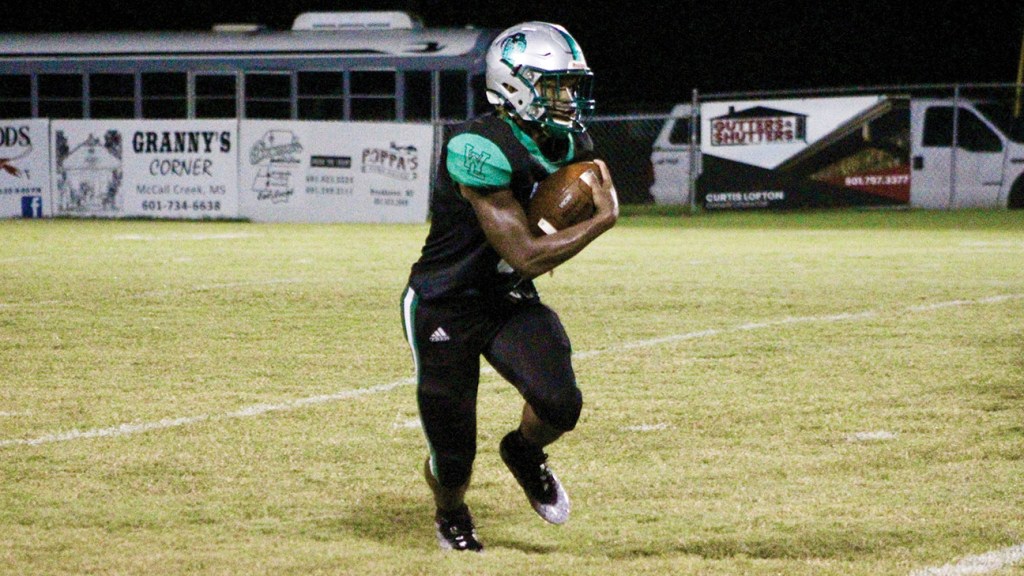 Photo by Cliff Furr West Lincoln senior running back Enrico Price scored three touchdowns Thursday in a 21-19 loss to St. Andrew’s. The Bears are on the road next week at Amite county.

The pain was evident Thursday night as the West Lincoln Bears walked off of Perry Miller Field after their homecoming game.

“I just hate it for our seniors,” said WL coach Brad Bland. “It’s not been for lack of effort or desire — these kids want to win so bad. We were just one or two plays away tonight.”

On the opposing sideline the St. Andrew’s Episcopal Saints and their fans prepared to head back north with a 21-19 win that came to fruition in the fourth quarter.

There were several moments that could have changed the game for the Bears. As the second quarter was ending, they drove down to the St. Andrew’s 1-yard line.

The next play was a snap that went over the head of everyone in the backfield. After a pass and then a run, the Bears didn’t have a timeout to stop the clock and saw the quarter end without them getting any points on the trip.

That fruitless drive was preceded by a punt return touchdown that was called back. Senior Enrico Price had fielded the punt on the run and raced 83-yard for the score, but a block in the back moved the ball back to where the foul occurred and set up the drive that ended with the halftime horn.

Price was outstanding all night as he went for a season high 170 yards on 23 carries and scored all three WL touchdowns.

Bland had his team in the I-Formation for the first time this season and the Bears responded with 353 total yards on the ground. Senior fullback Gabe Bush rushed 11 times for 101 yards.

St. Andrew’s went ahead on a 36-yard TD run by PJ Bryson that made the game 21-13.  The play before was another one of those big moments in the game.

The Bears swarmed to the ball to get a stop that would have given SAE a third and very long. The home team was called for a 15-yard penalty though, as they threw the ball carrier to the ground after the whistle had blown at stopped forward progress.

That gave the Saints the first down and set up their game winning score.

Price’s final score of the night came with 2:17 remaining in the game and from 15-yards out.

West Lincoln needed to get the 2-point conversion to force overtime, but a miscommunication in the backfield caused a collision of green-clad players and kept the play from developing.