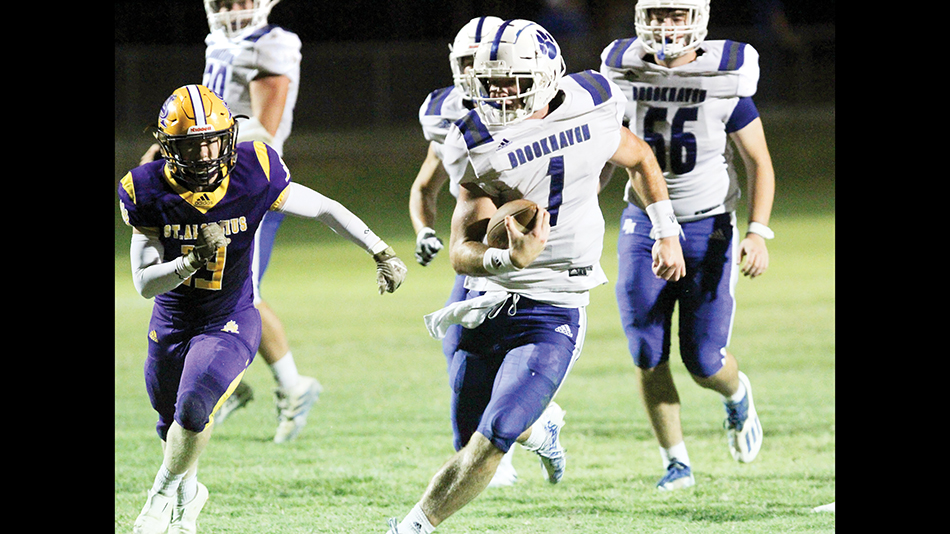 Brookhaven Academy quarterback Tyler Fortenberry had one of his typical games Friday at Centreville Academy. Fortenberry did everything his team needed in order to secure the win 31-7.

It was on the ground where the 6-foot-5, 215-pound senior and his offensive line did his most damage this week. Fortenberry carried the ball 15 times for 150 yards and two scores to earn The Daily Leader Offensive Player of the Week.

Fortenberry also threw for 124 yards on 11-of-19 passing. His 3-yard rushing TD put the team up 7-0 in the second quarter and his 33-yard run on the first play of the fourth quarter put the game away.

A three-sport star, the football portion of Fortenberry’s high school career is drawing to a close. BA ends the regular season at home Friday with a game against Wayne Academy that will decide who wins the district and where the Cougars will be seeded in the MAIS 4A bracket.

Fortenberry stepped into the starting QB role as a sophomore and the Cougars finished 7-5 that season before losing 56-7 to a Tri-County Academy team in the playoffs that would go on to lose in the state title game to Riverfield Academy.

Last season BA went 8-5 in Ron Rushing’s final year at the school. The Cougars and Fortenberry won two playoff games before losing 49-21 to Wayne Academy in the semifinals. Wayne then went on to lose in the state title game to Riverfield Academy.

The Cougars are 7-2 this season in Anthony Hart’s first year at the school.

The 4A bracket will be sorted out after games go final Friday night, but the field appears to have more depth this season than in years past.

Adams County Christian School is 7-2 overall after dropping down a classification and will be one of the top four seeds in the playoffs. The only loss of the season for Tri-County was a 19-18 setback to ACCS.

In the northern part of the state St. Joseph’s Catholic of Greenville is 7-1 and Marshall Academy of Holly Springs is currently 7-0.

It’s not fair, but it’s a fact of the quarterback position — how far BA goes will depend largely on Fortenberry leading them there.

And with senior linebacker Trenton Tarver out with an injury, it won’t just be passes or runs that the Cougar coaching staff will be counting on from their star QB.

They’ll need him to make tackles too and be in on a variety of plays that become the difference between winning and losing.

Fortenberry holds an offer in football from the University of South Alabama and he’ll have more opportunities than just that when it comes to sports on the collegiate level.

What he won’t have is many more high school football games, so expect the face of Cougar football to make the most of what’s left.