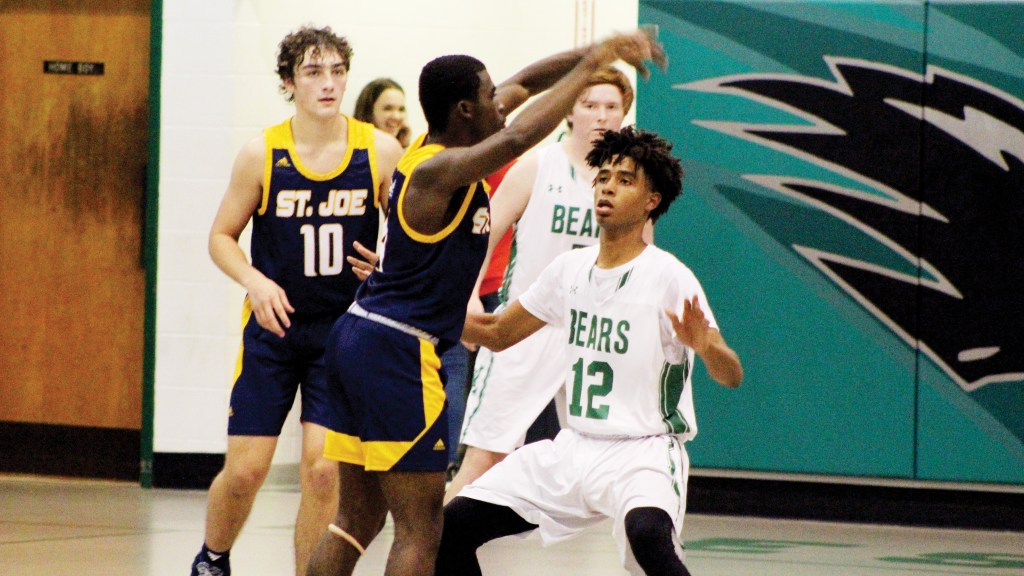 Photo by Cliff Furr Freshman guard Tyquarius Terrell applies pressure to the ball Thursday for West Lincoln in the second half against Madison-St. Joe.

The St. Joseph Bruins (4-0) made the trip south from Madison Thursday and unleashed a hailstorm of 3-pointers on the way to a 74-25 win over the homestanding West Lincoln Bears (0-3) in Jack Case Gymnasium.

The Bruins canned 11 3-pointers in total as they got a game high 21 points from 6-foot-3 senior wing Allen Teague.

Teague scored the first six points for his team on two long three pointers which were a preview of what was to come.

First-year West Lincoln coach Jay Case would love to have the manpower to jump out into a tight man-to-man defense, but the Bears aren’t ready for that yet. The zone used by West Lincoln slowed down St. Joe in the early going, but the Bruins eventually started making shots over the top.

Teague and 6-foot-5 forward James Turner towered over the tallest Bear on the court Thursday.

What Case does have is some young guards that will only get better with time and experience.

The fifth starter was senior Enrico Price who’s working his way back into basketball shape after the West Lincoln football season ended on Oct. 28.

Price is the leading returning scorer and rebounder for the team as he averaged 11 points and 7.9 rebounds per game last season for then head coach Brooks Smith. He scored eight Thursday against St. Joe.

The Bears went 1-15 last season with the last win coming on Dec. 14 over the Mississippi School for the Deaf.

The combined skid from last season is a 12-game losing streak as West Lincoln has dropped games to 3A Franklin County and 4A North Pike this season.

Stewart and Terrell are both combo guards that the Bears will count on to lead as the program grows under the tutelage of Case.

The Bears are small with no one much over 6-foot on the roster, with the exception of 6-foot-2 sophomore Baylor Sills. You’d expect that as Sills and 6-foot senior Aaron Sanders get back into better shape for hoops, the two football linemen will see more time inside to help West Lincoln secure rebounds.

Ball security was one of the main problems for the Bears against St. Joe. Balls went through the hands of West Lincoln rebounders and over the out-of-bounds line with the last touch on the home team.

Possessions dribbled too high and loose bounced off the foot of the handler for an unforced turnover. There’s much to work on and that’s what Case was doing throughout the game.

The third generation to coach West Lincoln basketball after his grandfather Jack and his father Jason, Jay Case called two quick first quarter timeouts to address mistakes by his team in a huddle with his dry-erase board.

The first was when a West Lincoln player failed to rotate out and cover Teague on one of his made 3-pointers.

Another timeout was called to reiterate who needed to go where on the press break offense.

St. Joe jumped into full-court-pressure whenever they scored throughout the first half as they built the halftime margin to 31-9 when a 3-pointer by Turner rattled in just before the horn to end the second quarter.

The high school Bears aren’t the only group on campus working on handling full-court pressure. The West Lincoln junior high team is trying to get better at the same thing themselves.

“We’re really small on the junior high level,” said Case. “We’ve got some kids that are going to grow and fill on out though. When I was in seventh grade I don’t know if we won a game. None of us had grown yet, but when we played those same teams as juniors and seniors, we beat them all.”

Increasing participation has been one of the early goals for Case and that’s trending in the right direction as West Lincoln has 18 on the varsity roster.

Junior Josh Thornhill is also a contributor off the bench for the Bears who didn’t play hoops last year, but he was unavailable for the team on Thursday. Thornhill pulls double duty and plays soccer as well and was with the futbol team on Perry Miller Field in a 3-2 win over North Pike.

“We’ve faced three pretty good teams to start the season off,” said Case. “When North Pike beat us by 40 and seeing that St. Joe had beaten them by 20, I knew this was going to be a tough one for my guys.”

St. Joe went 21-5 last season including a 68-35 win over West Lincoln in Madison. The Bruins and coach Michael Howell lost their top three scorers though and are a first-year member of the MAIS after moving over from the MHSAA. The Bruins and Brookhaven Academy are members of the same MAIS classification (5A) in basketball.

West Lincoln has two more games next week before the Thanksgiving break. The Bears will host both Wesson on Nov. 16 and Salem on Nov. 18. 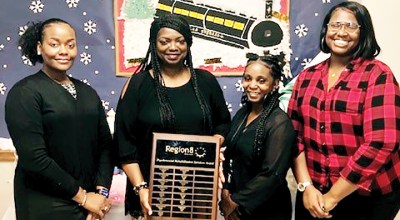 Panthers surge into 5A second round after dominating East…