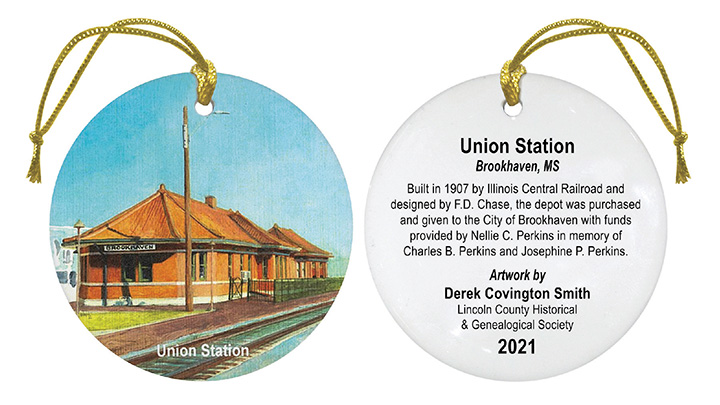 For the sixth consecutive year, the Lincoln County Historical and Genealogical Society has issued a keepsake Christmas ornament.

The 2021 offering is of Union Station, the Old Train Depot. Similar to previous ornaments, the Union Station ornament is reproduced on a ceramic circle from an original painting by a native Brookhaven artist.

“Derek Covington Smith has graciously provided us with the image for the 2021 ornament,” LCHGS member Tammie Brewer said.

Located in the heart of historic downtown Brookhaven, the depot was built in 1907 by Illinois Central Railroad and designed by F.D. Chase. The depot was purchased and donated to the City of Brookhaven with funds provided by Nellie C. Perkins in memory of Charles B. and Josephine P. Perkins.

The Depot ornament is the fourth produced from paintings by Smith. The bridge and auditorium ornaments were produced from a photograph and a line drawing, respectively.

The society’s historical museum — located in the former Temple B’Nai Sholom at 227 South Church St. — has been open by appointment only due to COVID concerns. However, during December the museum will be open during its regular hours, Tuesdays and Thursdays from 11 a.m. until 3 p.m.

In addition to the 2021 Christmas ornaments, a few ornaments from prior years are available for sale, as well as Lincoln County afghans and local history books. Ornaments are $25 each and are offered in very limited quantity. Preorders for the Union Station ornament can be made by contacting Brewer at 601-850-1733.

“We should have them (in) around the second week in December,” said Brewer. “We are taking paid pre-orders at the museum since we only ordered 50 ornaments this year. With COVID, our activities have been limited and so is our budget.”

All proceeds from ornament and other sales help fund the museum’s costs, such as utilities and insurance.

Pastor: ‘A Celebration of Life in Lights’ will be…