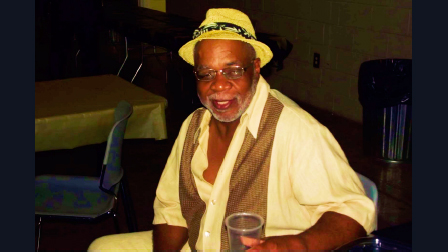 On the evening of November 12, 2021, one of Jehovah’s living souls went to rest, a soul tempered and made ready by his struggle to regain his physical mobility but humbled and prepared to peacefully accept Jehovah’s will and plan for his resurrection.

Bruce Leon Benson was born in Brookhaven, Mississippi, on March 1, 1955, to the late Claude Leon (C.L.) and May V Benson. As a toddler he was the apple of his Father’s eye because Daddy saw they were just alike, strong in body, fierce in spirit and kind in heart, with the willingness to literally give the shirt off his back.

As a young boy growing up in the South Brookhaven neighborhood of Petersburg, he loved to ride horses, fish, and play in the woods, often wandering to where only he and God knew how he got there. If the creek had a “Chitto” or a “Bahala” in its name, Bruce knew where it would take you. As a young man he loved fast cars and motorcycles and he was always ready for a road trip.

Bruce was educated in the Brookhaven School District, first at Mullins Elementary and then at Lipsey Junior High when in 1966, he along with his twin sister, Abenna, and two other children integrated Lipsey, where, in spite of the times, Bruce quickly made friends. From Lipsey, Bruce went on to attend the Piney Woods School and the Job Corps, where he obtained his high school diploma and entered the United States Marine Corps. Upon completing his honorable service and being discharged, he attended Copiah-Lincoln Junior College where he received certification as a CNC Machinist. He was an avid reader and took great pride in his math skills. As a child he was a member of Bethel AME Church and in his last years diligently studied with Jehovah’s Witnesses.

After graduation from Co-Lin, Bruce went to work at Packard Electric for a few years but primarily spent his life being self-employed with whatever suited his interest, be it hauling cars, lawn service, cleaning out houses or flipping truckloads of melons. Throughout his life, he was his own man.

In addition to his parents, he was preceded in death by his maternal grandparents, Fermon and Jenny L. Ellis of Gallman, Mississippi, and, paternal grandparents, James and Louise Benson of Brookhaven. He leaves to mourn his passing, his twin sister and brother-in-law, Abenna and Herman Jones of Gulfport, Mississippi, his oldest brother, James Hayes of Oak Park, Illinois, his older brother and sister-in-law, Ronny and Sylvia Benson of Aliquippa, Pennsylvania. He also leaves nieces, Allison and Allisia Jones of Gulfport, Mississippi, Heather Conerly of Des Moines, Iowa and, Olivia Benson-Galina (Andrew) of Mt. Lebanon, Pennsylvania, a great nephew Henry Benson Galina and dear aunts, Jenny L. Howard of Springfield, Massachusetts and Betty Ellis of Atlanta, Georgia, a host of cousins and extended family, including his in-laws in Aliquippa, Pennsylvania, who always looked forward to his visits, as well as many dear friends and lifelong neighbors.

The family wishes to thank the many family members and friends for the outpouring of messages, calls and media postings extending condolences and prayers to us during this time of immense loss. We would also like to thank the staff and management of the Pillars of Biloxi for the outstanding care and support given to Bruce during his time there, especially to Greta Jordan, Nurse Assistant, who cared for Bruce like a daughter, and Linda Cumbersome, Nurse Assistant, who stayed with Bruce until his end. We are also thankful for the Biloxi Kingdom Hall of Jehovah’s Witnesses who guided Bruce through his last spiritual journey.

An online memorial service will be conducted for Bruce on Saturday, December 4, 2021, at 2:00 by the Biloxi Kingdom Hall of Jehovah’s. Those wishes to witness his service may do so at www.zoom.us, Meeting ID 819 8089 7859, Passcode 349588. A private internment of his ashes will take place at a later date and, when weather permits and COVID allows, the family will hold a backyard repass at his Brookhaven home to celebrate Bruce’s life. We will dearly miss our Bruce.