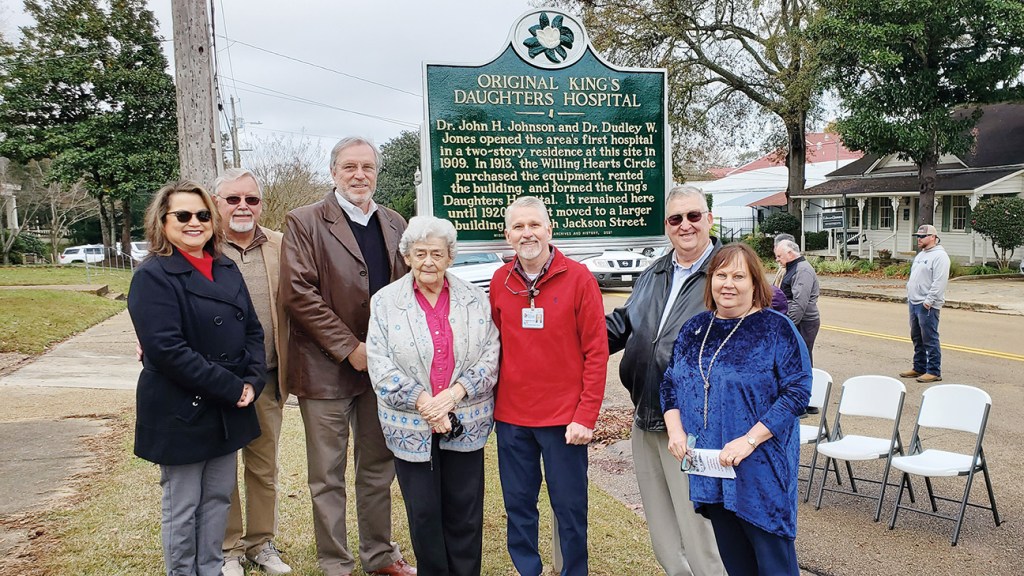 A new historical marker has been unveiled in Brookhaven to commemorate the city’s first hospital.

Members of the Lincoln County Genealogical and Historical Society and Willing Hearts Circle of King’s Daughters and Sons unveiled the marker this week at 119 West Cherokee St.

“Today we come to dedicate the state historical marker for the first King’s Daughters Hospital,” said Joe Brown of the historical society. “It was a two-storey building, and it’s been modified since then … but part of this building on the (east) side is still original to the house. This site is owned by Betsy Smith Properties and I’d like to thank the family for coming today and allowing us to identify this historic location.”

Brookhaven Mayor Joe Cox said he was happy to see the marker erected.

“I can’t wait to see what y’all end up doing with this property. I’ve known for a long time that this was the original hospital and I’m glad to see it now get the recognition,” he said.

The original hospital was opened in 1909 on West Chickasaw Street by Dr. John Harvey Johnson ad Dr. Dudley Watson Jones. Though Wilson Infirmary had been established in May 1908 in nearby Pearlhaven — making it the first hospital in Lincoln County — the doctors’ effort on West Chickasaw was the first within Brookhaven.

When the county was formed in 1870, 14 physicians were named on the census, likely including a couple of dentists. In 1904, Dr. Johnson saw a need for a hospital and looked into the expense of establishing and maintaining one. With the backing of several local doctors and businessmen, work began in 1909, according to research completed by Sue Dorman and Tammie Brewer of the Historical Society.

Johnson purchased the John Wright property, a two-storey wood framed building, and remodeled it to include an operating room and several patient rooms. Dr. Jones joined as partner and the hospital was almost ready for patients in late May 1909. The first nurse was a Miss McCaughan from New Orleans.

By June 9, three patients were being cared for by the doctors and McCaughan. In 1913, the Willing Hearts Circle of King’s Daughters and Sons took over operation of the hospital. They rented the building and purchased all the furnishings except the operating room equipment.

The Circle operated the hospital at that location until 1920, when it was moved to a larger location at the corner of North Jackson and West Congress streets. In 1964, the hospital relocated to its current location on Hwy. 51 and was renamed in 1999 to King’s Daughters Medical Center.

“It’s an honor and a privilege to be here today. King’s Daughters is here to always provide quality health and wellness in a Christian environment. That’s a tradition that’s been here since the very beginning and one that continues today,” said KDMC CEO Alvin Hoover. “I think back to 2014 when we celebrated 100 years for King’s Daughters Medical Center. What a heritage and a history we have to be a part of something like this. The men and women that started this hospital have a heart and a passion to take care of people and we continue that tradition today.”

The Mississippi Department of Archives and History-approved sign stands on the lawn in front of the original hospital location.

For video of portions of the dedication: