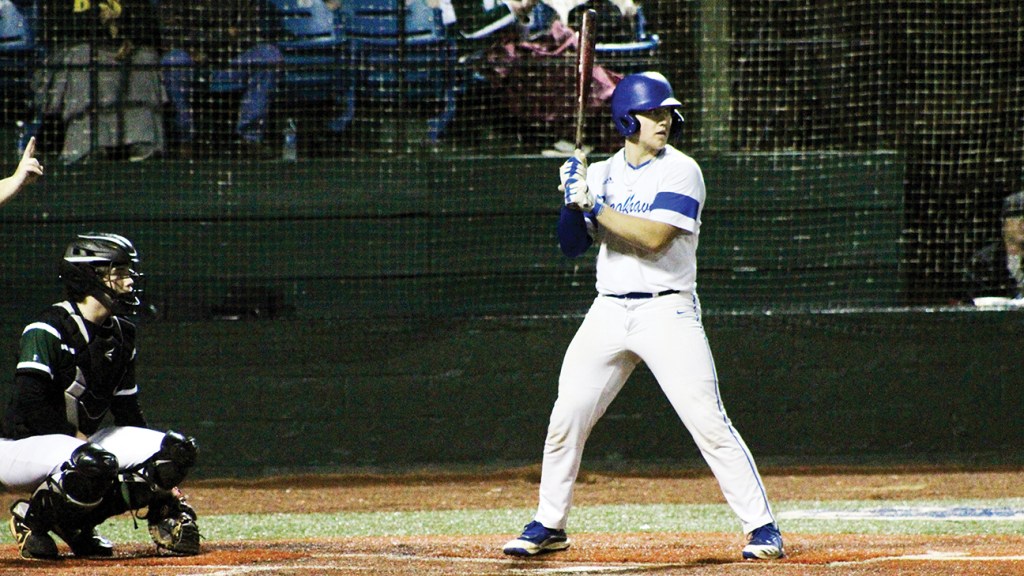 File photo Brookhaven Academy senior catcher Trenton Tarver drove in five runs via two home runs Thursday, including the game winner in the bottom of the ninth, to help give his team a 7-4 win over Copiah Academy in game two of the MAIS 5A semifinals.

“The Natural” is a baseball classic that was released in 1984 and starred Robert Redford.

The climactic moment of the movie comes when Redford’s character, Roy Hobbs, smashes a homerun in the bottom of the ninth inning to give his team an improbable win and the National League pennant.

Hobbs jolts his homerun into a tower of lights on the field and sets off an electrical storm of bursting bulbs and raining sparks as he rounds the bases for the win.

Thursday, Williams-Gillis Ballpark at Brookhaven Academy could have also been mistaken for a movie set.

Facing elimination in the second game of their MAIS 5A semifinal matchup with Copiah Academy, the Cougars came to bat in the bottom of the ninth inning with the game tied at 4-4.

Senior catcher Trenton Tarver stepped to the plate with runners on first and second base. If those bases had not been occupied, Tarver surely would have drawn an intentional walk as he’d already hit a round tripper earlier in the game.

Copiah had to pitch to him though, and Tarver made them pay.

With lightning popping in the background of a dark sky that would soon open with rain, Tarver crushed a high fastball over the tallest part of the centerfield wall to give his team a 7-4 walk-off win in a Hollywood worthy moment.

“It’s definitely one of the coolest things to ever happen to me in my life,” said Tarver. “I just kept thinking that I didn’t want this to be my last high school baseball game and I knew my team needed me to make something happen.”

Tarver put his team up 2-0 in the fourth inning with his first home run that also scored fellow senior Caston Thompson.

BA led 4-0 after two innings in the first game of the series on Tuesday in Gallman, but Copiah Academy came roaring back to take a 15-5 win in a game that was run-ruled to five innings.

There was a sense of dreaded deja vu on Thursday when Copiah rebounded in the next half inning to tie the game at 2-2.

Thus, started a tennis match of sorts as the teams traded runs. BA scored two more runs in the bottom of the sixth to go up 4-2 and needed only three outs to end the game and force a rubber-match on Saturday.

However, Copiah answered the bell with two more runs in the top half of the seventh to send the game to extra innings.

The Cougars left a runner stranded on third to end the eighth as they also left runs on the basepaths in the fifth via an inning-ending double play that came with Cougars on first and second base.

Tarver’s game winner was made possible by senior center fielder Michael Watts drawing a walk to start the bottom of the ninth. Watts then moved up to second on a sacrifice bunt by Judson Griffin.

Junior pitcher Easton Boyte started on the mound for the Cougars and went six innings while throwing 75 pitches. He gave up three earned runs, struck out two and scattered six hits.

Thompson, a senior who’s signed with Pearl River CC, has dealt with an upper body injury of late that’s limited his time on the mound.

When BA coach Caleb Upton asked him if he’d be ready to throw in relief on Thursday, his answer was quick and decisive.

“He told me, ‘I can go, Coach. I’m not letting us lose this game,’” said Upton. “Caston is definitely a guy who’s the heartbeat of this team. He and Trenton lead from the front and they’re the type that inspire their teammates with the plays they make.”

Thompson came on to throw three innings of two-hit ball in relief.

The deciding game of the series is scheduled to be played Saturday at 6 p.m. at Copiah Academy. Upton said the chance of rain might affect that start time, but the plan for now is to begin the game at 6 p.m. in Gallman.

“I’m sure for an unbiased observer, the game was a lot of fun to watch on Thursday,” said Upton for a laugh. “For me though, it felt like it took years off my life. We’re fortunate to get to play one more and we know Copiah is going to be ready to play too.”