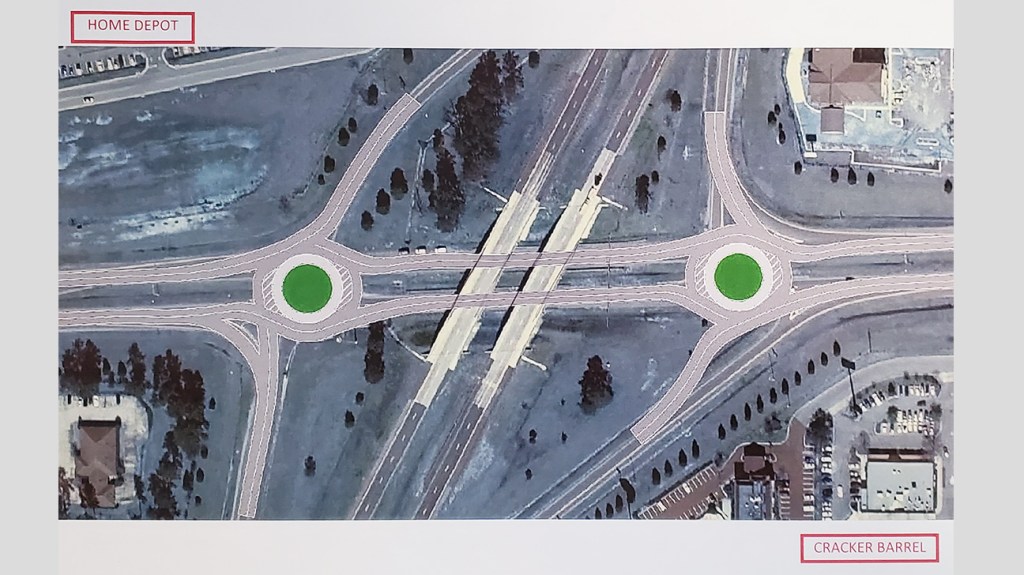 The Mississippi Department of Transportation plans to ease traffic issues at Exit 40 in Brookhaven with the addition of roundabouts.

The traffic circles will be placed on Brookway Boulevard, one constructed on each side of Interstate 55.

Approximately 23,000 to 24,000 vehicles enter or exit the interstate at Exit 40, or travel along the boulevard through that area on a daily basis. The traffic counts match closely to the number of vehicles traveling along I-55 through the city.

City Engineer Mike McKenzie, of WGK Engineering, said the planning and development stage of the project will take approximately one and a half years, with construction beginning in early 2024.

“MDOT asked us could we stand to close all the lanes under I-55 during construction,” McKenzie said at the recent Brookhaven Board of Aldermen meeting. “We didn’t think that would be such a good idea.”

Closing all the lanes under I-55 would require all traffic to be rerouted, preventing residents, workers and shoppers from easily accessing the opposite side of the interstate. Instead, MDOT will close only one or two lanes at a time, allowing traffic to continue to flow under the interstate, though at a more cautionary pace.

Not closing all the lanes at once could extend the overall construction phase of the project from an estimated six months up to 18 months, McKenzie said, but it would be “absolute lunacy” to sever the throughway for half of a year.

No other exit along I-55 in Mississippi currently has roundabouts, though Exit 20 at Summit has been approved to be the first to have them. By the end of construction in Lincoln County, Brookhaven will be the second location in the state to employ the circles.

When more than one alderman said they were wary that roundabouts will cause further or new problems in traffic flow, McKenzie said the design will alleviate those concerns. Rather than a small radius and tight turns, such as at the Jackson-Medgar Wiley Evers International Airport, these traffic circles will be larger and easier to navigate.

“From an engineering perspective, you’ll be fine,” he said. “They just have to be big.”