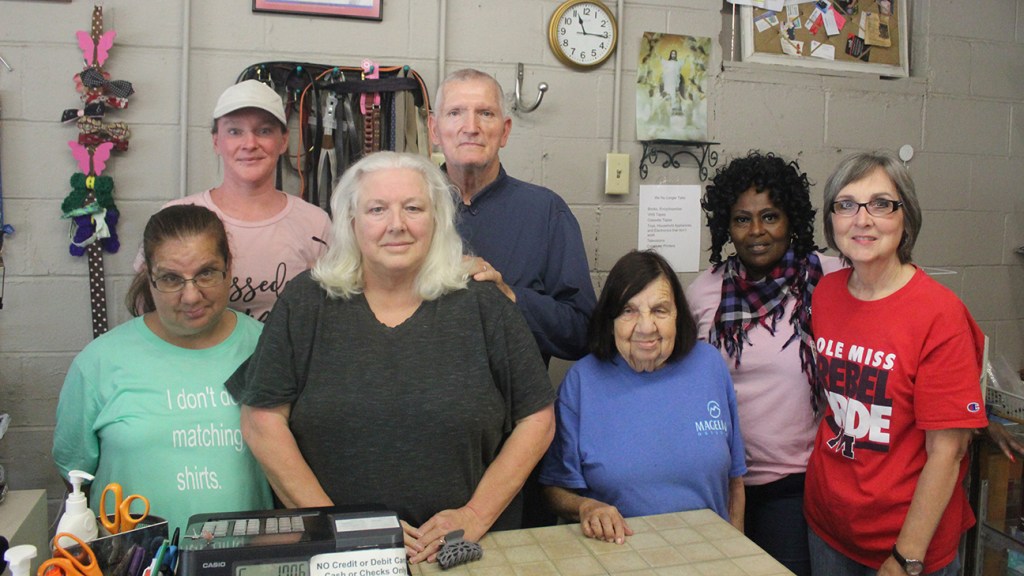 PHOTO BY HUNTER CLOUD This is most of the volunteers at The Yard Sale Place located on Congress Street near where The Dart landed in Brookhaven Friday. Lorriane Ezell, in red, started the ministry 19 years ago and moved them into their current location 10 years ago this month.

Lorriane Ezell stood behind the counter at The Yard Sale Place on Congress Street close to where The Dart landed Friday morning. She is a native of Brookhaven and graduated from Brookhaven High School.

Her first job was at The Frosty Inn before working for three years at Kux Jewelers. After high school, she got married to her husband. They have been married for 45 years.

She said they met at church, and it was love at first sight “For him.” His work required him to be away from home, so she chose to stay at home to spend time with him when he was off from work. In those 45 years, she has learned a few things.

“It takes three. You have to have the Lord in your marriage. You will go through good times and bad times, so you have to have some foundation,” she said. “It helps you get through the hard times. It is not 50/50 but 100/100. You have to be committed. You can’t give half.”

Her faith in God is what has kept her in Brookhaven all of these years. He has not directed them to move but instead called her into ministry. In the 1990’s, she founded the ministry found on Congress Street.

At first she served as an evangelist missionary. Over time, He spoke to her heart to provide for the physical and spiritual needs of people in Brookhaven.

She started out with the ministry in her home and then a storage unit. On August 16, 2012, she opened the doors to the current location on Congress Street. They are celebrating their anniversary with month-long sales to give back to the community.

“We help people and a lot of homeless people. We help those who need clothing, those who have survived fires or need a fresh start,” Ezell said. “It is about seeing a need and filling a need as we have the funds to do it. Everything here is donated, and the people here have been good and gracious to us. We have an appreciation of the community for their help.”

People who wish to donate to the ministry can bring items to the shop when they are open on Thursdays and Fridays from 9 a.m. to 5 p.m.  and Saturdays, 9 a.m. to 2 p.m.

One of her favorite things about the ministry is the people she has met over the last 10 years.

“We get to pray for people and help them,” Ezell said. “We let them know about someone we can point them to. Jesus is the answer. Seeing people leave feeling encouraged and filled with hope is a blessing to us.”

In her free time she is active in her church and tries to spend as much time with her two grandchildren as she can.

She took up jewelry making in her spare time over the last four years. It started with an idea one day, and she thought it would be neat to learn how to make jewelry.

A lifelong resident of Brookhaven, she has grown where she was planted.

“I know I’m where God wants me to be. He planted us here, He built our home here and He hasn’t directed us anywhere,” she said. “One of His first messages was to follow Him.   If He tells me to move I will move. If He tells me to open this place I open it. He has a plan for every one of us.”