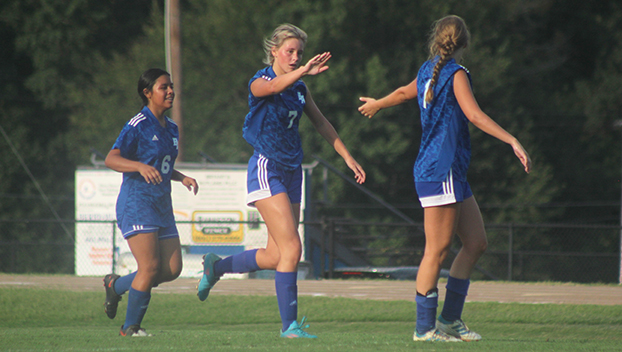 GALLMAN — Brookhaven Academy had a nose for goal Tuesday evening. They put six shots past Copiah Academy to win their first game in district play 6-0.

Reagan Fortenberry, a junior striker, scored a hat-trick with two goals in the first half and one in the second. Her favorite goal of the game came off of a corner kick.

Freshman Karen Hernandez fired in a cross and Fortenberry made a run at the near post. She jumped and flicked the ball with her head to the left and it trickled in.

“I had to come in to connect with it at the near post. It’s my first header I think,” Fortenberry said. “It felt pretty good coming off my head. I was shocked.”

She said it was her second hat-trick of the season, her highest goal-scoring game was four against Manchester this season. Her teammates played a big role in getting the ball to her and creating those opportunities.

She said the win was important to set the course for a district title.

Her goal this season is to improve her ball handling and footwork.

Last year her head coach Alex Brown and a few of her teammates talked her into joining the team. She has stuck with the game since starting last year.

“It is so much fun. I love the game. I would like to play in college,” Fortenberry said. “Hopefully by my senior year, I will have a few schools interested in me.”

Senior Kate LeBlanc scored two goals in the contest and sophomore Ava Calcote scored a goal off a corner for the Cougars. Brown said LeBlanc does not typically find herself on the scoresheet because of the role she plays for the team.

She is the team captain and one of the most mature girls he has coached, Brown said. It is a dangerous combination up front for the Cougars with Hernandez who had three assists as a winger.

“LeBlanc is a facilitator and does a great job of setting her teammates up,” Brown said. “Reagan will be a goal scorer. She does a good job of being patient and using her pace to get forward to the goal, and she did that tonight. Hernandes is huge for us and she is one of our key pieces getting forward. She is a smart passer and does a great job setting her teammates up.”

BA will return to play Thursday with a game at St. Augustine. Brown said he saw a few things they could improve upon ahead of their next district game against ACCS on August 29.

He was proud of the team for maintaining their energy and kept their foot on the gas. It is something they can carry over the next couple of non-district games ahead of the match against AC.

“I love how hard they work and stay on each other to be better. There are always things you can improve,” Brown said. “We are taking steps I feel are necessary, and we are getting better. By the time our next game comes, I think they will be eager.”