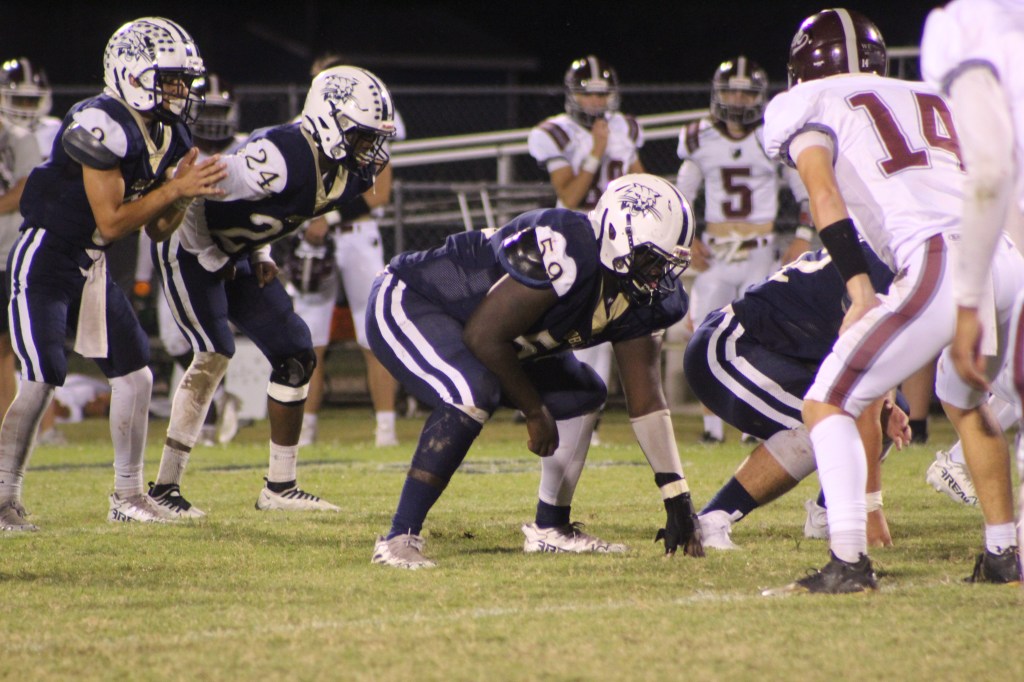 PHOTO BY CLIFF FURR Bogue Chitto quarterback Colton Frith (No. 2), running back Ken May (no. 24) and offensive lineman Jay May (No. 59) wait for the snap of the ball Friday against Puckett.

The stands and fences at Troy Smith Field were ringed with current and former Bobcats as Bogue Chitto hosted a huge crowd to see a tangle with the Puckett Wolves Friday for the 2022 Homecoming Game.

Puckett came in with a 4-0 record while Bogue Chitto looked to rebound after a 21-14 loss last week at Mize dropped the Bobcats to 3-1 on the season.

Bogue Chitto was dominate from the opening whistle as coach Gareth Sartin’s team whipped the visiting Wolves in every aspect of the game for a 27-7 win that didn’t even feel that close.

“It was a great team win, especially to bounce back from our first loss of the season last week in a close game with Mize,” said Sartin afterwards. “Our defense has been playing really well to start the year and tonight other than one drive, they kept Puckett in check.”

Junior kicker Andrew Merrell blasted a ball into the endzone on the opening kickoff and Puckett soon punted after its initial possession went nowhere.

The BC offense took over and showed Puckett what type of night they’d be in for on the first Bobcat possession of the game.

A nine-play drive that was a mix of runs and throws had the Puckett defense on its heels from snap to snap.

Quarterback Colton Frith is a three-year starter at the position and his reads helped BC move the ball masterfully down the field.

A 14-yard run by big sophomore Isaiah Collins got BC down to the 1-yard line and Frith punched it in on the next play via a sneak that made the score 7-0 with 7:20 left in the first quarter.

Puckett quarterback Matthew Boszer is a name that’s familiar to area sports fans as he’s a standout pitcher that’s made several appearances against local 2A teams in the baseball postseason.

Boszer is committed to play baseball at East Central after being recruited by almost every JUCO in the state.

The BC defense was ready for anything he tossed their way as senior defensive back Cameron Williams said his team was ultra-prepared after having a great week of practice.

“We knew they’d run the dive and we knew they were going to try to get the ball to a couple certain receivers and we just worked all week to make sure everyone knew their job,” said Williams.

Knowing your job and the job of the man next to you is important at a 2A school like Bogue Chitto where many of the most vital players play both ways.

BC lost another backer late in the game Friday when Ken May went down with an injury. There were banged up Bobcats all over the field that were playing through the aches and pains that come with high school football.

As well as the BC offense moved the ball early, it looked like they might go into halftime with just a 7-0 lead as Puckett had the ball deep in their own territory with two minutes left before the break.

Boszer rolled out and attempted a pass on the run that went straight into the arms of Bogue Chitto senior linebacker Jay May.

May tucked the ball into his stomach and raced in for a 13-yard interception return score that made the game 14-0 with 1:56 left before half.

“I looked up and there was nothing but green grass in front of me,” said a smiling May after the game.

Like Williams, May is a 4-year starter for the Bobcats, the rare combination that plays offensive line and linebacker and a guy who almost never gets a sideline rest throughout the game.

Bogue Chitto received the second half kickoff and put on a clinic in possession football to extend the lead behind an offensive line that was having it’s way with Puckett up front.

It was like death by a thousand papercuts for the Puckett defense.

They didn’t know if Frith was going to hand the ball off to Williams on a sweep or Collins on a dive — or if the shifty quarterback would keep the ball himself — or if he’d hook up with receivers like Jax Leggett, Noah Gatlin or Noah Magee for quick, efficient gains.

Frith scored on another 1-yard run to make the BC lead 21-0 with 5:25 remaining in the third quarter after Merrell’s third straight PAT conversion kick.

A 70-yard bomb of a touchdown pass from Frith to Magee padded the lead in the third to put BC up 27-0.

Puckett kept fighting and got a late passing score to get on the board in the fourth quarter.

Two more Puckett drives were shut down by turnovers in the second half, one via a Williams interception that came with less than a minute left in the game and the other on an fumble recovery by freshman Tripp McCaffrey.

Next up for the Bobcats is the start of region play, they’ll host West Lincoln on Friday in the Region 7-2A opener for both teams.

The week after that, they’ll head to Loyd Star for a highly anticipated version of the 2022 Possum Bowl.

“We just got to keep working to get better,” said May after the game. “That was the message that coach had for us after the game, with our division games coming up, we’ve still got room to improve each week in practice.”

In other games played throughout the area on Friday, Wesson was outscored by Mize 42-33 for homecoming, Lawrence County remained unbeaten with a 56-20 win over Tylertown, Brookhaven Academy moved to 2-0 in district play with a 20-6 win over Columbia Academy, Taylorsville beat Enterprise 53-6, West Lincoln lost 43-13 at East Rankin Academy, West Jones left Brookhaven High with a 24-6 win and Loyd Star pummeled Stringer 37-0.