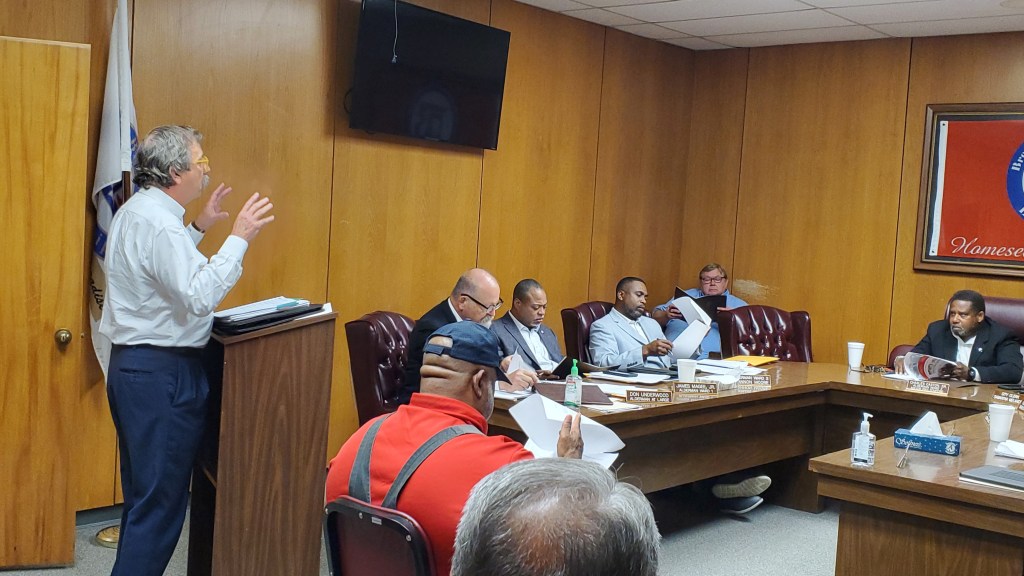 PHOTO BY BRETT CAMPBELL IRM’s Mike Smith speaks to the Board of Aldermen.

The Board of Aldermen has approved remaining with The Travelers Companies for the City’s General Liability Group Insurance.

Insurance Risk Managers Vice President Mike Smith presented the singular bid to the board during its regular meeting Tuesday. Though there were no other options, Smith said the City would receive good coverage for the price of premiums.

Smith said he had asked the City to approve a 10 percent increase to cover expected rising costs of premiums, but the increase in cost actually amounted to 6.6 percent.

The City’s properties have been revalued for the first time in several years, and now total a worth of $26,594,462.

Smith said although the number of workers compensation claims had risen over the past year, rates have actually decreased, so the city will not be expected to pay more in workers comp premiums for the coming year.

The Board appeared satisfied with the report and voted unanimously to approve staying with Travelers.

• Approved a request from engineer Ryan Holmes to accept a bid to relocate a fence at the Brookhaven Airport. The Federal Aviation Administration said the fence is in the runway safety zone and must be moved. The low bid was from Calhoun Fencing in the amount of $9,200.

• Approved a request from Holmes to apply for a 100-percent Airport Improvement Program grant.

• Heard a report from engineer Mike McKenzie that progress on the KDMC well is waiting on an electrical disconnect switch that has been ordered, but no projected date of arrival has been given for the part. Meanwhile, workers will attempt to get the well manually operable as soon as possible so it can be used in an emergency if needed before the part arrives.

• Approved a Municipal Advisor Agreement between the City and Daylight Advisors, and a G-42 Disclosure Statement. A municipal financial advisor firm is necessary for the issuance of a Solid Waste Revenue Bond. Larry Day II was present on behalf of Daylight Advisors.

• Hired Christopher Markham as a laborer in the Water Department at $9.55 per hour, pending drug test and physical.

• Hired William Terrell Jones and Eli Leonard as operators in the Solid Waste Department at $10.74 per hour, pending drug tests and physicals.

• Hired Quay Shun Edwards as driver/operator in the Solid Waste Department at $12 per hour, pending drug test and physical.

• Approved emergency repair of the Linbrook Well, damaged by lightning.