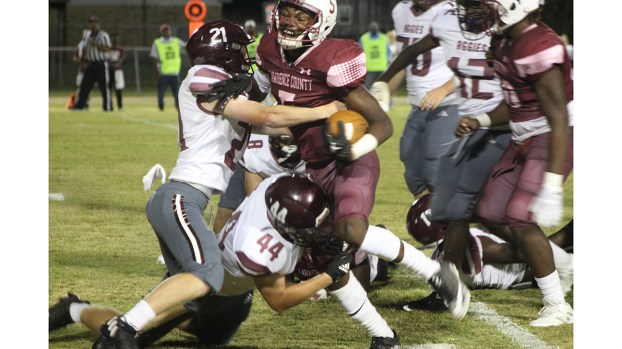 PHOTO BY CLIFF FURR Junior running back Zion Thomas scored twice for Lawrence County in the first half Friday as the Cougars traded scores throughout the game with the visiting Forrest County AHS Aggies. 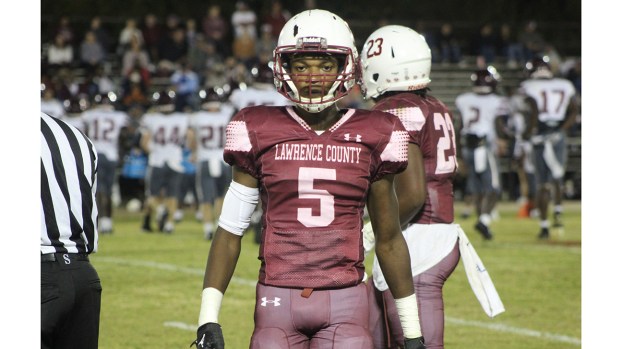 PHOTO BY CLIFF FURR Junior running back Zion Thomas scored twice for Lawrence County in the first half Friday as the Cougars traded scores throughout the game with the visiting Forrest County AHS Aggies.

The large crowd that gathered Friday night in Monticello to celebrate homecoming at Lawrence County saw big plays that started soon after the crowning of 2022 Homecoming Queen Destiny Brown and didn’t stop until the final whistle.

When the smoked settled, Lawrence County (6-0) is still undefeated after beating Forest County Agricultural High School 47-42 in the Region 7-4A opener for both schools.

The Aggies (4-2) and Cougars run a similar offensive system built around a double-wing formation.

LC head coach and play caller Jesse Anderson showed off the depth of his offensive backfield on the first drive of the game.

Hardy plowed through two Aggies at the goal line to put LC up 7-0 with 7:29 left in the first quarter.

Standing in the back of the endzone, Hardy pulled off a crane kick like Daniel LaRusso at the 1984 All Valley Karate Tournament to celebrate the score.

When Forrest County coach Larry Dolan and his team took over on their first offensive possession, there was Hardy again — getting a tackle for loss on first down for Lawrence County from his linebacker position.

Dolan won a state title at Forrest County AHS in 2006 and was head coach in Brooklyn for 14 years in his first stint at the school.

He coached at Columbia Academy, Pearl River Central and went 29-6 in three seasons at D’Iberville before coming back to lead the Aggies again this season.

FCAHS put together a grinding drive to tie the game up at 7-7 with 2:07 left in the first quarter.

LC responded with a big play, this one a 71-yard touchdown run by Thomas.

Thomas stayed hot with a second quarter touchdown run from the 18-yard line to put Lawrence County ahead 20-7.

The Aggies went to the air to cut that lead to 20-14 when Brett Robertson hit Alex Csaszar on a 33-yard touchdown pass with just 51 seconds left before halftime.

Hardy broke off a long run down to the FC 24-yard line that had Cougar fans thinking more points before the end of the second quarter.

On the 18-yard line, Anderson fed Hardy the ball on a handoff that ended up being the final play of the opening half.

Hardy trucked a FCAHS defender at the goal line to score with no time remaining in the second quarter.

The teams continued to trade scores in the second half, but LC never surrendered its lead.

The game was the fifth straight time for Lawrence County to top the 40-point mark this season.

The next test will be a big one as the Cougars hit the road next week to face the Poplarville Hornets (5-1) in Pearl River County.

West Lincoln sprung back-to-back scores in the second quarter after getting a touchdown and then recovering an onside kick before they scored again.

On the opening kickoff of the second half, BC senior Cameron Williams returned the kick 85-yards for a touchdown.

The ensuing kickoff also went for a touchdown return, this one for 90-yards from West Lincoln sophomore Tyler Hall.

Bogue Chitto is on the road next week for a big Possum Bowl matchup at Loyd Star.

The Brookhaven Academy Cougars faced little resistance on Friday in Bay Springs as they moved past the homestanding Sylva-Bay Academy Saints by a 35-0 final score.

The capper of the night was a 65-yard touchdown run by senior running back Easton Boyte, who came back from an injury that kept him out the last few weeks of action.

The road trip for BA continues next week with a drive to Liberty to take on the Amite School Center Rebels.

A scoreless game for three quarters was decided by back-to-back fourth quarter scores for Laurel and Brookhaven High Friday between the bricks in Jones County.

Laurel scored first after a fruitful drive in the fourth quarter put the Golden Tornados ahead 7-0.

Brookhaven High responded on its next drive with a 60-yard scoring run by junior running back Xavier Gayten got the Panthers on the board with just over 10 minutes left in the game.

The Panthers went for a 2-point conversion — a necessity since junior kicker Bryce Smith went down in the season opener — and narrowly missed a passing attempt on the attempt.

A Laurel field goal attempt ended in a turnover and gave BHS one more drive late in the game, but the possession stalled at midfield.

“At the end of the day, we had a chance to win this game and just missed on making it happen,” said BHS coach Tucker Peavey. “Our defense played great all night, they were flying around and hustling on every play.”

An early 14-0 East Marion lead proved to be insurmountable Friday on the road for the Loyd Star Hornets (4-2, 0-1).

East Marion moves to 2-4 on the season with the win after playing a tough non-division slate that included their 3A county rivals from West Marion, 4A powerhouse Columbia, 3A Jefferson County and 4A Northeast Jones.

Coach Brian Ford’s Loyd Star team will have to regroup quickly as the upcoming Possum Bowl at home on Friday against Bogue Chitto will have big implications in the Region 7-2A standings.

The defending MHSAA 1A state champion Bay Springs Bulldogs (5-1) left Lincoln County with a 52-0 win over the Enterprise Yellow Jackets (0-5) on Friday.

EAC and coach Trey Woodard remain in the thick of Region 4-1A play next week with a road trip to Richton High.

Hazlehurst led 60-7 at halftime on Friday in a game against their county rivals from Wesson that ended with a 75-21 loss for the Cobras.

An O’Mari Johnson rushing touchdown pulled Wesson within 13-7 in the first quarter before the Indians pulled away in the Region 6-3A opener for both the Cobras (3-3) and Hazlehurst (6-0).

Wesson and coach Jeremy Loy will visit another tough region opponent next week when they hit the road to play at Raleigh (5-1).