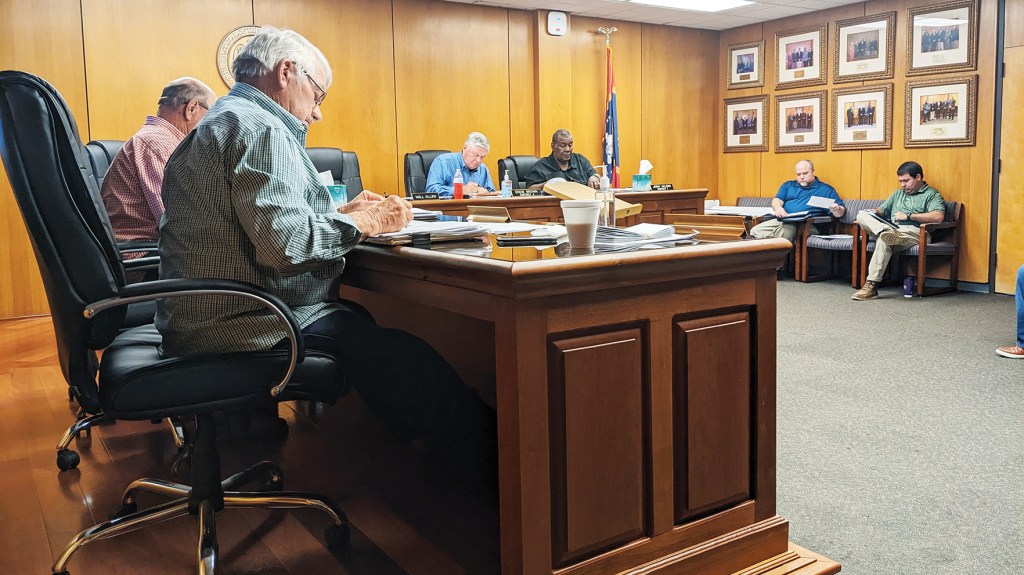 PHOTO BY ANGELA CUTRER The Lincoln County Board of Supervisors met for its regular meeting Monday.

“We received 139.9 percent of our budgeted receipts,” Calcote said during the supervisor’s meeting Monday. “And though total expenditures are 129.1 percent of budgeted amounts through September, it’s a little misleading because while expenses in total are a little over, this was made up for in our overage in revenues.”

Calcote noted the following about the county departments:

• Board of Supervisors are at 175.5 percent of annual budgeted expenditures due to a transfer out of $850,000 from House Bill 1353 projects. “Without this, expenses were only slightly high due to higher than expected liability insurance costs,” according to Calcote.

• The coroner is at 122 percent due to the purchase of a new vehicle in September. The vehicle had been approved before Calcote’s time as administrator, but it had taken all this time to receive it due to supply issues. The purchase was not included in the FY2022 budget.

• Elections remain at 213.7 percent due to voting machine purchases

• The Civic Center is at 130.1 percent due to water well construction that went over budget.

• District 2 was at 144.8 percent due to emergency repairs, payments and purchase of a new tractor

• District 3 was at 188.8 percent due to invoice payments and Hurricane Ida expenses

• District 4 was at 129.9 percent due to an asphalt purchase

• District 1 bridge was at 174.1 percent due to higher payroll costs

Supervisors approved a $297,585 payment to Dickerson & Bowen, which will be split among the districts, approved travel for the sheriff to attend the Mississippi Sheriff’s Association Conference Dec. 5-8, and approved personal reports and inventory control sheets.

Supervisors approved the reappointment of Helen Lynch to the Lincoln County Library Board of Trustees, the advertising for sale of various rodeo equipment from the rodeo barn at the Civic Center and a transfer of ownership from District 2 to District 1 for a paving machine, with District 1 transferring $20,000 to District 2 as payment.

Garrick Combs, executive director of the Brookhaven Lincoln County Chamber of Commerce, told supervisors that several projects had gone forth with positive results, including the AITX expansion and the recent 47th Annual Old Brook Fest. Combs also mentioned that AITX is actively recruiting employees at this time.

The next meeting of the Lincoln County Board of Supervisors is set for Oct. 27 for a payroll and docket meeting. The next regularly scheduled meeting will be Nov. 7 at 9 a.m.