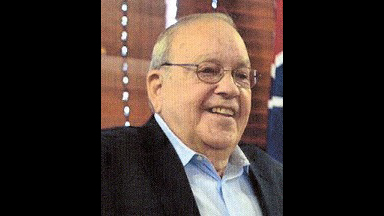 Ramiro “Ray” Alfredo Montalvo, 92, of McComb, MS, peacefully passed away in his home on November 16, 2022, surrounded by his loved ones.

Visitation will be held Friday, November 18, from 5:00 – 7:30 PM at Hartman Jones Funeral Home followed by a prayer service at 7:30 by Rev. Suresh of St. Alphonsus Catholic Church.

A Mass celebrating his life will be held at 2:00 PM Tuesday, December 27, 2022 at St. Alphonsus Catholic Church in McComb.

Ray was the firstborn of Aurora Fernandez Montalvo and Antonio Ramiro Montalvo on October 24, 1930, in Havana Cuba.

He finished high school at Graham-Eckes in Palm Beach, FL. He was the captain of the Tennis, Sailing, Rowing, and Swim teams. He then attended the University of Havana School of Law.

During and after his education, he established two businesses: Montalvo Motor Company and Criollo Beer Company. They were confiscated by Fidel Castro’s government.

Car racing was Ray’s passion. His crowning achievement in professional car racing was his victory in the Cuban Grand Prix (1959), driving a Ferrari Testarossa 250. His racing career ended with Cuba’s fall to Castro.

Ray and wife, Gilda “Cuqui” Henares Moore, and their two eldest children emigrated from Cuba to the United States in 1960.

He returned to Cuba in 1961 as part of the 2056th Brigade, a paramilitary unit made up of Cuban exiles, trained by the CIA as part of the failed Bay of Pigs invasion. The purpose of this mission was to assist in the ousting of Fidel Castro. After hiding in the woods for two weeks, he awakened with a gun pointed to his head. He was captured, along with almost 1200 others. After 22 months as a prisoner of war, the U.S. government negotiated the exchange of the prisoners for a hefty ransom in food and medicine. He was one of the surviving 1,113 prisoners who returned to the United States on Christmas Eve, 1962.

His eldest daughter remembers that as soon as he returned, he said, “Cuba is no more. We are now Americans.”

He worked for General Motors, specializing in exports to South America. After several years, in 1969, he was offered the opportunity to start his own Detroit Dealership in McComb, Mississippi:  McComb Diesel Incorporated.  He and his family moved to McComb in 1970. In 1979, he started D-M Equipment with his lifelong friend, Pat Doyle.

His work—achieving “the American dream”—became his primary passion. Ray added other businesses to the General Motors dealership. These included trucking, forestry, and transportation. After he was 80 years of age, with his son Frankie in charge of the company’s operations, he continued to work every day. Only shortly before he passed away did his appearance at the company become intermittent.

Whatever Ray did, he did with gusto. He continued to fly until restricted by illness.  In his typical style, equally enthusiastic and determined, he earned a commercial Instrument rating, and clocked in over 14,000 flying hours. He flew for business, for fun, for family visits, and for charitable volunteer missions.

And he continued to race cars.  He was a member of the Sports Car Club of America, and won several races, including a national championship within his class.

In 1998, he married Edie Reese Montalvo. Their home in McComb was known for its warmth and hospitality. They joined St. Alphonsus Catholic Church, and were active in St. Al’s community, as well as in the McComb community.

Ray is preceded in death by his parents, his sister Silvia Maria Montalvo, his son-in-law Dr. Roger Bradford, and his father-in-law Benjamin “Hal” Reese.

Ray is also survived by his dearest friend and brother Juan Francisco Montalvo and Juan’s wife Hilda, also a dear friend, living in Wellington, FL; and scores of much-loved nieces and nephews, and great-nieces and nephews; as well as many of his diverse, and beloved friends.