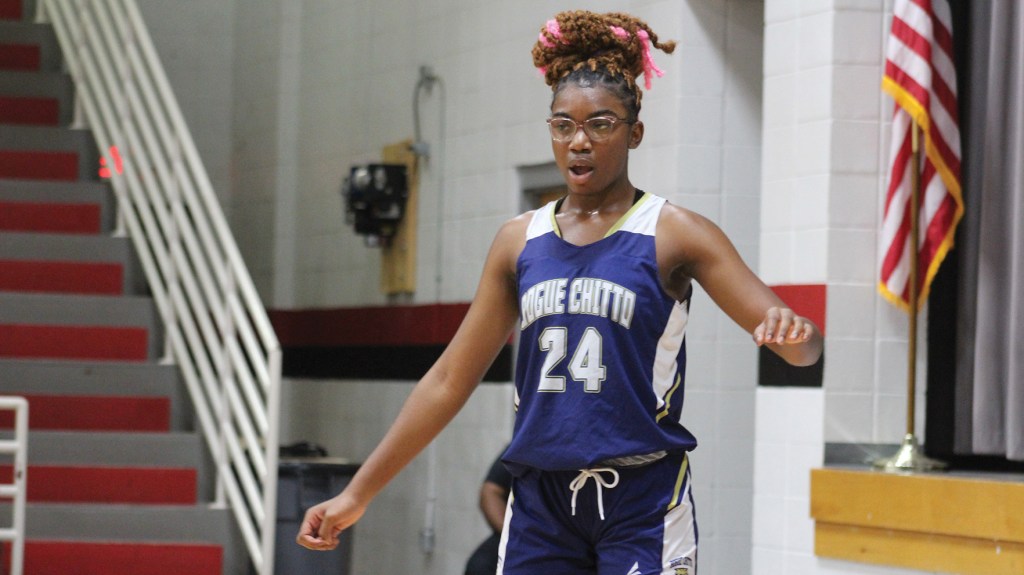 PHOTO BY CLIFF FURR Bogue Chitto junior center De'Mya Porter was a force in the paint for her team on Monday. Porter scored 23 points in a 63-50 win over Lawrence County on Monday.

Many times, a 4A program like the Lawrence County girls’ basketball team can use superior depth in speeding up a matchup with a 2A team like Bogue Chitto.

Friday in the final girls’ game on the schedule at the annual Lawrence County Thanksgiving Tournament, it was the crew from Bogue Chitto that looked most comfortable playing at a faster pace.

Led by 23 points from junior center De’Mya Porter, the Bobcats brought a 63-50 triumph back to Bogue Chitto.

Coach Marc Howard’s team from BC was able to play an inside/outside style of basketball as the guards look towards Porter in the paint in transition and in the halfcourt.

Porter is still a young player that has tons of varsity experience after moving into a starting role as a freshman.

One thing she does better than her peers is meet the ball in the air when it’s thrown her way.

That was important on Monday as LC coach Candice McDuffey has some length on her roster and the Cougar defenders made Porter work to get the ball.

The collapsing defense freed up BC on the perimeter and senior guard Fayth Magee hit some big shots, including three 3-pointers, to make the Bobcat offensive attack that much better. Magee finished with 13 points.

The starters for Bogue Chitto were the senior Magee, her sophomore sister Neeli, freshman Destinee Thompson and junior Tykiara May and Porter.

Senior Kassidi Watts and sophomore Layla McKnight were the only bench scorers for the Bobcats with one and two points respectively.

Avoiding foul trouble with the starters — especially the shot-blocking Porter — will be a huge goal each game for Howard’s team this season.

The Bobcats started the season off with wins over West Marion and Wesson. West Marion won a rematch of the schools 49-46 last Friday. BC is back in action on Dec. 8 with a trip to play at Salem.

Last season the Bobcats finished 13-12 overall and lost by four points to Heidelberg in the first round of the MHSAA 2A playoffs.

The goal is to stay sharp through the next month of games as Region 7-2A play begins after the Christmas break.

“Our starting five have all been working on their individual games outside of practice with each one coming to the gym during breaks and weekends to get shots up,” said Howard. “We’ve had a tendency to rush things at times and tonight was the best job we’ve done at being controlled.”

A Fayth Magee 3-pointer gave the Bobcats a 33-31 lead early in the third quarter and then later in the period she knocked down another triple that grew the lead to 44-34.

In other girls’ games played Monday at Lawrence County

The Brookhaven High girls’ team has won three in a row after a 47-17 drubbing of Jefferson Davis County on Monday. On Friday at home, BHS had beaten Lawrence County by a 49-31 final score.

Coach Preston Wilson was able to substitute liberally in the game on Monday as his team held the Jaguars scoreless in the second quarter and were up 30-7 at the halftime break.

Senior center Leah Wilcher led the Panthers with 12 points in the win on Monday and senior guard Angel “Cookie” Wilkinson paced BHS with 16 points in the Friday night victory over Lawrence County.

Brookhaven High (7-1) is back in Sinclair Gymnasium on Friday, Dec. 2.

The Parklane Pioneers beat Loyd Star 60-32 in the first game of the day Monday.

The Hornets got at team high 10 points from senior Alyssa Leggett in the loss.