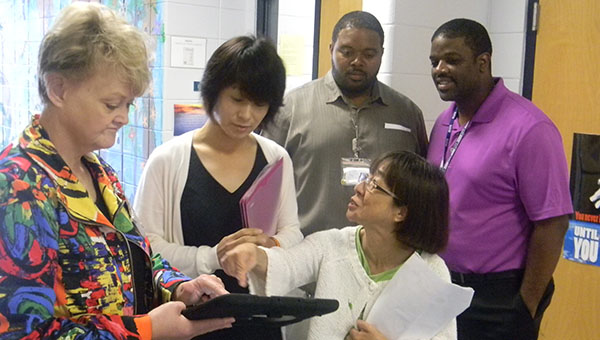 PHOTO SUBMITTED / Donna Horton, director of client services at Mississippi Adolescent Center in Brookhaven, demonstrates a program called Talking Tiles with Yukari Ogita, member of the Osaka Prefectural Assembly, Health and Welfare Committee, of Japan, and her translator during a recent visit to the local facility. Looking on are Eric Brown, director of staff development at MAC, and Bobby Alsworth, principal of MAC.

The Mississippi Adolescent Center of Brookhaven hosted visitors from halfway around the world earlier this month.

Yukari Ogita, a member of the Osaka Prefectural Assembly, Health and Welfare Committee in Japan, was accompanied by her translator on a tour of the local center Aug. 12. Ogita was invited to the United States under the auspices of the U.S. State Department’s International Visitor Leadership Program, said Donna Horton, director of client services at MAC.

Ogita was in Mississippi Aug. 10-13 touring selected Mississippi Department of Mental Health facilities and seeking to understand public health policy in the United States towards those the physical, mental and developmental disabilities.

Her interest in how adolescents with Intellectual Developmental Disabilities and those with Autism Spectrum Disorder are cared for within state facilities brought her to the Mississippi Adolescent Center, Horton said.

The visit was coordinated by the Jackson International Visitors Bureau, which is the Mississippi branch of the United States State Department in Washington, D.C. 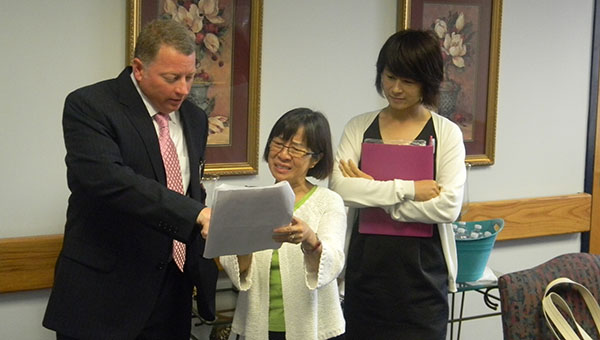 PHOTO SUBMITTED / William Gates, director of the Mississippi Adolescent Center in Brookhaven, (from left) discusses the services provided by the center with Yukari Ogita, member of the Osaka Prefectural Assembly, Health and Welfare Committee, of Japan, as her translator looks on. The Japanese visitors toured the local center earlier this month.

“We were thrilled for the opportunity to showcase what we do at MAC,” Horton said. “Mr. Gates and I explained our admission criteria and the admission process. We then provided an overview of the services that we provide,” Horton added.

“There was a question-and-answer period where Ms. Ogita asked specific questions regarding our programs, transition services, percentage of individuals transitioned back to home setting and support for the individuals and their family once home,” Horton continued.

Ogita received an in-depth overview of the center’s program, services offered and special population served. She also received a tour of the buildings and grounds.

“She enjoyed seeing the students in the classrooms and our education staff interacting with them,” Horton said. “I also took the opportunity to show her the Talking Tiles application that we are using in the classroom with the tablet computers and some of the programs that we utilize.”

The Lincoln School District Board of Trustees approved the request to advertise for lease bids for a parcel of 16th... read more