A Brookhaven student with a love of reading received the second highest score in the state on the third grade reading gate test.

Despite his being an A-student, Alisha McGehee said she and her husband, William, were still surprised to find out at Brookhaven Elementary School’s awards day ceremony that their son, Zachery, had made the second highest score in the state on the test. Out of a highest possible score of 1200, Zachery scored 1132 on his test.

McGehee said the day Zachery took the test she asked him how it was to which he replied, “It was easy. I got this. Don’t worry about it.” She said the school sent each student’s test scores home but since she had nothing to compare it to, McGehee did not think twice about the score being high or even close to highest.

“We were all very proud,” BES Principal Shelly Riley said. 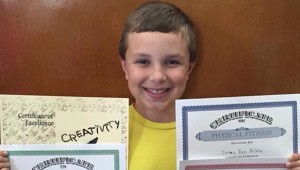 Photo Submitted
Zachery McGehee shows off his awards after BES’s awards ceremony in May, where it was announced that he had made the second-highest reading score in the state on the third grade reading gate.

She said results they received did not show if Zachery was the only student in the state with the score but did indicate he was in the group of students who made a 1132 out of 1200, the second highest score to be made.

“This was a new test and new adventure for all of us. I’m proud of the students as well the teachers. It’s great we have such vivacious readers,” Riley said.

McGehee said they’ve read to their son since he was a baby.

“It’s a great way to open him up to new things and lean new words,” McGehee said.

She said they’ve always kept books in the house. Every time he brings home order forms from the Scholastic Book Fair he’d want books, and they’d purchase them for him. She said that they’ve also had people give them books for him to read as well.

Riley said what the McGehees are doing with their son is a good example and that the earlier children are exposed to reading the better.

“So many of our children aren’t exposed to that,” Riley said about the McGehees’s reading history with their son.

For those who don’t have such a rich reading atmosphere outside of school, Riley pointed to the school’s emphasis on reading throughout all of its classes. With reward and incentive systems in place and tests every nine weeks, Riley said they try to make sure BES students are getting the practice they need. However, she said it’s still very important that children are able to practice reading at home.

In assessment results released in May by the Mississippi Department of Education, Brookhaven School District had a 75 percent pass rate on the reading assessment. BSD initially had a 25 percent fail rate, which has since been reduced to 12 percent after a five-day intensive reading session and retest. There will also be a retest later on in the summer.

McGehee, whose son’s favorite book is currently “Diary of A Wimpy Kid,” just hopes that her son continues to express a strong interest in reading as he moves forward in his academic career.