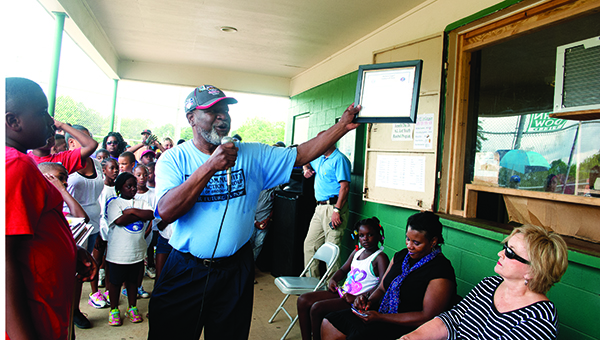 Roy Smith, A.L. Lott director, said the program has received its charter through Little League and will be eligible to compete in the district tournament and move all the way to the World Series.

However, Smith said the mission of the league remains the same, to build good character and citizenship.

“We’ve been teaching our children to be gracious losers and humble winners,” he said.

Smith said since the program began five years ago juvenile delinquency, school suspensions, school violence and community violence is down.

“Our program is working,” he said.

“I’m proud of this, and we’re ready to win a World Series,” Smith said.

Nancy Thompson, a motivational speaker from Greenwood, spoke at the ceremony and encouraged the players and parents to realize that the work is about much more than just baseball.

Parents have the opportunity to encourage studying, prayer and discipline.

A local volunteer firefighter who was suspended for soliciting minors over the Internet was reinstated Monday. Lincoln County Fire Coordinator... read more